Perhaps we’re clutching at One-Straw Revolutions, but an interesting thing happened recently that we thought was worth sharing. Sydney Morning Herald writer Rachel Olding emailed us to ask whether they could use the Food Forest as a site to photograph a local chef foraging for his slow food restaurant for a story she was writing. We politely declined:

Dear Rachel,
Thank you for your email.
If Jared were cooking the food for a community event, then yes absolutely, we would be thrilled for him to be photographed in the Food Forest.
As we’re sure you can appreciate, the principles of the Food Forest are to promote public, uncapitalised food. The Forest supplies local residents who might not be able to afford organic food, and the church’s weekly soup kitchen.
We applaud the ethics of The Danks Street Depot, and what Jarred and Melanie are championing, but it still comes down to the Forest being a public resource, that celebrates the free transaction over anything monetary and exclusive.
Best of luck with the shoot, and apologies we were not able to be of help in this instance.
Meg, Patrick and Zephyr — The Artist as Family

Olding’s article is great in terms of promoting the relocalisation of food resources and providing creative ways for getting off a heavily polluting agriculture grid (that’s responsible for around 40-50% greenhouse gas emissions and wholesale deforestation). In this way the Waterloo chef’s ideals and ours are similar. But it’s the privatisation of public food resources we object to.
What Olding’s article doesn’t raise is the problems of privatisation, ecologically and socially, or how this chef’s activity is akin to business taking content from blogs licensed under creative commons and capitalising on the material. Why should a restaurant owner take food from a community garden or public commons (ie foraging for edible weeds in Centennial Park) and then put a price on it? 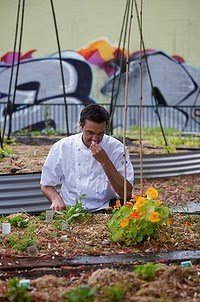