Subscribe
Patrick has drawn a new map to show our findings. If Melbourne is serious about being zero-carbon then bottled water (and anything disposable) has to rapidly become an outmoded commodity. 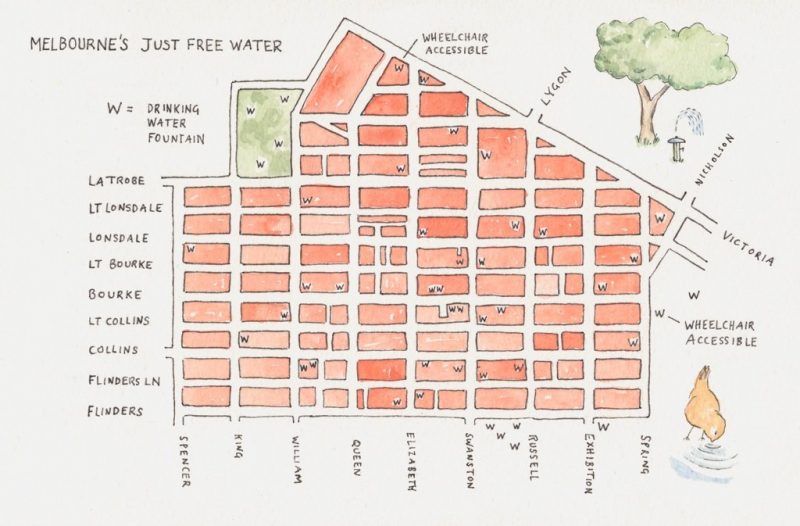 Please feel free to distribute this map widely (copyright is just another form of privatisation).


Thanks to Designscope for scanning.

We found our first bubbler of the day near the corner of Lonsdale and Spencer streets at 8.35am. 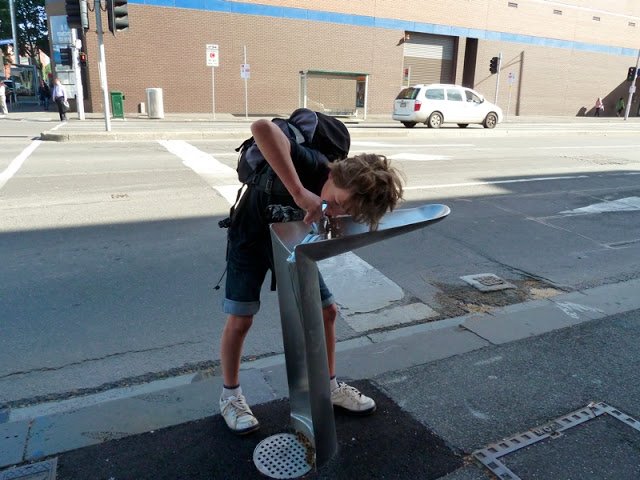 We found that to make sure we didn’t miss any of the bubblers in the chaos of the city we had to slow right down. 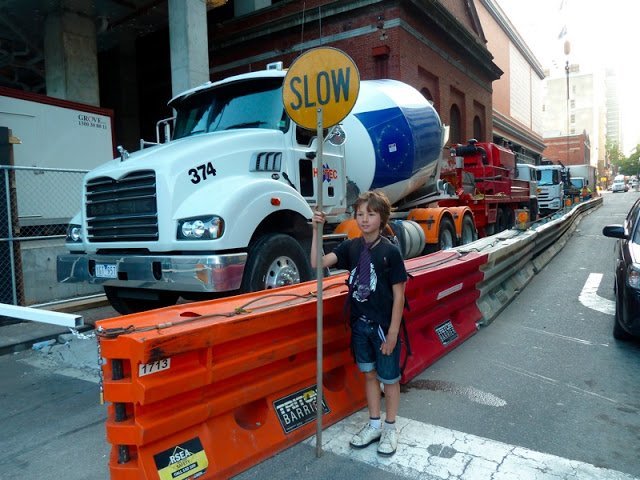 We found the entire contents of somebody’s home out in the street. What a lucky country we live in that so much waste goes unwanted. 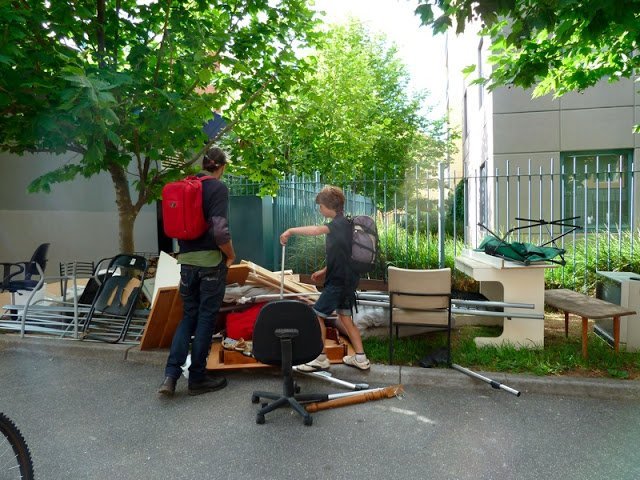 We found our friend Brett who joined us on our audit. We found him at the lovely Kinfolk café, which is staffed by volunteers and whose profits go to a selection of different charities. 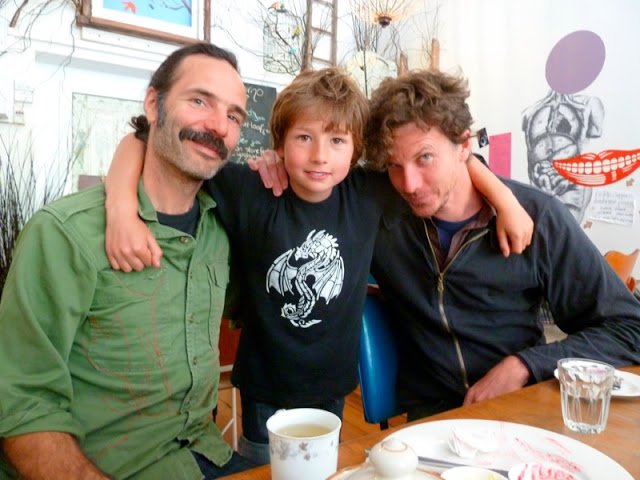 We found that although we only drink rain water at home, we loved drinking a toast to all the working bubblers we came across. 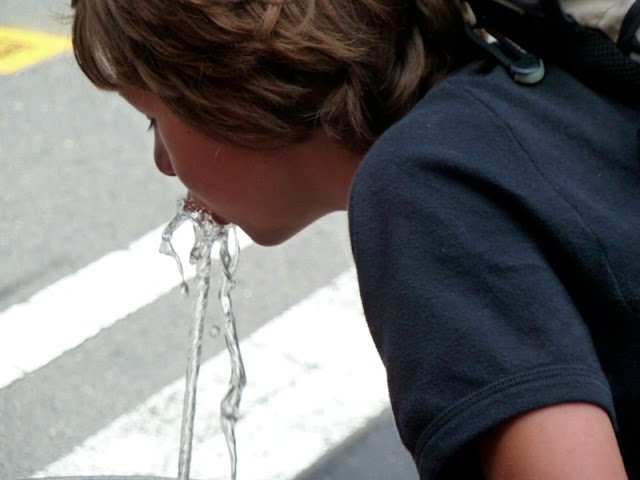 We found that after a while we even started acting like water bubblers. 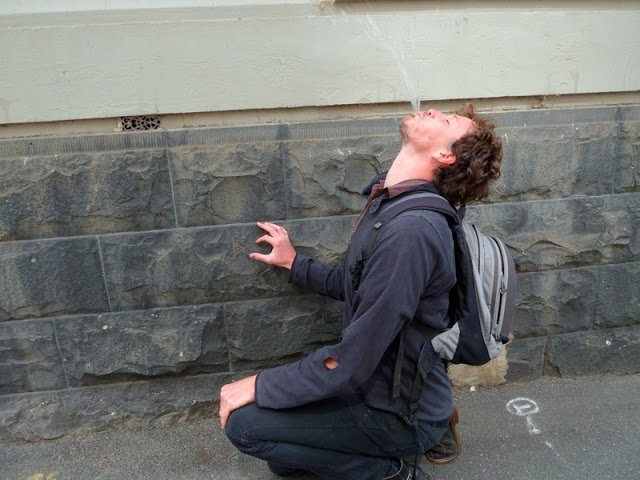 We found that we started seeing bubblers even when there weren’t any. 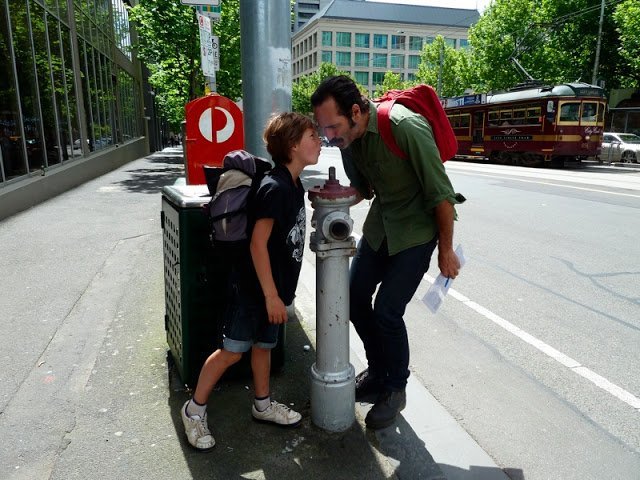 We found a few over-zealous bubblers. 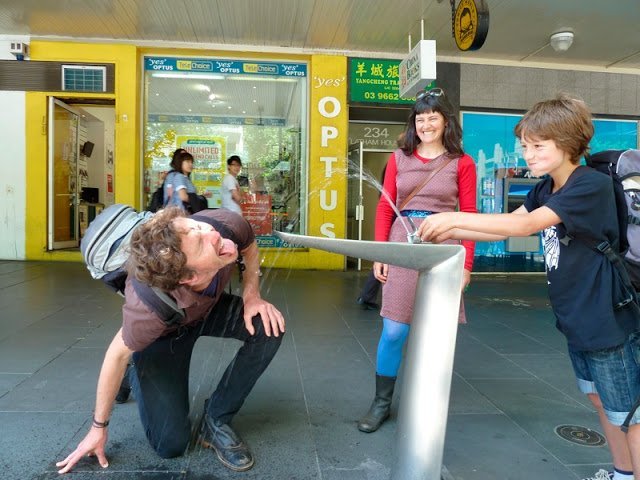 We found lots of important reasons to carry out our audit. 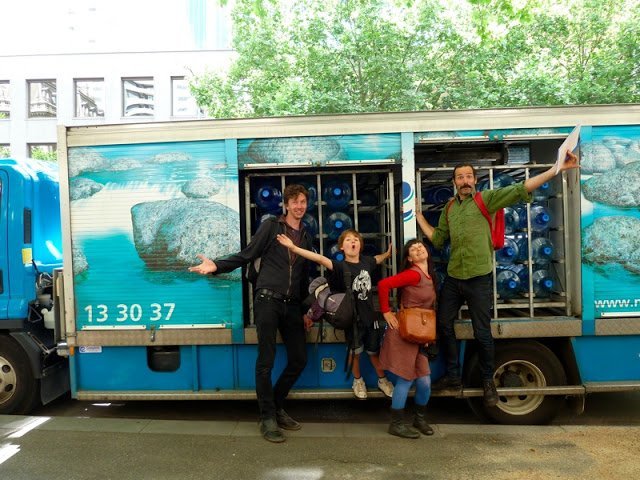 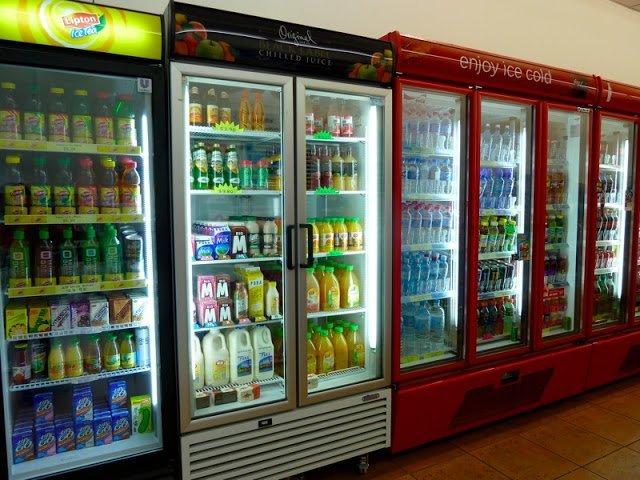 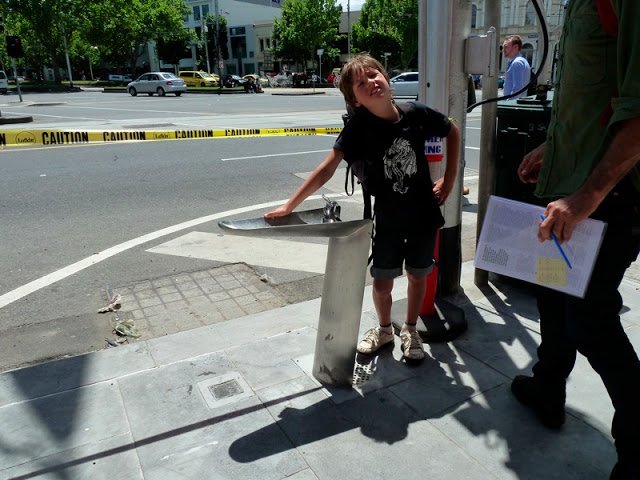 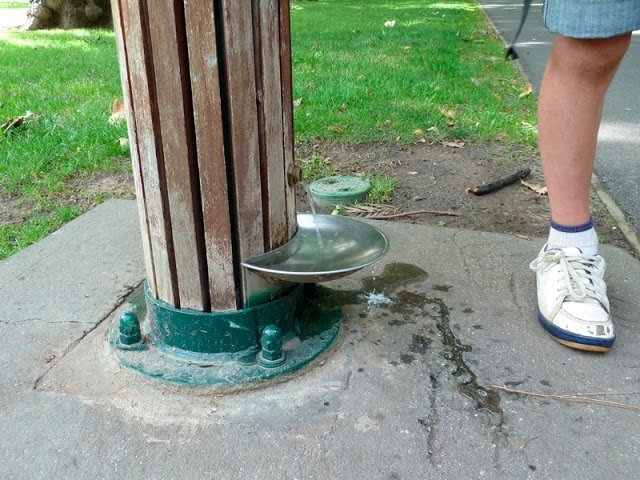 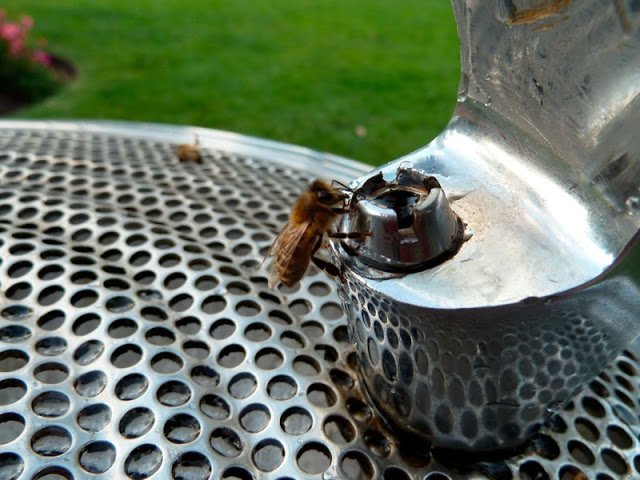 We found the wasteful remains of the winning entry in the 2011 Melbourne Urban Prize for sculpture. 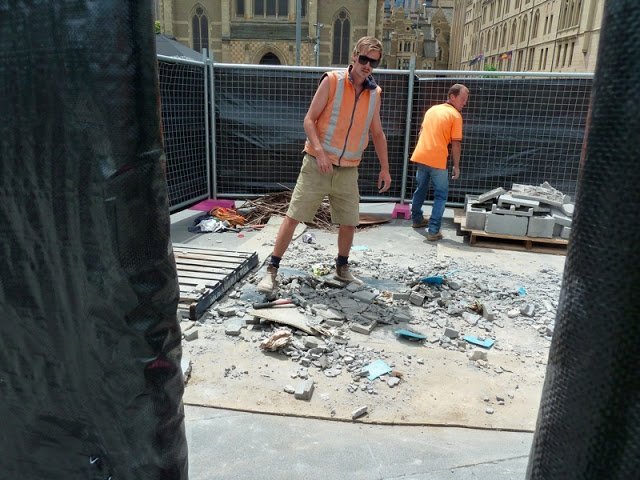 We found bubblers being repaired. 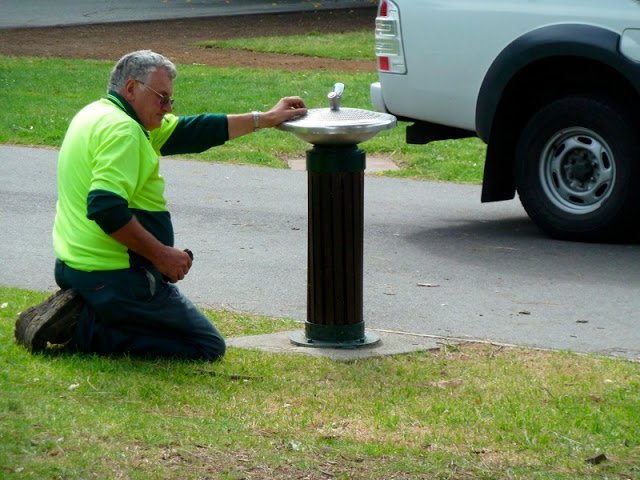 We found bubblers from great heights. 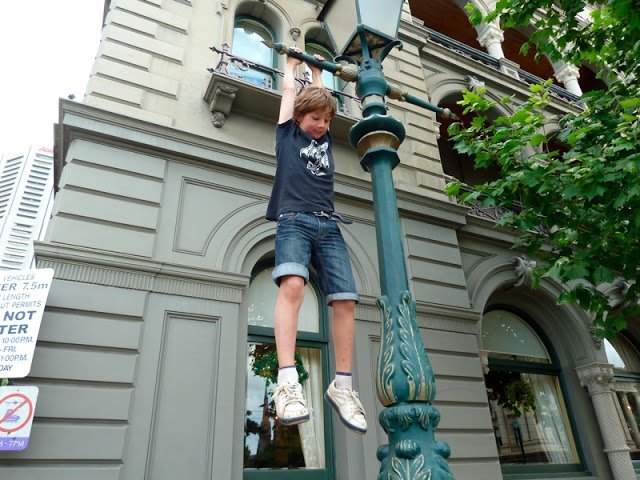 We found some very brave people at the Occupy Melbourne protest; people willing to stand up to the corporate greed that is killing our planet. 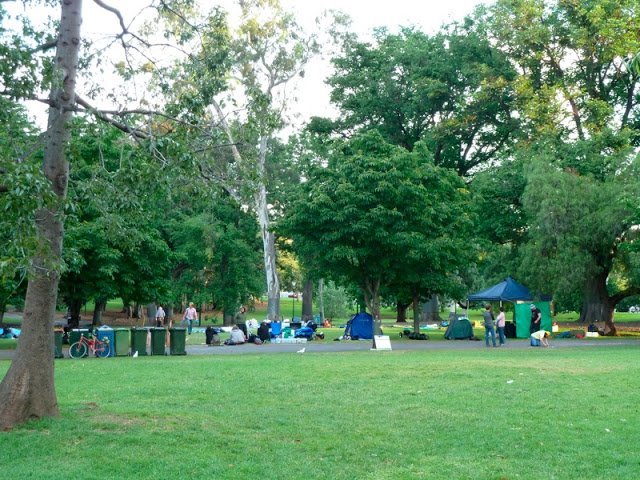 We found some great examples of people growing their own food. 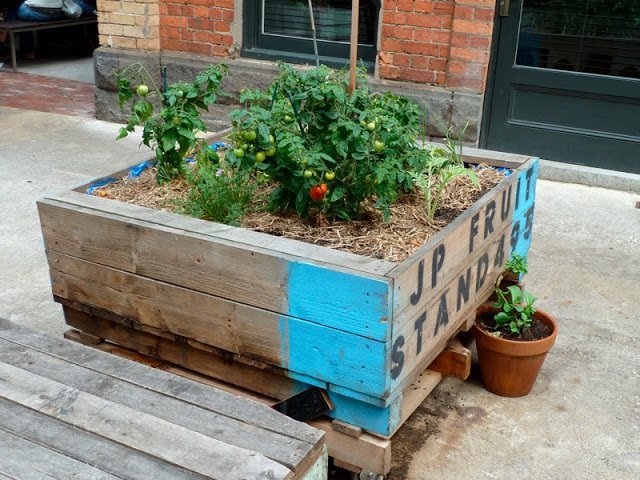 We found people will go to great lengths to get a drink of water. 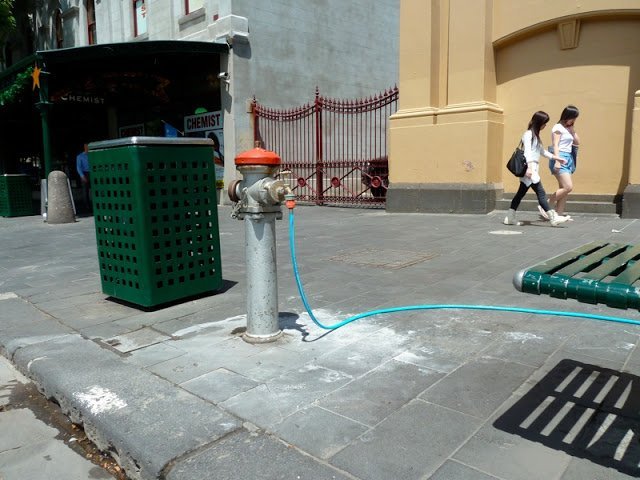 Overall what we found was very positive compared with Patrick’s findings from four years ago. 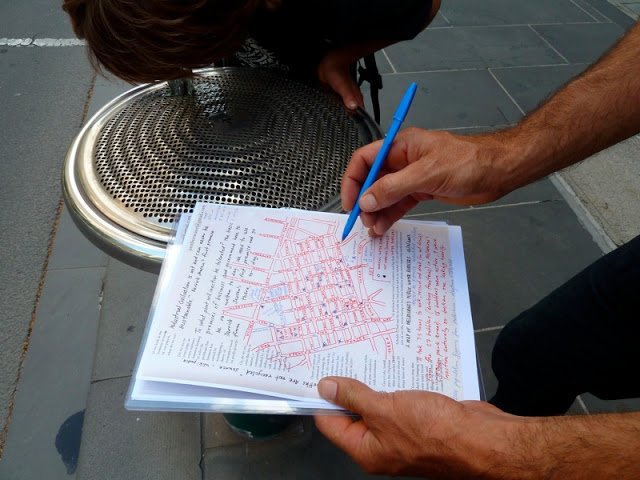 And lastly we found that walking over 15km auditing Melbourne’s bubblers sure did make us sleepy. 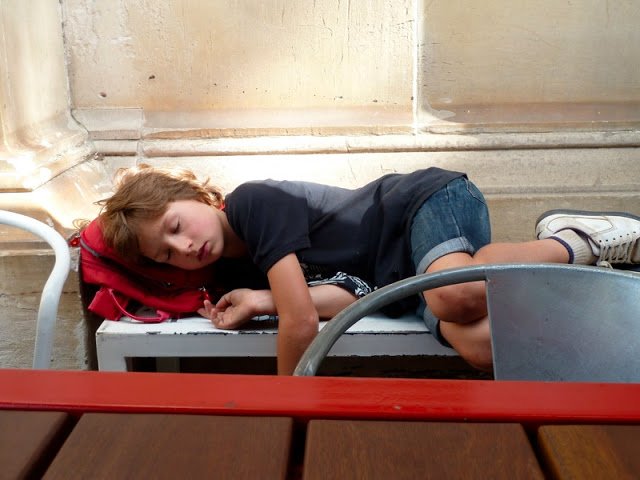 Four years ago, Patrick spent a day walking through Melbourne auditing the drinking water fountains in the CBD. His walk revealed that there was one working bubbler per 40,000 people in the city. He charted his findings on a map which he made freely available: 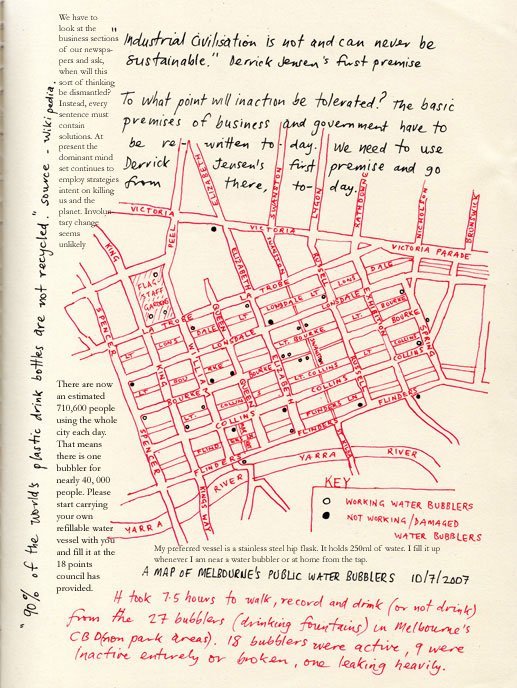 This coming Monday the 21st November, Artist as Family will spend the day retracing Patrick’s walk through the CBD as we re-audit the city’s bubblers. We want to find out if the City of Melbourne is still committed to encouraging bottled water pollution or whether they’ve begun to transition to a sustainable and just free water supply by repairing all the broken bubblers and installing new ones for thirsty summer city dwellers.

Did you know that for Australians to drink bottled water, over 500,000 barrels of oil are required every year??

If you live in Melbourne, please feel free to join us for any part of our walk. We will have a mobile with us, so please call or text to lend us support or to find out our whereabouts: 0418 523 308.

Stay tuned for the findings of our audit.