Subscribe
We had three wet, windy but nonetheless restful days in Lawrence. 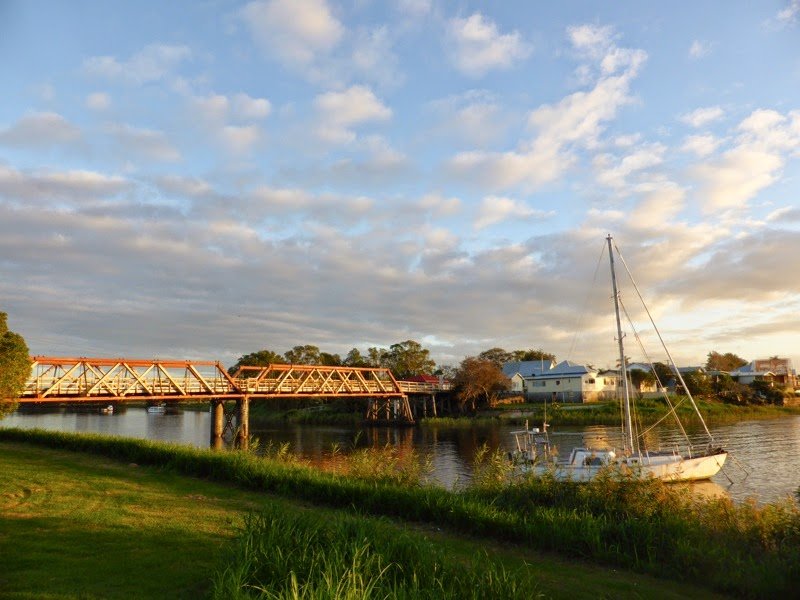 Our tents took a battering from two large storms but we remained fairly dry and warm. We fished catching only undersized bream (Abramis) from the Clarence, 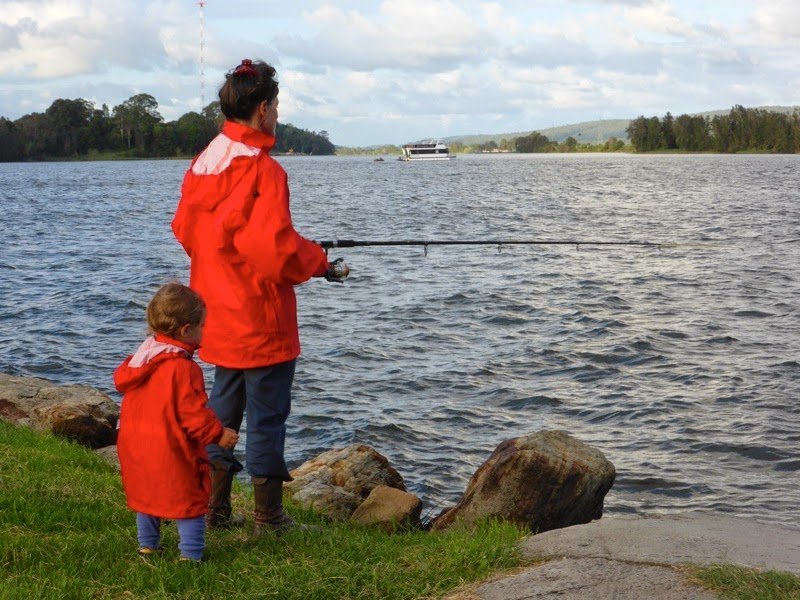 and we learnt about these relative newcomers, cattle egrets (Bubulcus ibis), which are the smallest species of egret that live in this region. 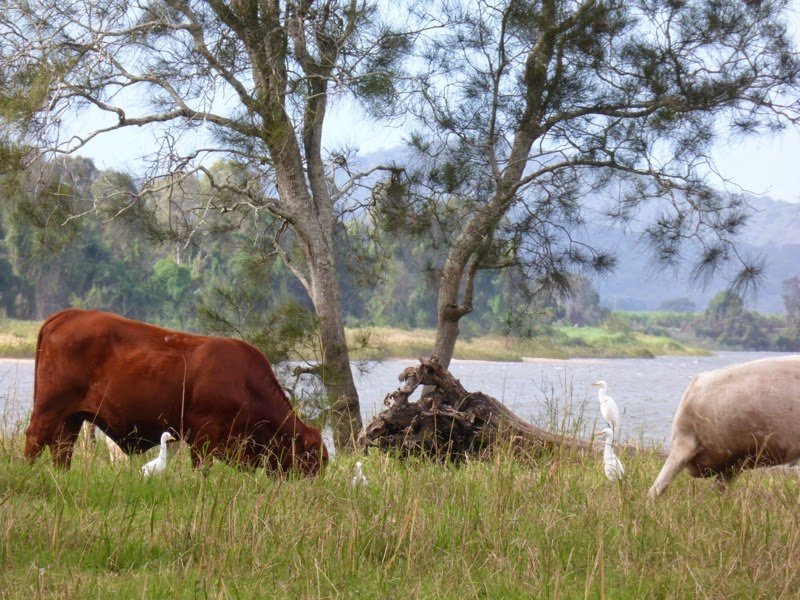 This country is blessed with a diversity of bird life no longer seen in most parts of the world, and every morning we wake in some bird-rich neighbourhood singing their praises. But this region around Lawrence is even more exceptional for its bird life. Hundreds of feathered species live here as permanents or seasonal migrants, and all day their activity is pronounced in this quiet little town. 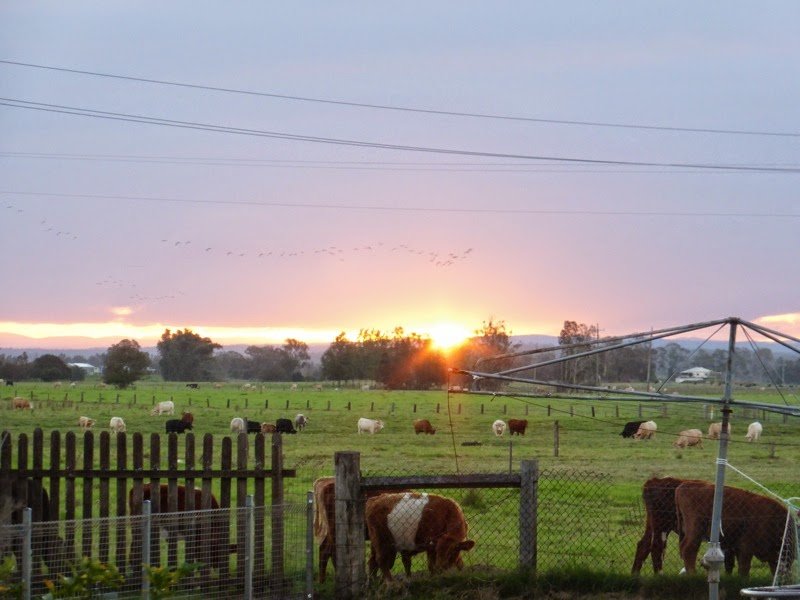 We made long leisurely walks and picked a belly full of guavas, 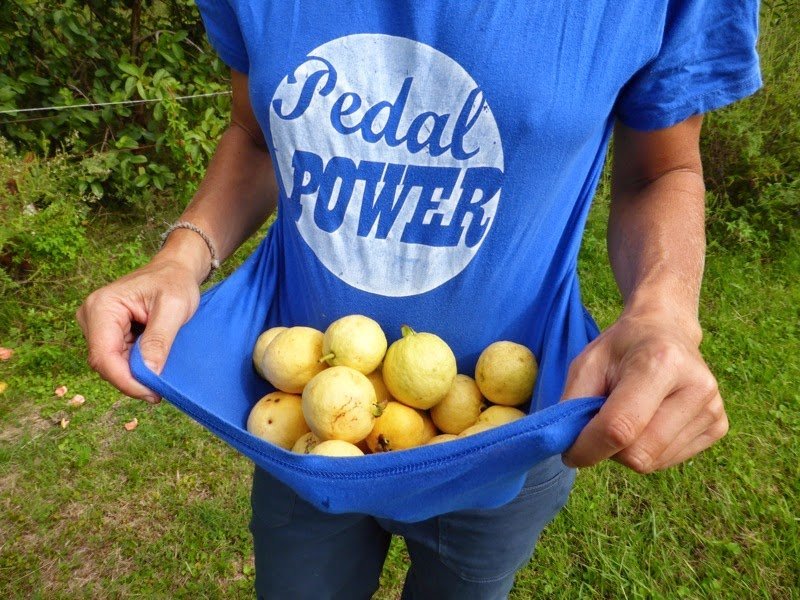 from this guy’s paddock, 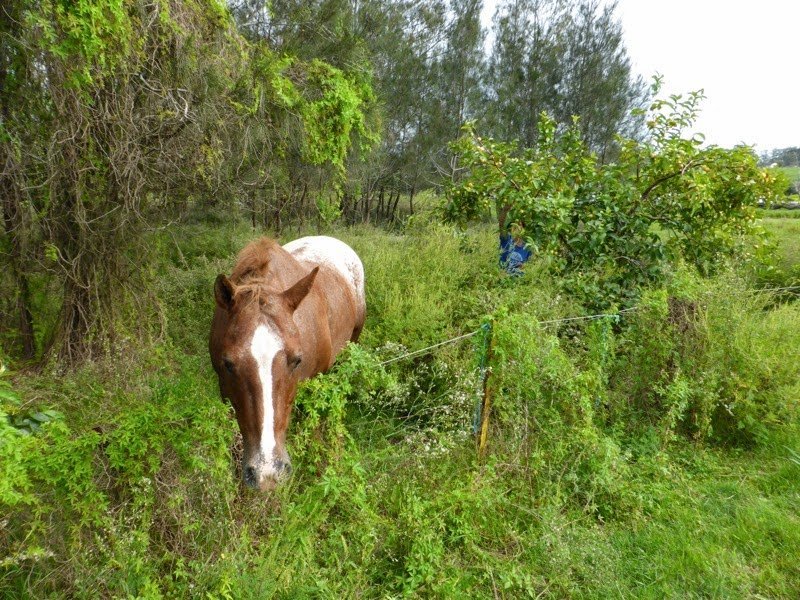 which we woofed down with grunting rigour. 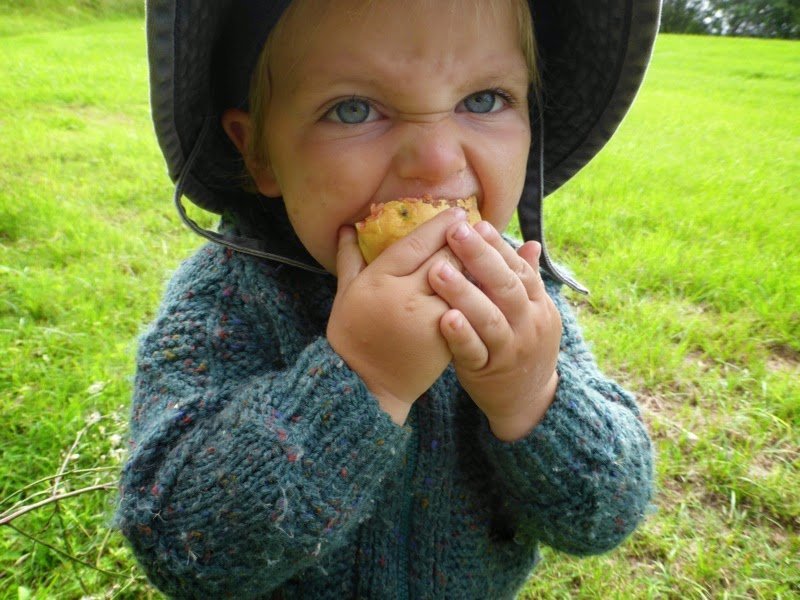 We tried some local cumbungi (Typha), from a roadside bourgie café, but found it was a little stringy at this time of year. 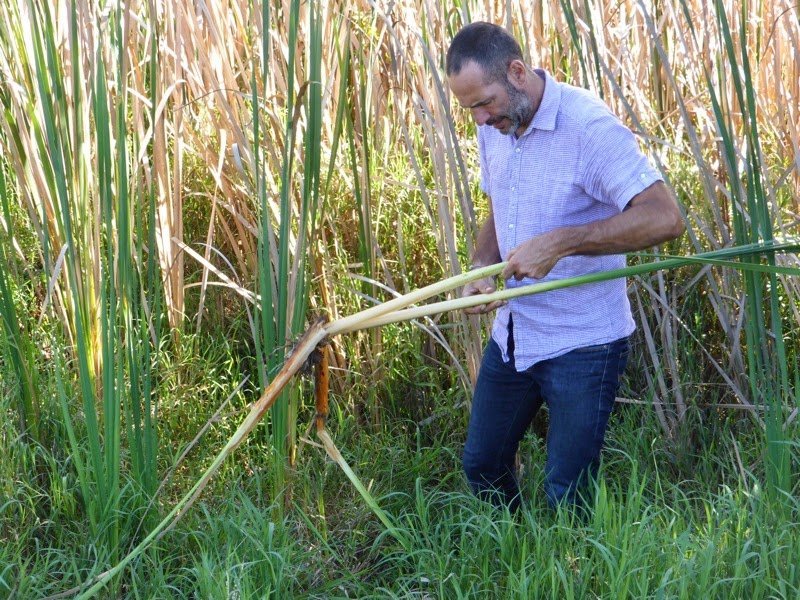 While in Lawrence pecans and guavas were our greatest finds, 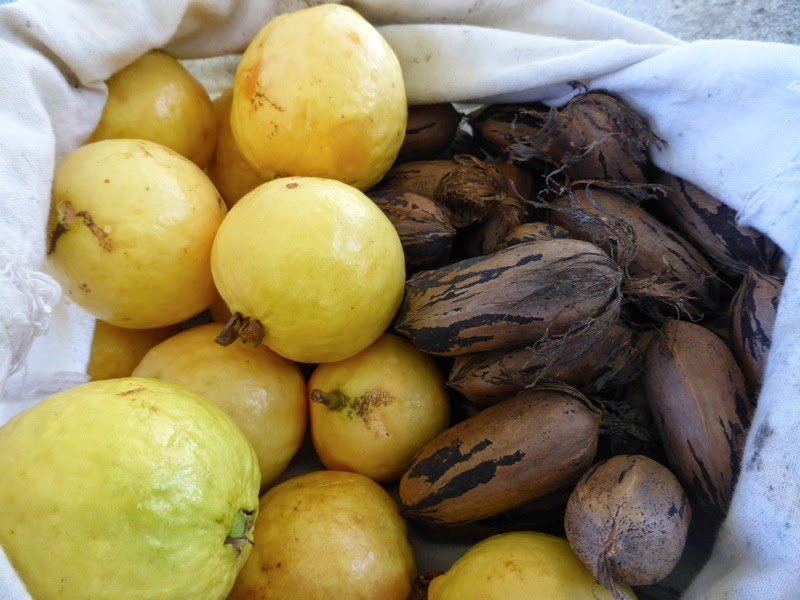 and with local bananas and farm gate cucumber they made a fine start to the day. 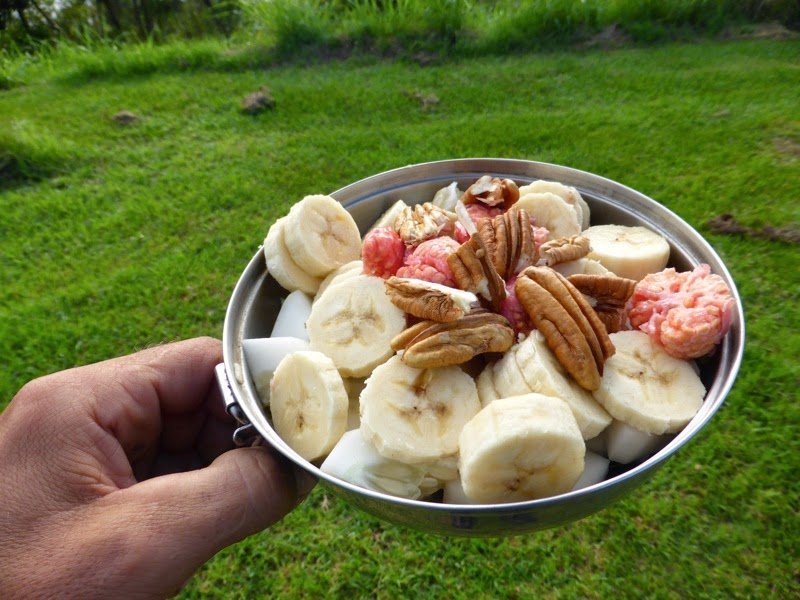 After breakfast and after drying out the tents we departed Lawrence by catching the ferry punt across the Clarence. 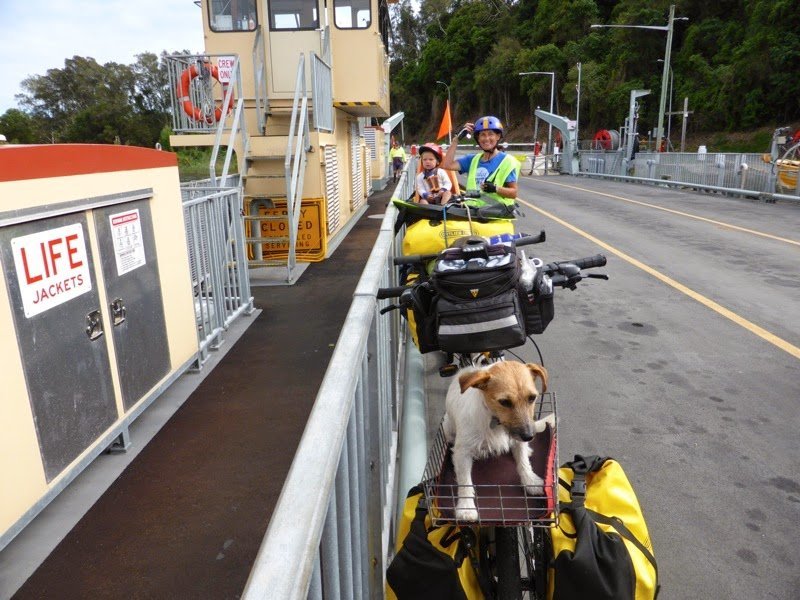 We passed a barn that seemed to be in hiding, or was it just shy? 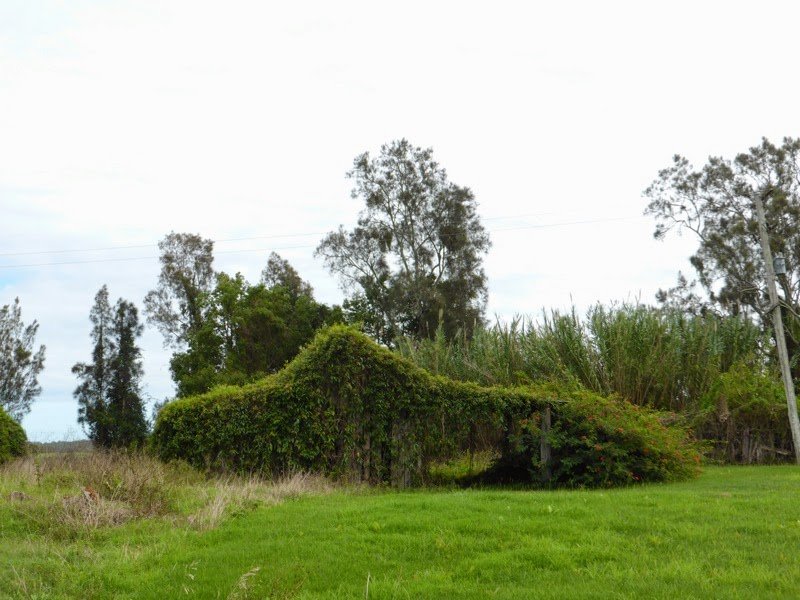 We passed houses that were being retrofitted for the aggregating effects of climate change – people are preparing even though their governments, who could greatly help mitigate the effects, are not. 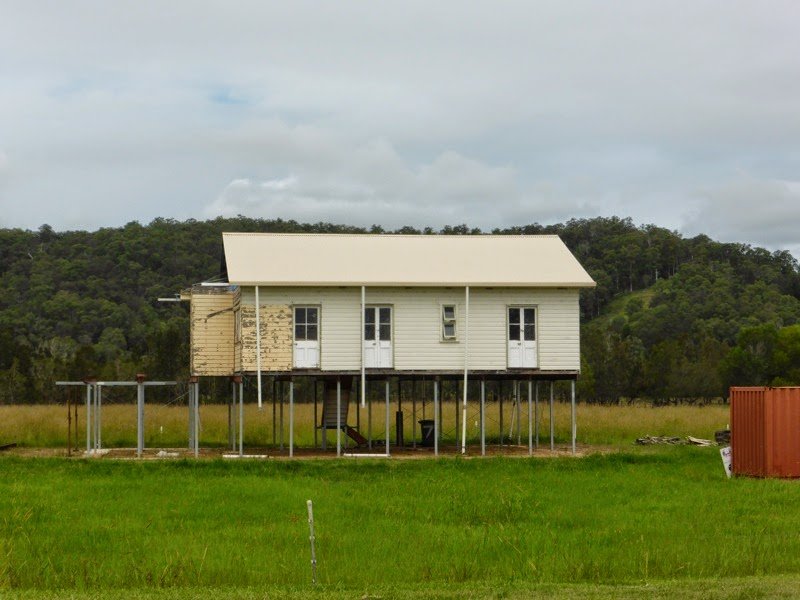 We spotted a Black-necked Stork (Ephippiorhynchus asiaticus) that, like the beginnings of the sugar cane monocultures just south of Lawrence, signifies we are entering the north of Australia. 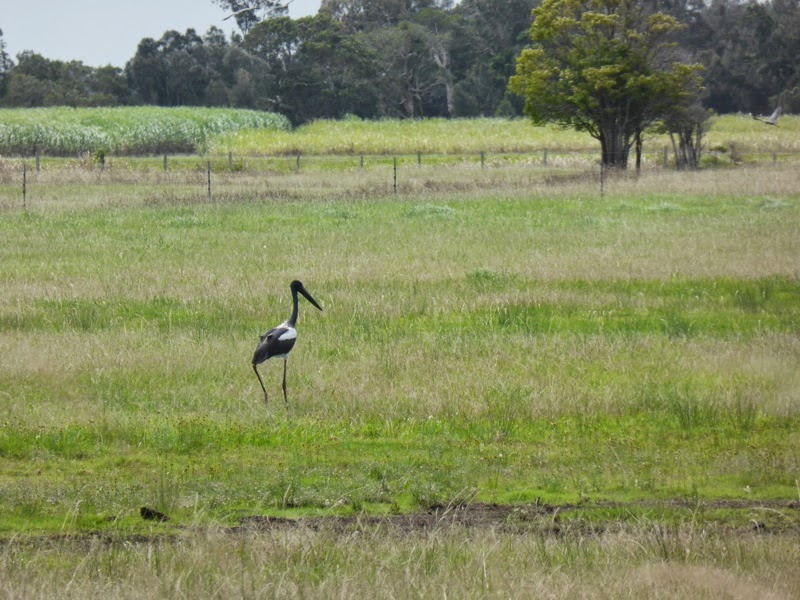 We arrived in Maclean to a spot of op-shopping (undies for Woody and some local pickles), 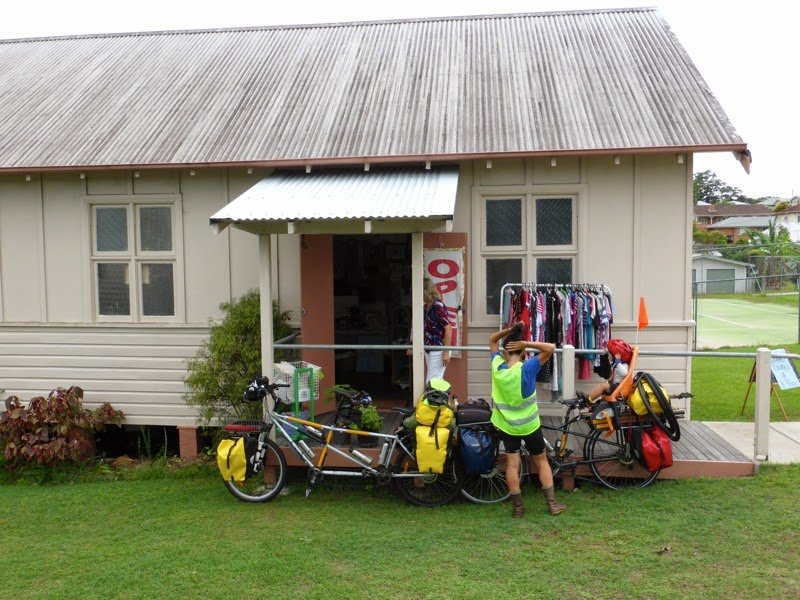 and looked for a place to camp. But none availed in Maclean so we rode on to Yamba, found a site on Hickey Island and moved in. 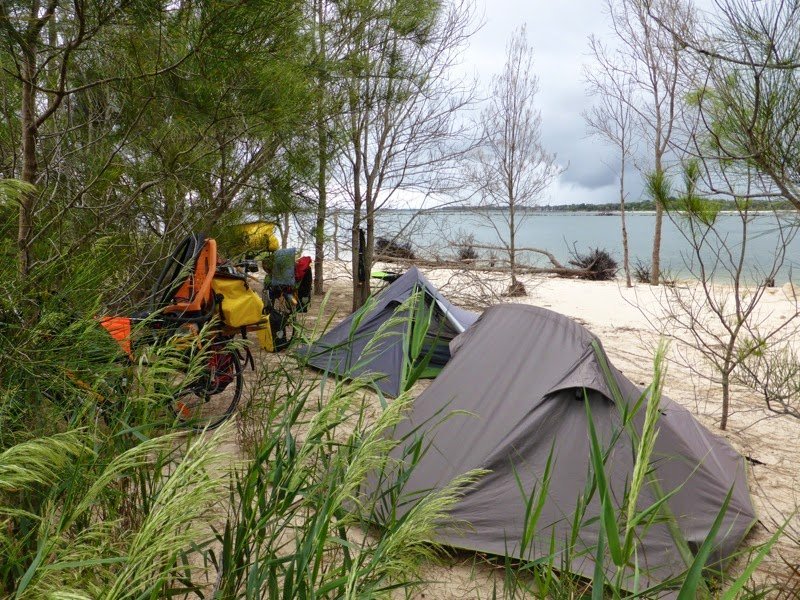 Looks magical doesn’t it? Don’t be fooled by the frame you’re peering through, this image doesn’t reveal the millions of tiny predators that all vied for our blood from the moment we arrived. This is more the reality:
If you’re not used to them, like us, sandfly bites are extremely itchy. Mozzies are definately preferred. We tried to forget both despite their large numbers in Yamba and headed along to the mid-weekly farmer’s market where we bought garlic, corn, zucchini, capsicum and a few of these old variety cucumbers. 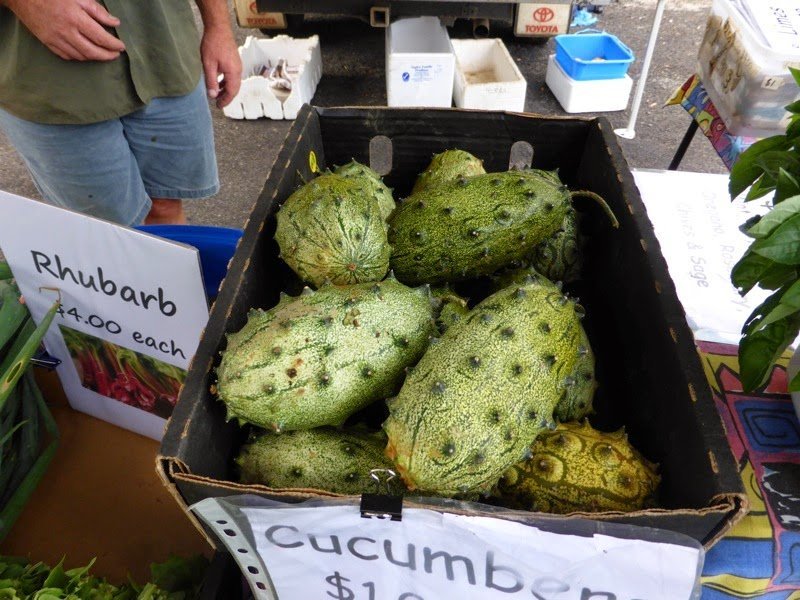 In the public park where the markets were held we discovered pandanus fruit (Pandanus tectorius), parts of which are edible when roasted and parts can be eaten raw. A fruit we’re eager to try once we come across a ripe one. 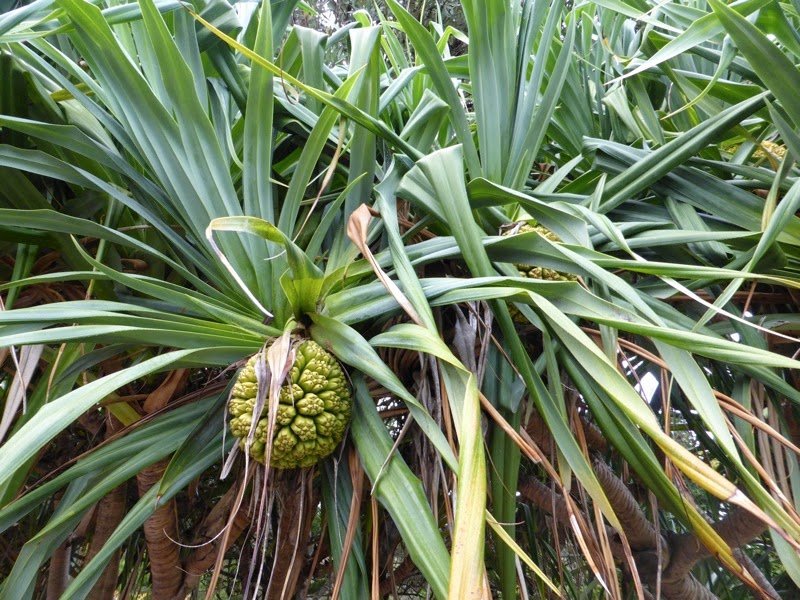 Yamba also boasts edible community gardens throughout its streets, encouraging people to pick the herbs, fruits and vegetables growing there. 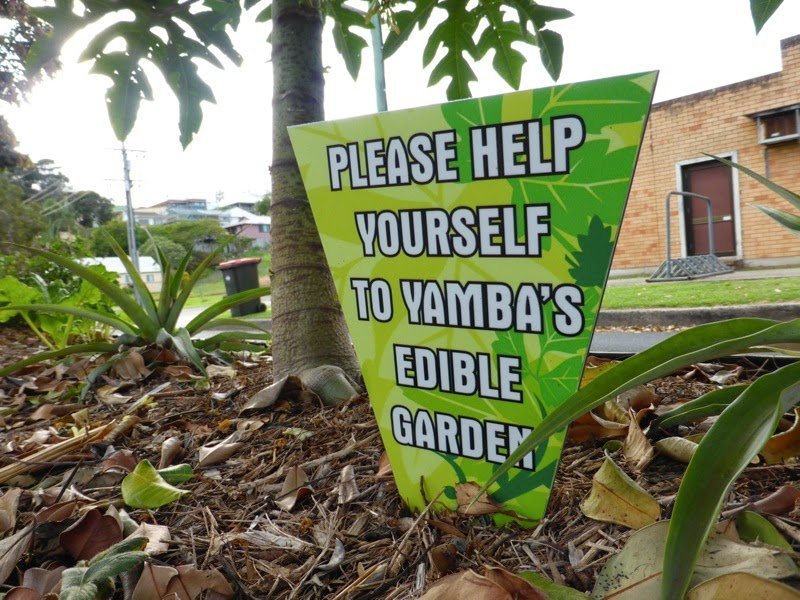 We like Yamba but felt we couldn’t camp another night because of the insect life, and so we decided to catch the ferry over to Iluka and ride 15 kms north to Woombah, where Deanne, the sister of the delightful Sonia who we met back in Avoca, was offering us hospitality. We had a few hours before the next ferry, so we set up a Woody nap tent in a local park (to say the mozzies swarmed here is no exaggeration), 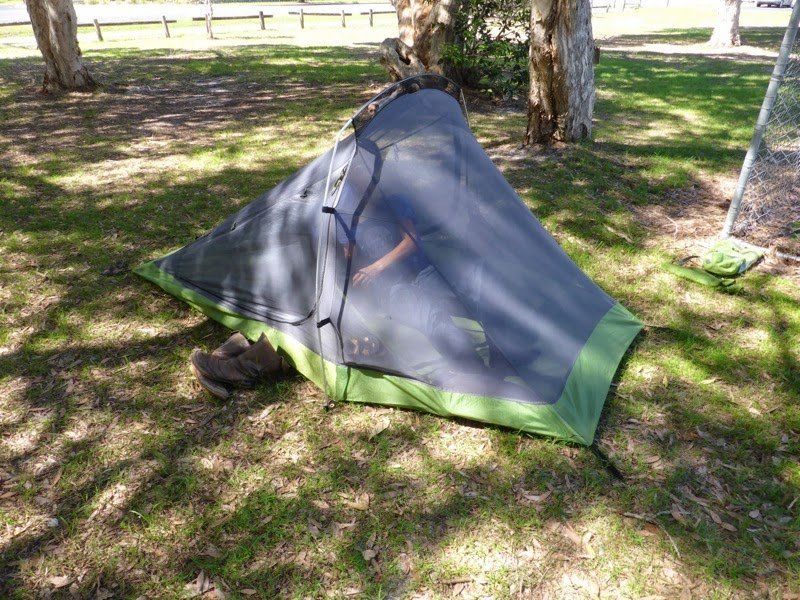 while Patrick visited the local bike shop, as the tandem was having problems again. Bill from Xtreme Cycle and Skate took the rear wheel axle apart but didn’t have the right size cassette pawls to replace the ones he discovered were damaged. The tandem was still rideable though and we thought it could make it to a bike shop in Ballina. Despite his time and effort, and giving us a place to charge our phone, Bill refused payment. Thanks so much Bill! 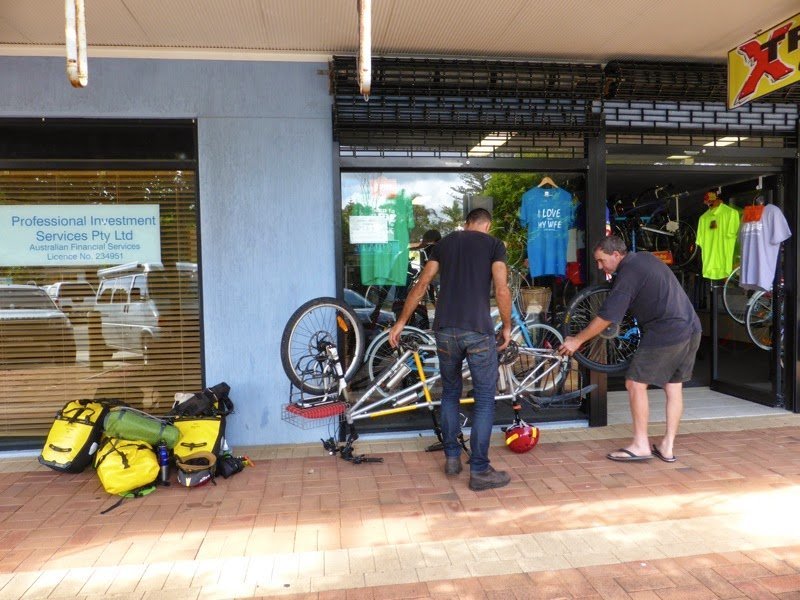 We rolled onto the ferry and were greeted by the effervescent Linda, who accommodated a family on extra long bikes with great enthusiasm. 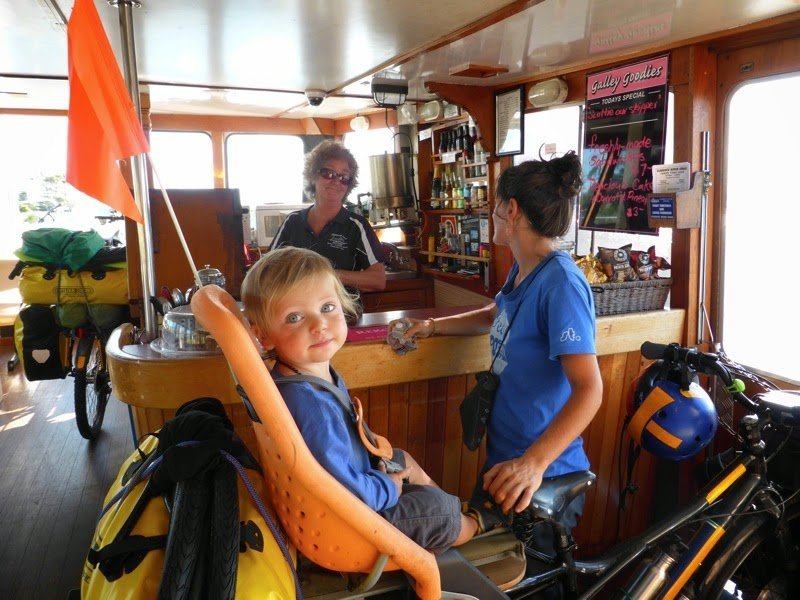 By the end of the ferry trip Linda had offered us her granny flat in Iluka. We were extremely grateful because the tandem didn’t last the short ride to Linda’s before it became unrideable. We were grateful too for a warm shower, something we hadn’t had for a week. Thanks for ferrying us to your sanctuary, Linda! 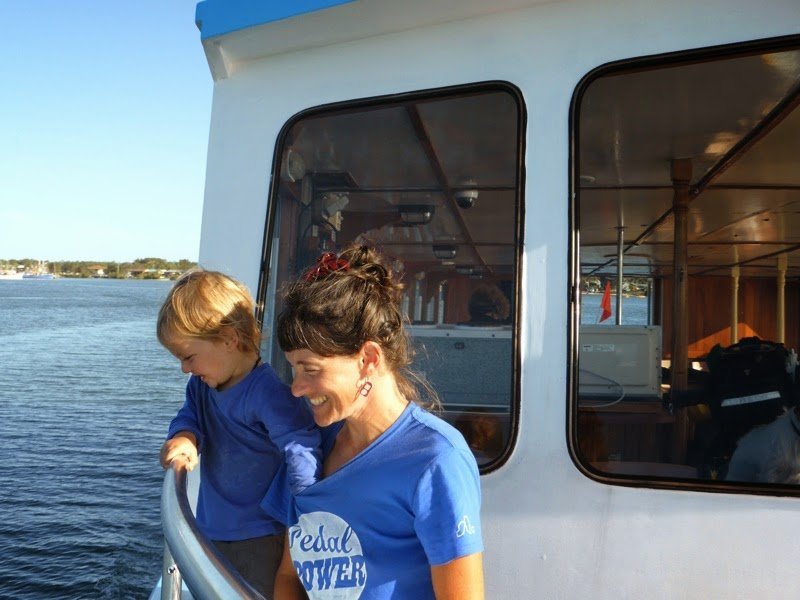 So, we were in Iluka, being hosted by a lovely lady and her son, Nicholas, with everything we required 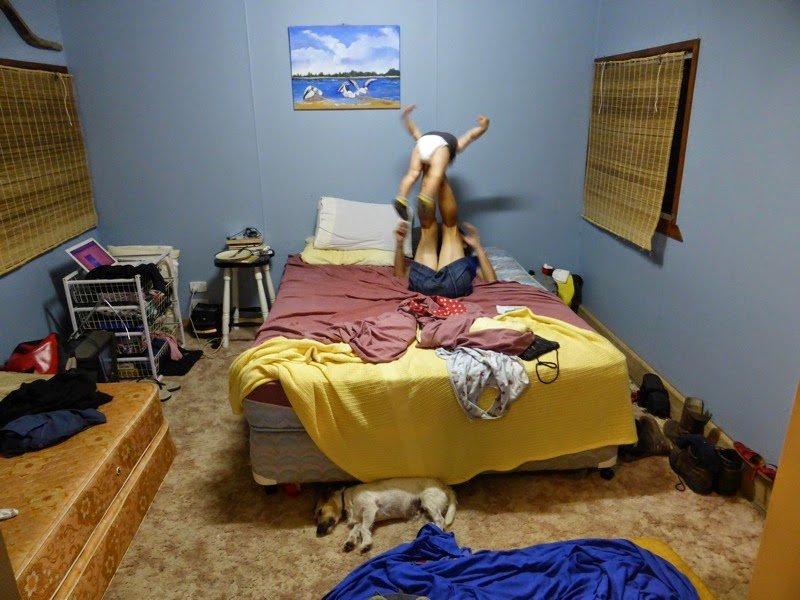 except a particular bike part for a particularly uncommon bike. It was then that we sensed again our significant dependance on industrialised travel: the need for a specific bike part and a car, loaned to us by the lovely Deanne, to head into Lismore to obtain it. While driving there we passed a cycle tourer and were mortified that we were not, for this moment of the trip, part of his community. We discovered in Lismore that our bike problem was bigger than we thought, and we were going to have to wait several days, so we set about looking for some good food to stock up on, 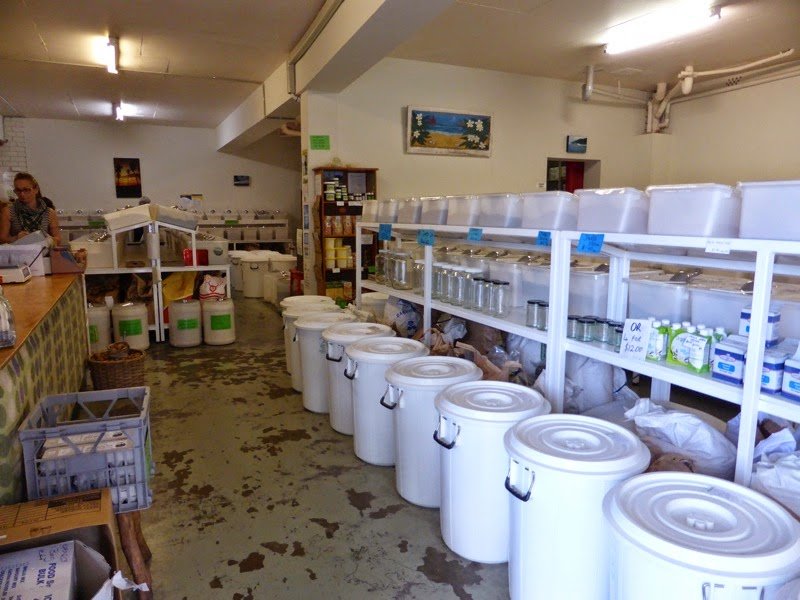 with minimal packaging. Linda kindly offered us the flat until the bike was sorted. These forced stoppages certainly do work for us. We are able to rest now in beautiful Iluka, joining Woody for midday sleeps and taking walks through the Bundjalung rainforest that is home to these incredible public composting toilets, 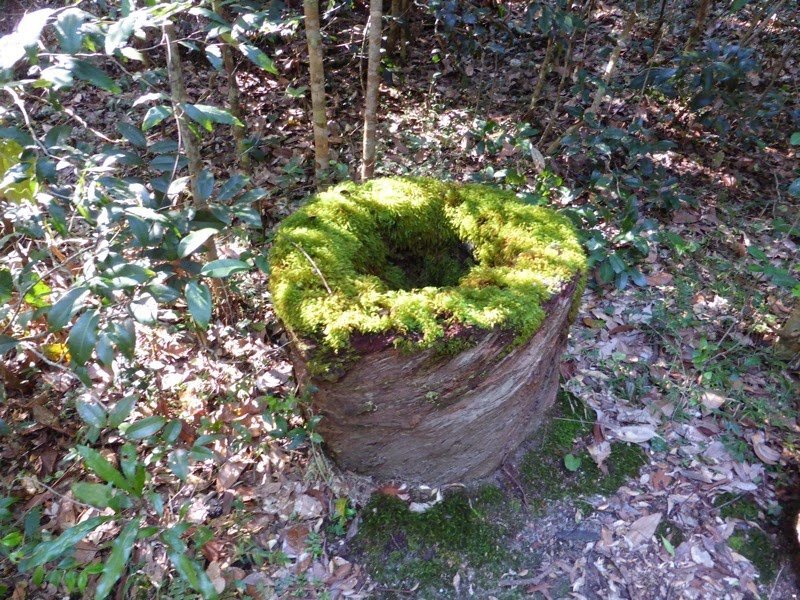 (talk about biomimicry!), and walk across the rocks at low tide at Iluka Bluff in Yaegl country. 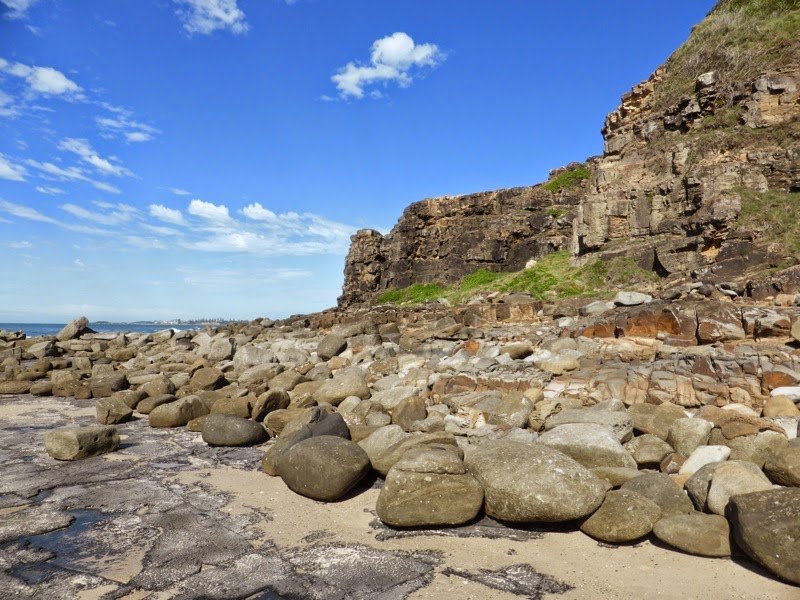 Without these forced stops we have the tendency to keep moving because there is nothing quite like having all that you need attached to your bike and taking off into the unknown again and again. 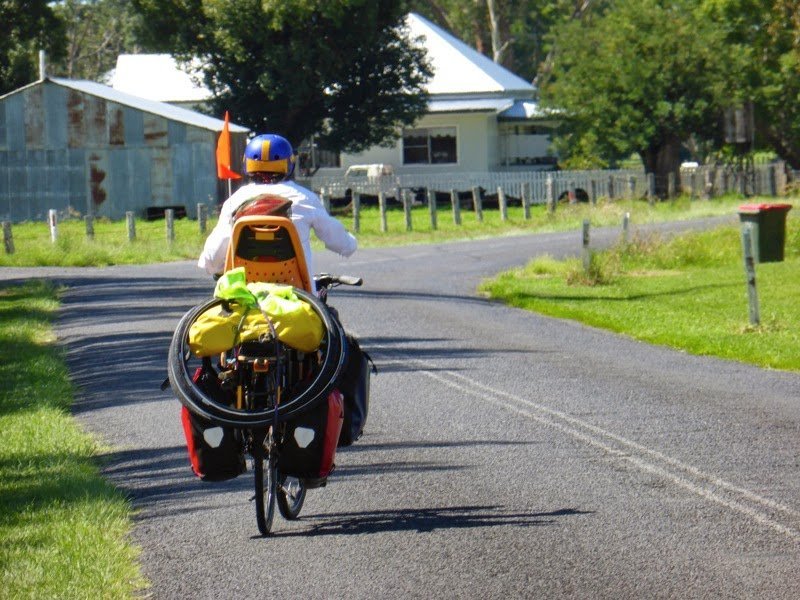 This life is becoming very addictive.