Subscribe
Thank the stars we rested at Jingellic and ate the bounty of local critters the Upper Murray offered, 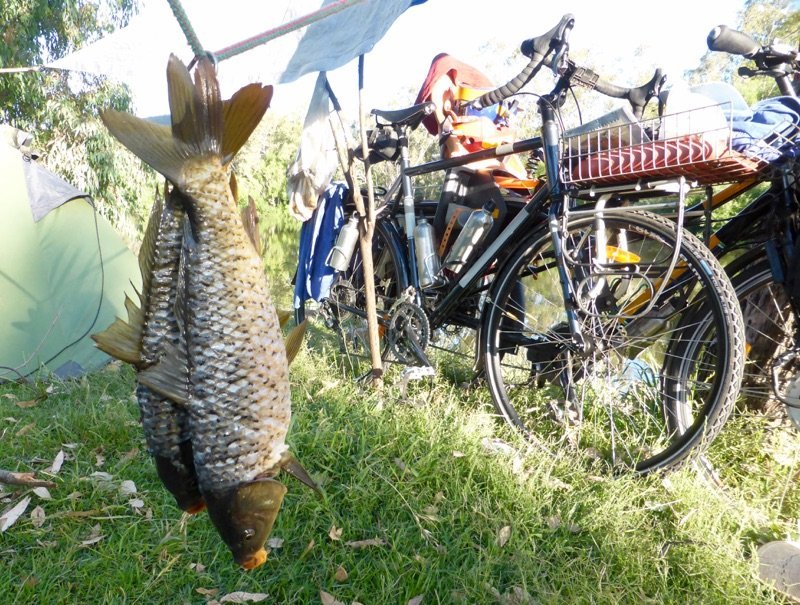 an idle few days cooking carp on walked-for wood coals and playing songs around the campfire prepared us for the 44 km slog all up hill, 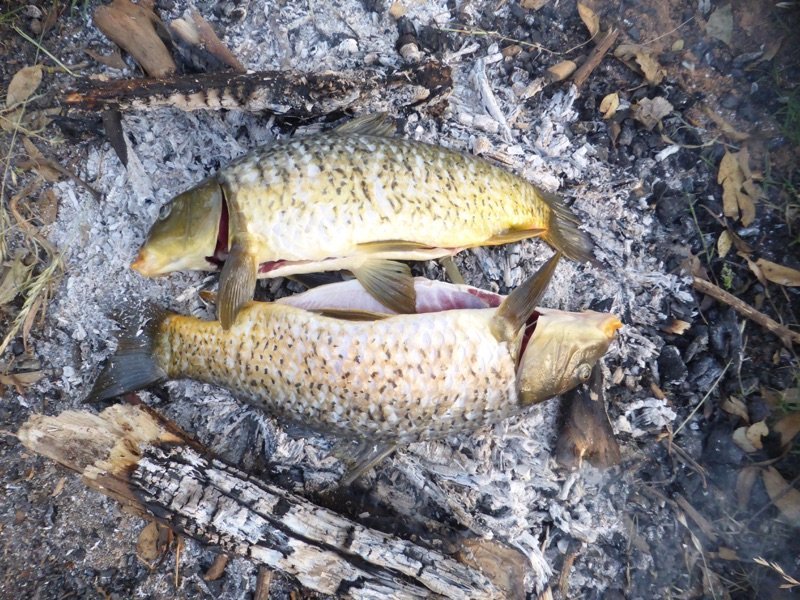 to Tumbarumba. Hello cows! We guerrilla camped for three nights beside the town’s creek, 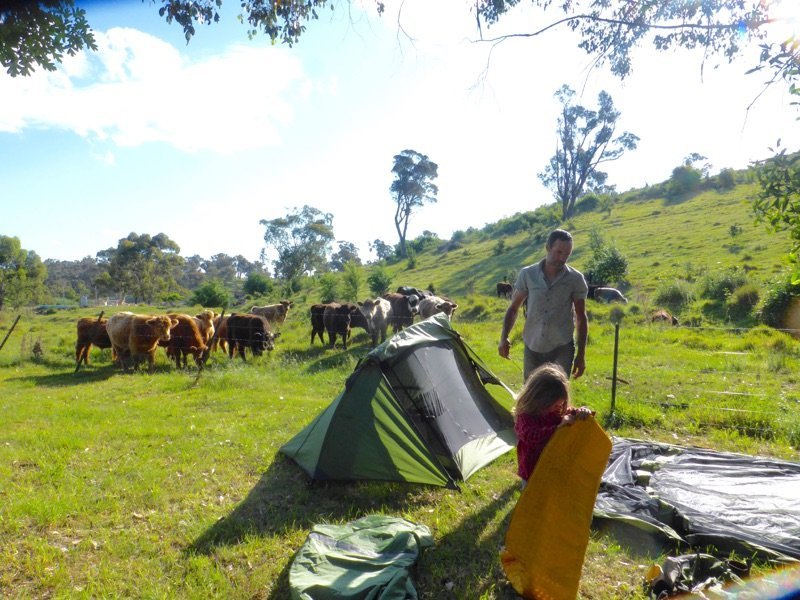 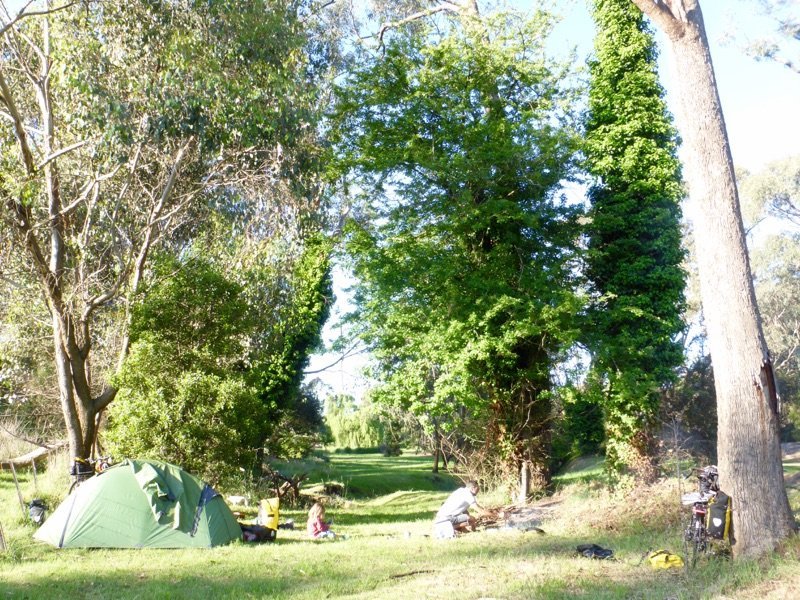 We were invited to dinner at Geoff and Karen’s, who are fourth generation farmers we’d met on the first trip. Respectful debate concerning land use, economies and politics continued from where we’d left off in 2013. Back then Geoff was a climate change skeptic. But no longer. 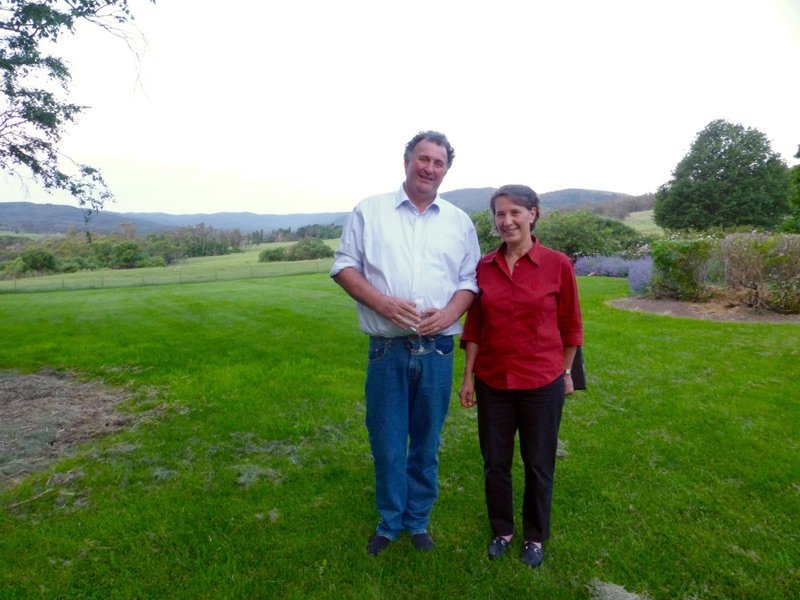 We held a free foraging class, and identified around twenty species of autonomous edibles, 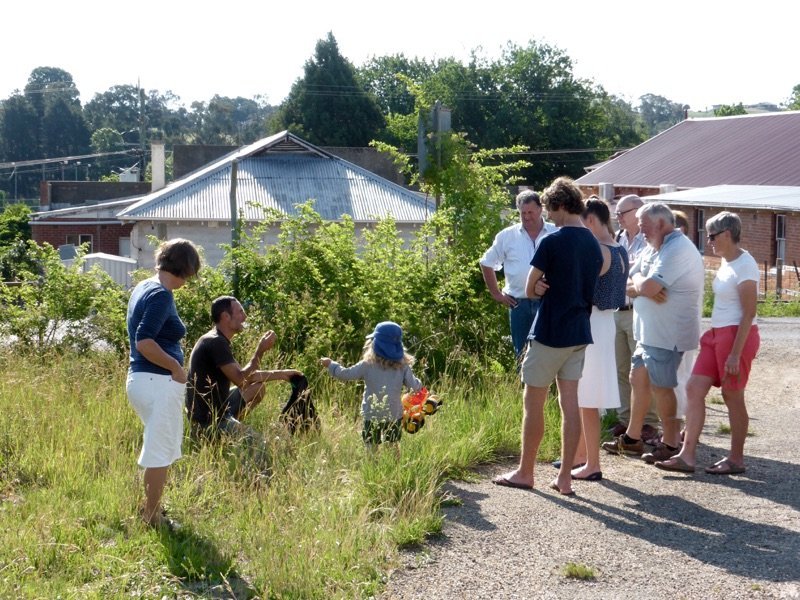 gathered up the best of what we found and demonstrated how to turn these free gems into desirable food. 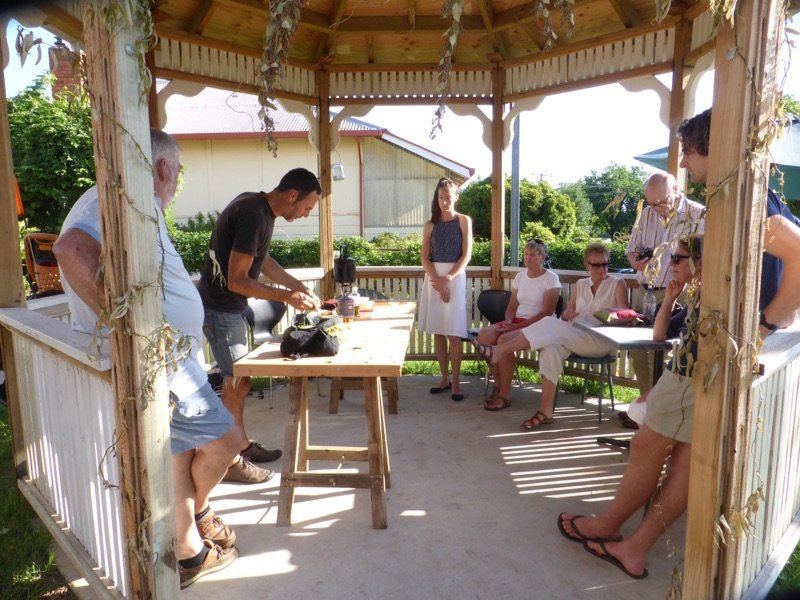 We then gave a reading at Nest, and sold a swag of books. Yippee! 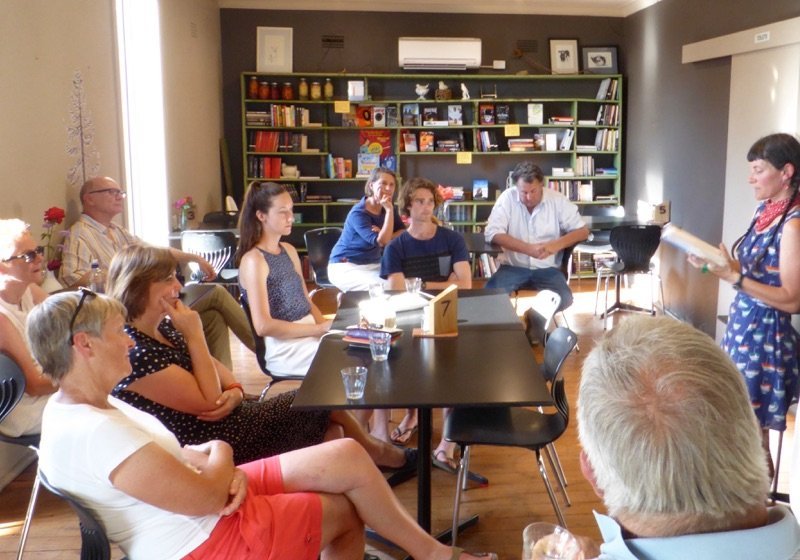 We’d heard the ranger was keen to catch up with us in Tumba, so we hightailed it to Batlow and hung out in the library where we met Robert, the town’s librarian, who went home at lunch time and picked us a bunch of his glorious asparagus. Thanks Robert! 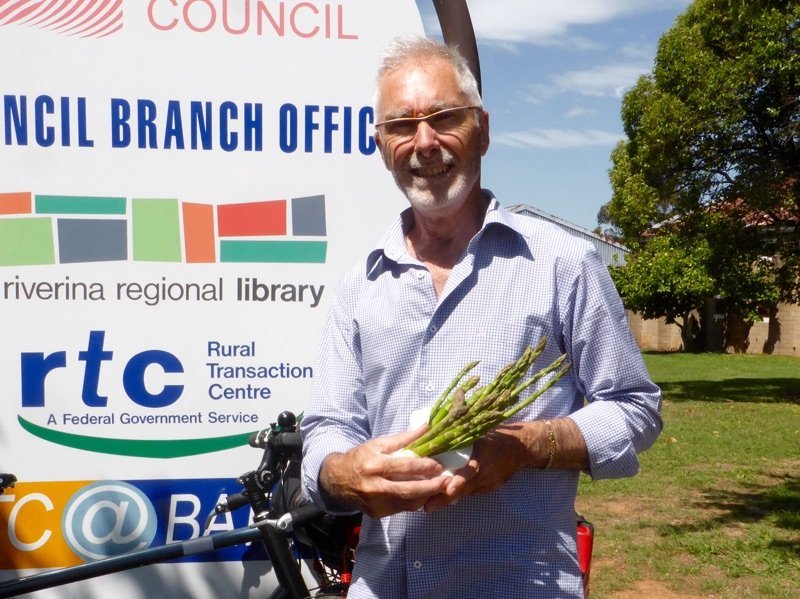 We were offered a free camp at Greg Mouat’s apple orchard with permission to fish out the redfin from his dam. Thanks Greg! 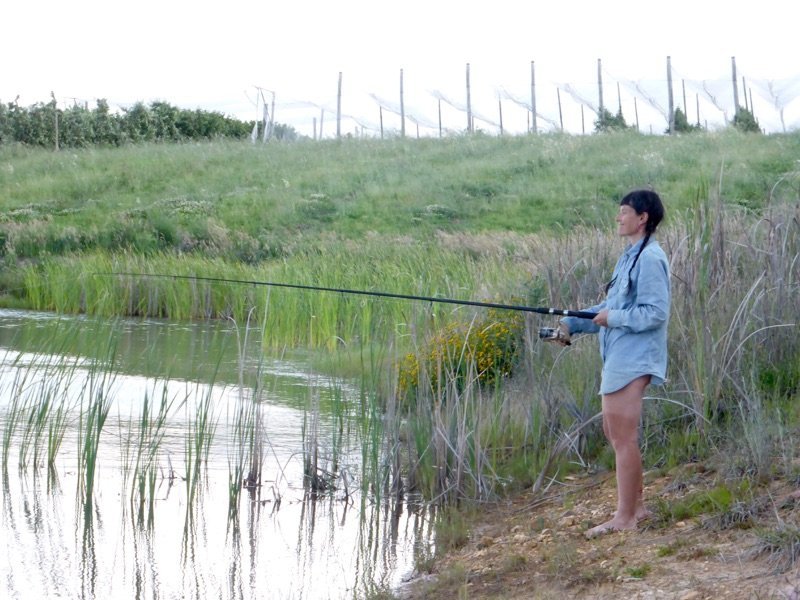 We caught 5 mid-sized ones and added them to Robert’s asparagus for dinner, before bunking down for the night. 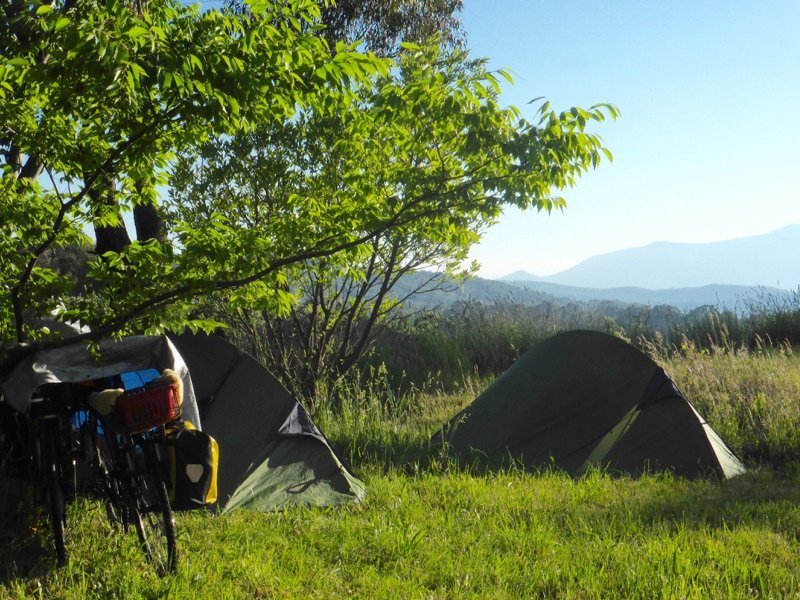 We stopped in Tumut for a little reading at Night Owl Books, 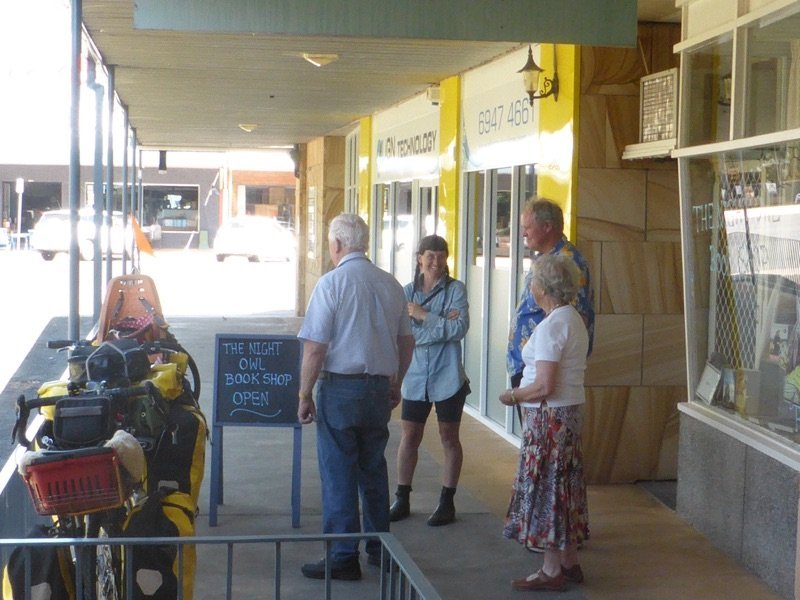 and took off along the Brungle Road to Gundagai where flashes of the old Wiradjuri spirits collided with newcomer glimmer. 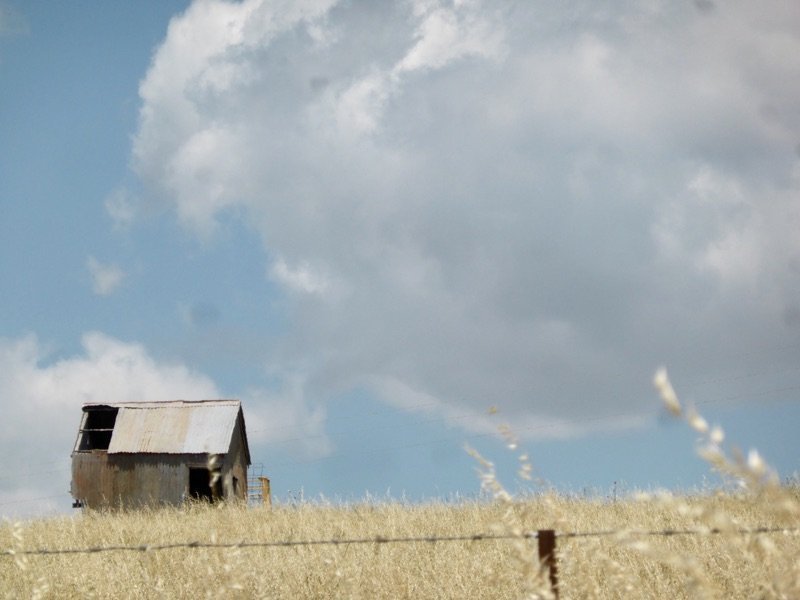 We rode on to Jugiong, made camp again along the Murrumbidgee River where the water was clear enough to go spearing for fish. 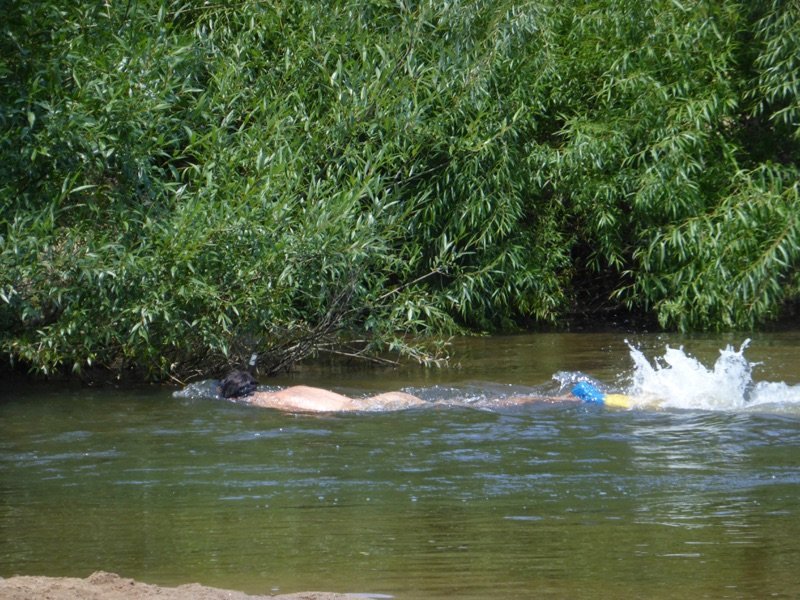 Woody and Zero watched from the pebbly bank, 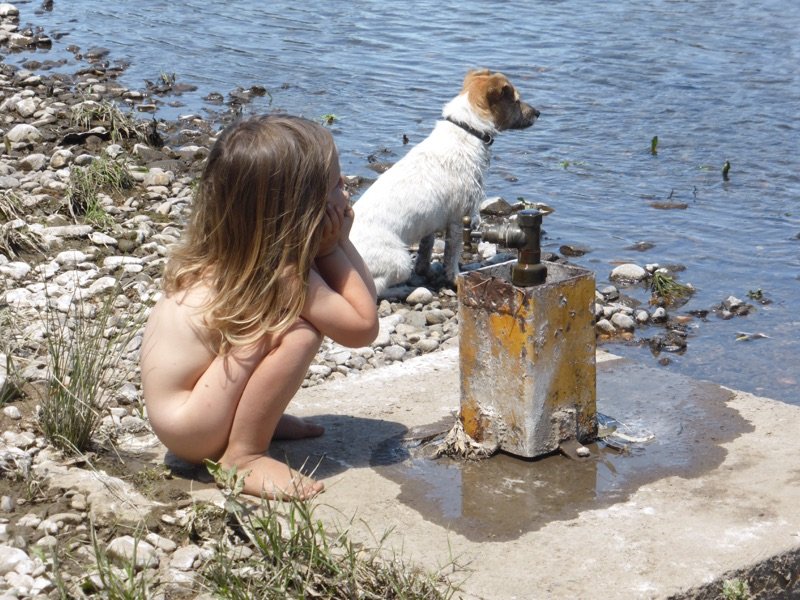 while Meg took a skinny dip. 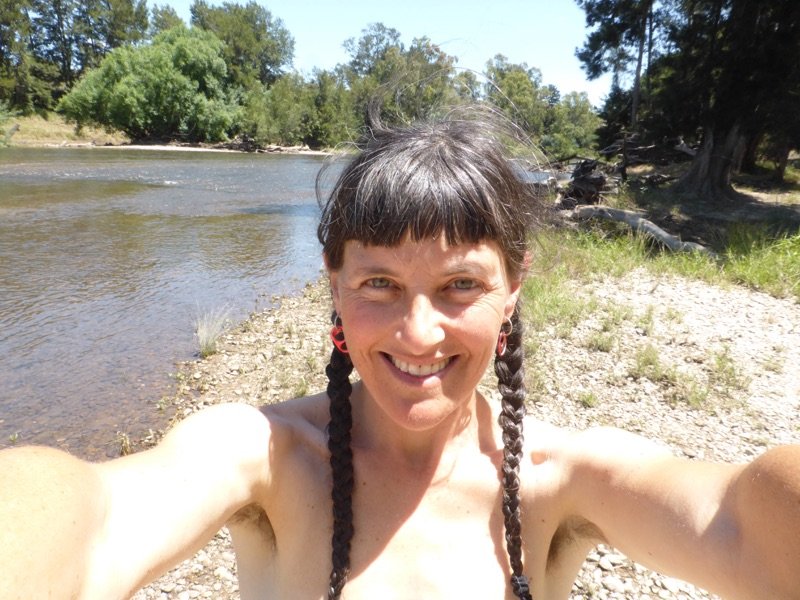 Patrick was unsuccessful catching fish, but we did harvest stinging nettle and cooked up a bag of this rich-in-iron free medicine with pasta, olive oil, salt and lemon. 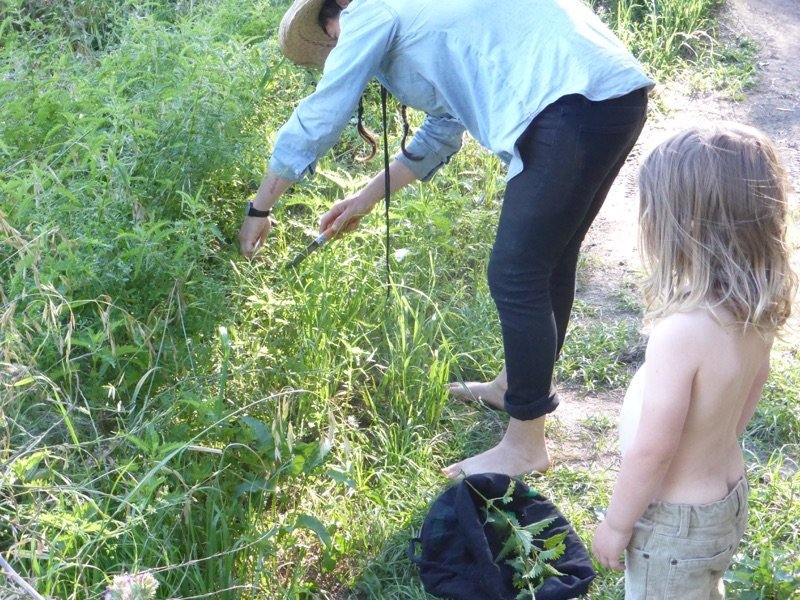 We woke to a billy of porridge and hit the Hume Highway. 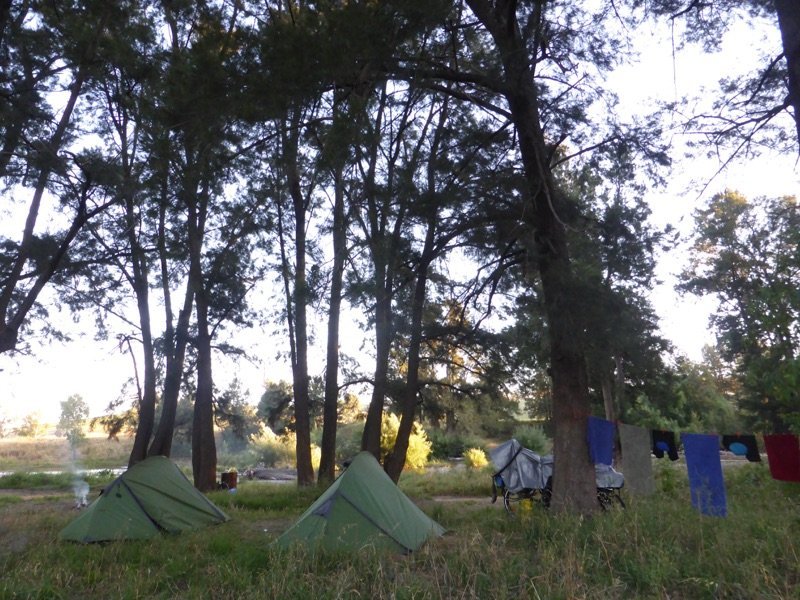 A tedious, roadkill-marred ride brought us to Bookham for a rest, where two years earlier Patrick had pruned this little feral apple tree. He gave it another prune to encourage a habit for greater fruiting in the years to come. Go little tree, grow! 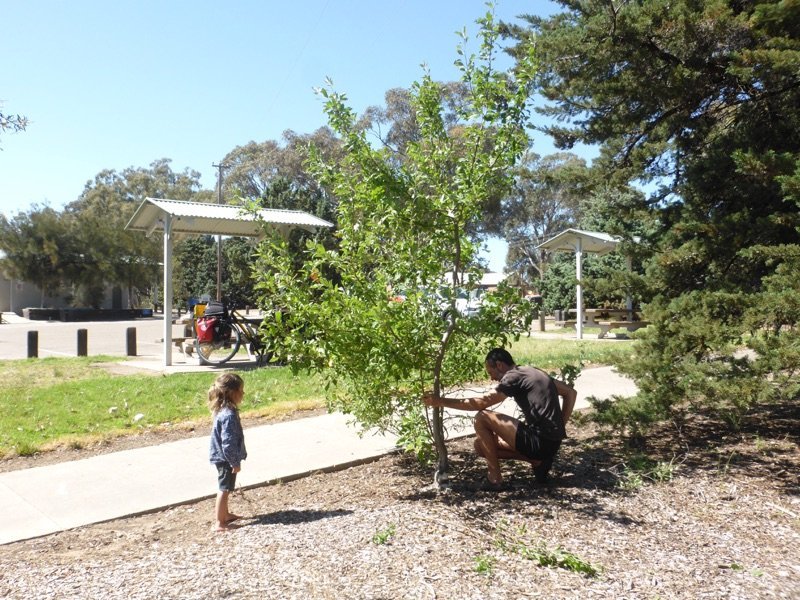 We schlepped into Yass after a deafening and hot 60 kms, pulled up outside the local land council and had a yarn to Brad, a Ngunnawal man. He told us about a local program set up to rid foxes and feral cats who are, he stated, wreaking havoc on the local tortoise population. 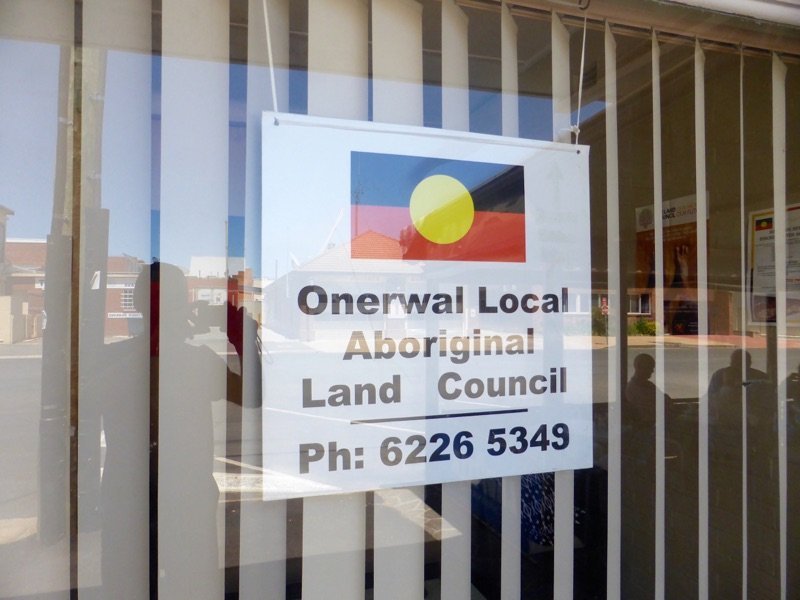 What’s remarkable is how many tortoises we’ve seen killed by cars and trucks since Gundagai. There have been at least 100. 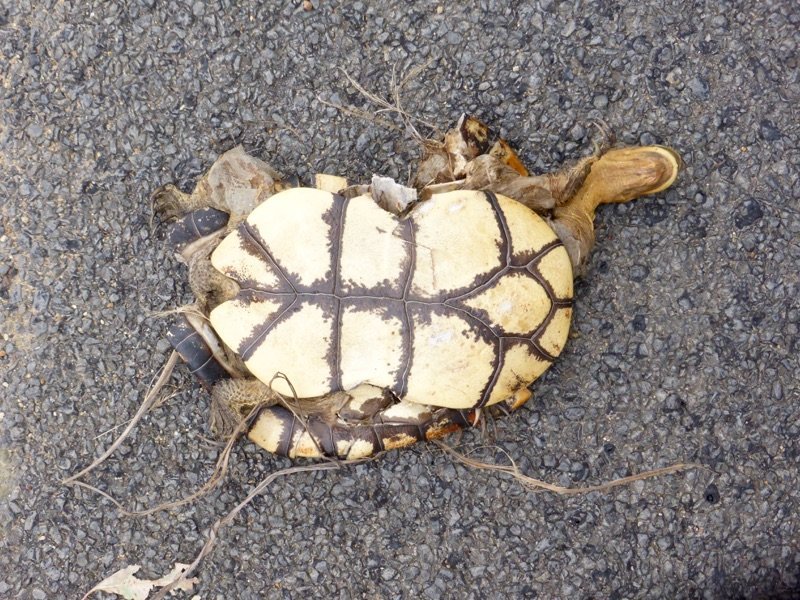 We anthropocenes really are brilliant at kidding ourselves… More lambs; a better environment? 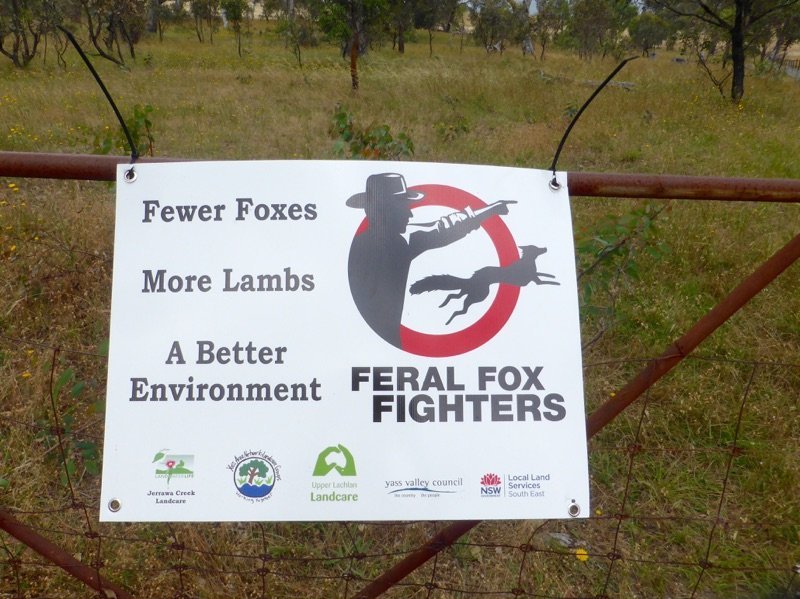 By observing the relationships between other animals —non-mediated earth folk— is it possible to reclaim for ourselves a place as ecological creatures, in relationship and not at war; where one-on-one interspecies killing is part of everyday life, but man-made mass death is not? 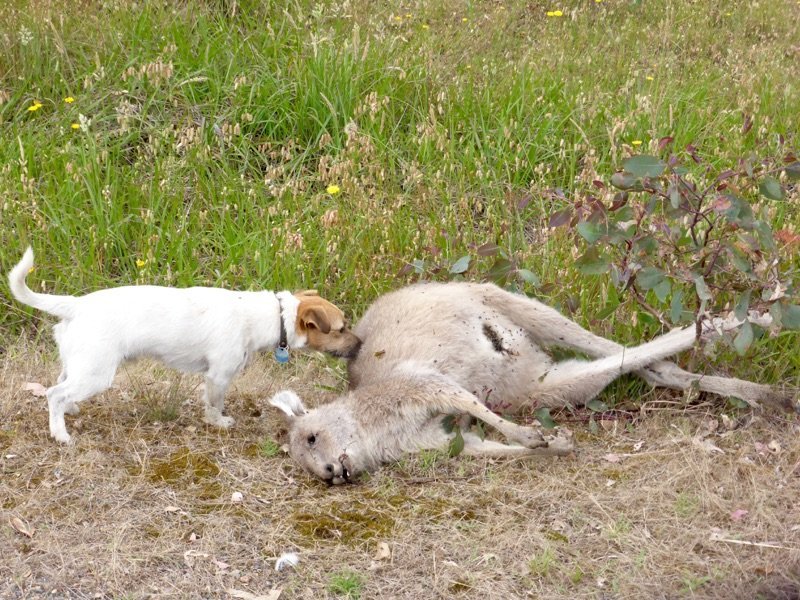 Eating a broad, local diet (such as these dianella buds and flowers, soon to be berries), can perhaps aid a process of becoming post-anthropocene. We believe that if we engage in our own resource gathering we can better be accountable to that which makes life possible. 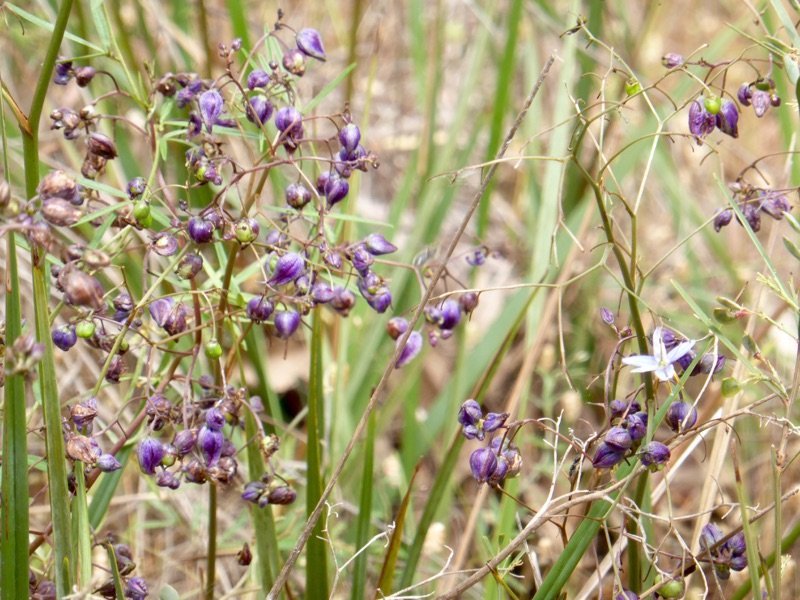 Learning to forage plants that cultivate by themselves, produce food without the need of fossil fuels, mined superphosphate and excessive water inputs all contributes in being able to walk away from the Anthropocene. 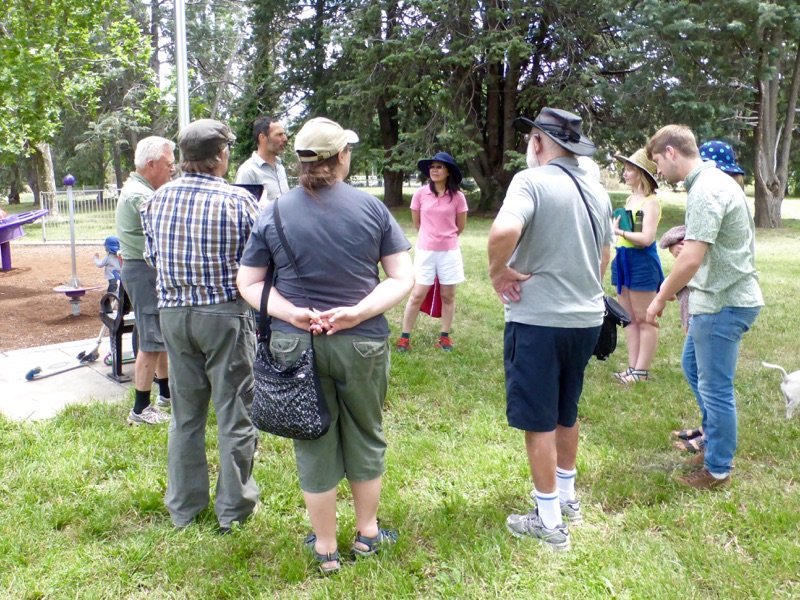 We took this merry bunch of Canberra foragers out for a walk in a suburban park and showed them how much food lies just underneath their feet, before returning to Paperchain Books in Manuka for a talk and reading from The Art of Free Travel. 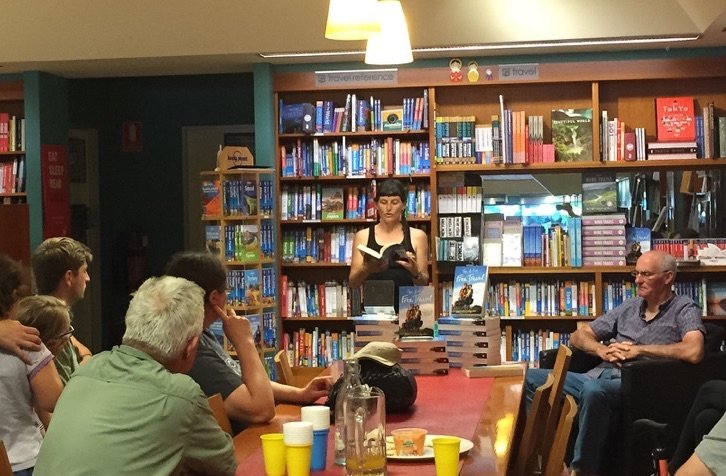 While in Canberra we stayed with an old friend of Patrick’s from undergraduate days. Tim treated us to his excellent cooking and a generosity that made us feel like we were back at home. Thanks Tim! 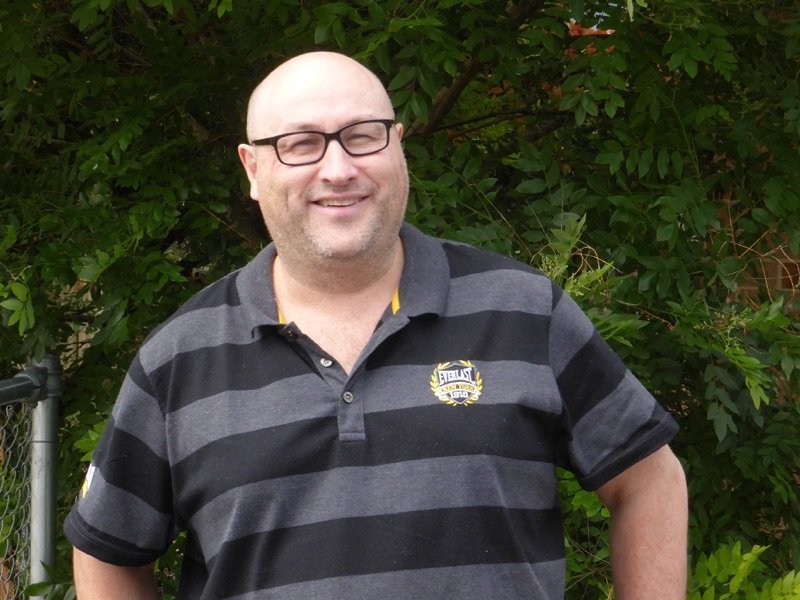 While in the capital we also got to stay with these two kind Warm Showers hosts Kerri-Ann and Michael, who shared their cycling stories and cooked us a lovely meal. 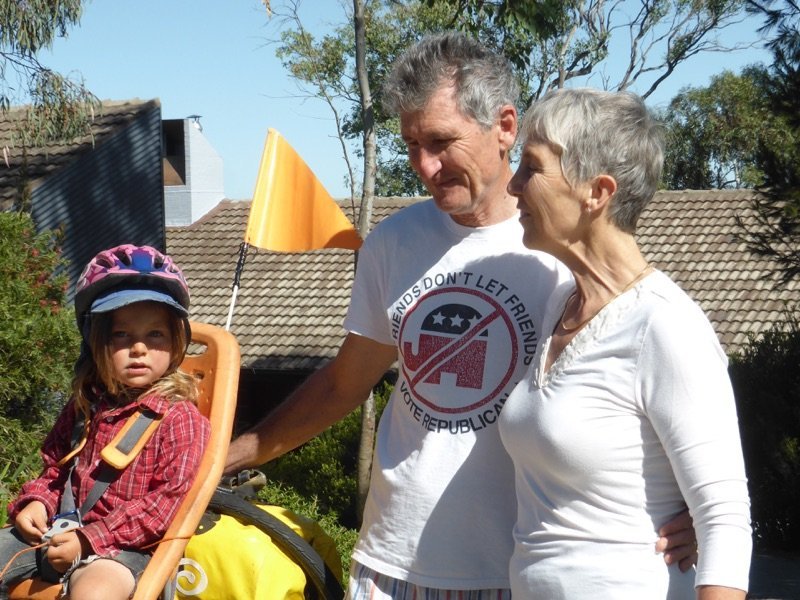 We left Canberra well rested and cared for and rode hard for 70 kms to Tarago to set up an unorthodox camp in their weird but welcoming little public park. 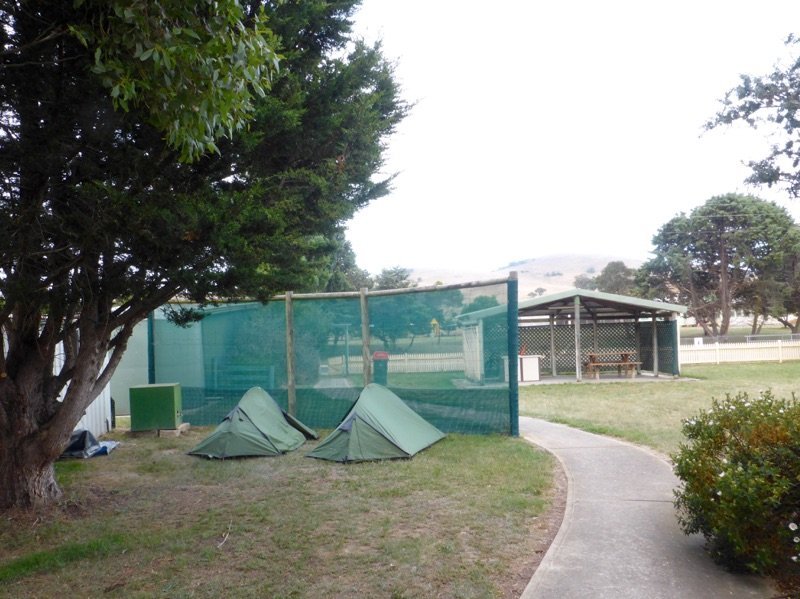 We didn’t linger, leaving early the next day for Goulburn where just before we arrived in this old sheep town we spotted fruiting African boxthorn berries to snack on. 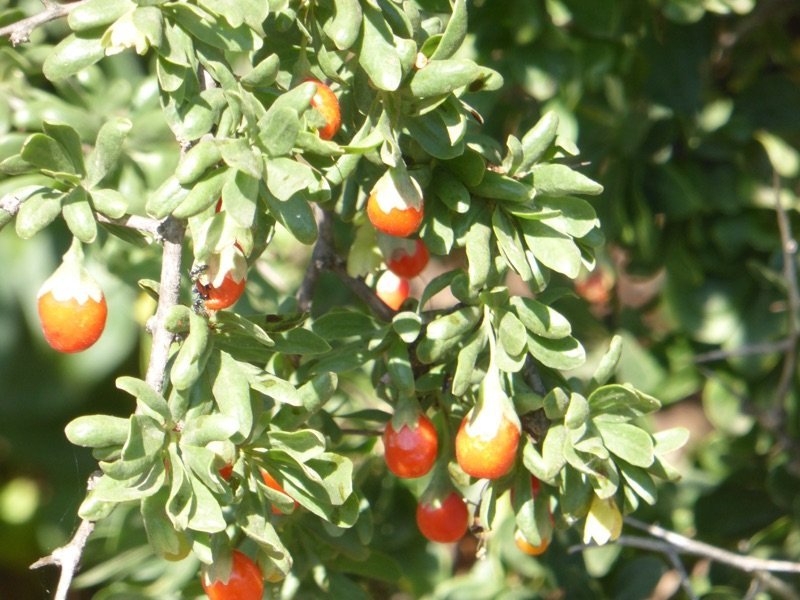 We hope the thorns in your fingers, Dear Reader, provide delicious sweets and free delights. One of the lessons we’ve learned from the road is how the hardships of the day prick the joys, they are one of the same tree.