Subscribe
In July 2007 The Age newspaper published a letter of Patrick’s where he conjured up a little vista into what a fairer, more just society might look like. One that was beginning to repair the damages of an extractive, anti-ecological culture and hold accountable those who knowingly act against life to the detriment of the world’s communities. Malcolm was then environmental minister in the Howard government and we were in the thick of the ten-year drought. 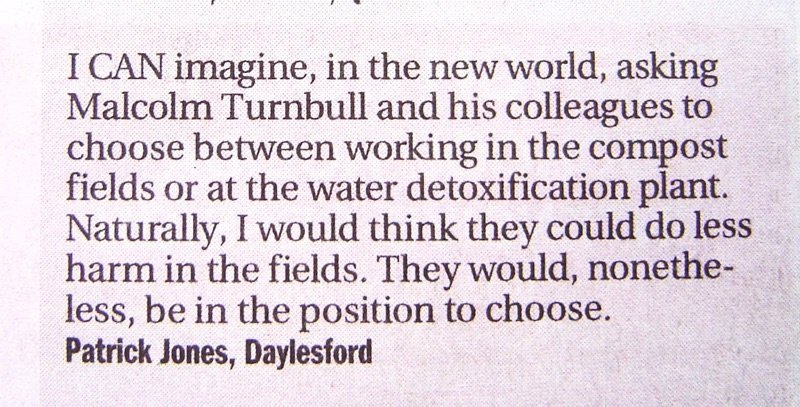 Almost nine years later our household and community economies, based on relationships more than money, are slowly maturing. We have been practicing a low-waste, low-fuel, walked-for food economy with community and friends where gifts play a big part. “I’m just going to drop off the compost to Malcolm and his colleagues, my darling!” yells Meg, as she heads off with Woody. 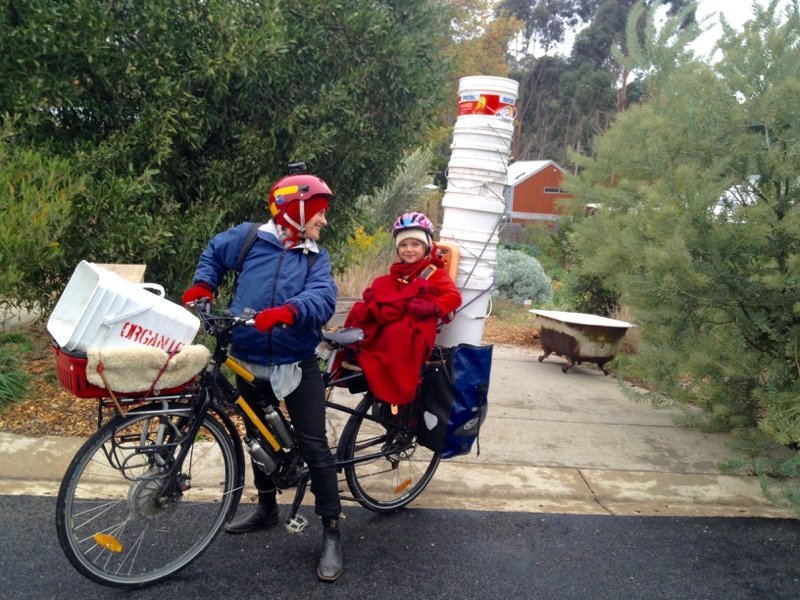 We held a mushroom foraging and identification workshop a week ago, and offered two forms of payment. Cash or working bee. More than half opted for the latter. This is another Meg. She took the work in the garden option and weeded around the veggies. 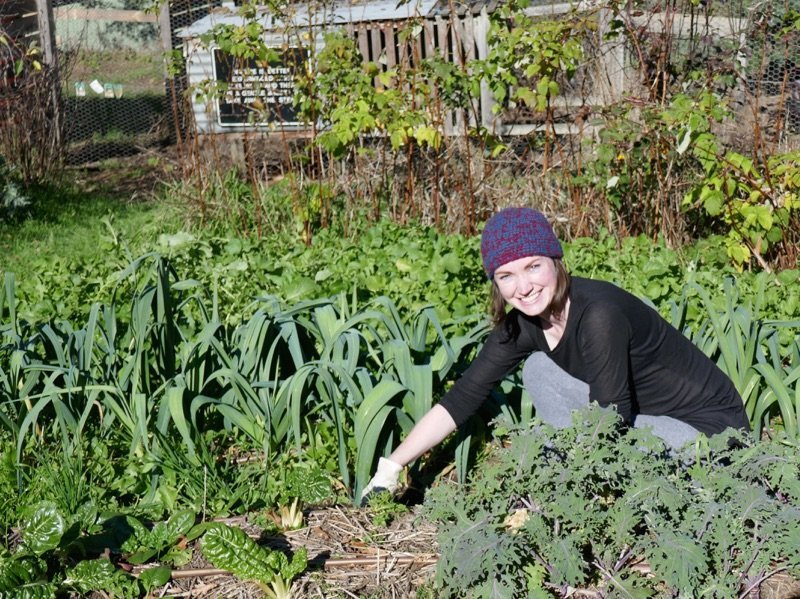 And this is Angela, who helped her. 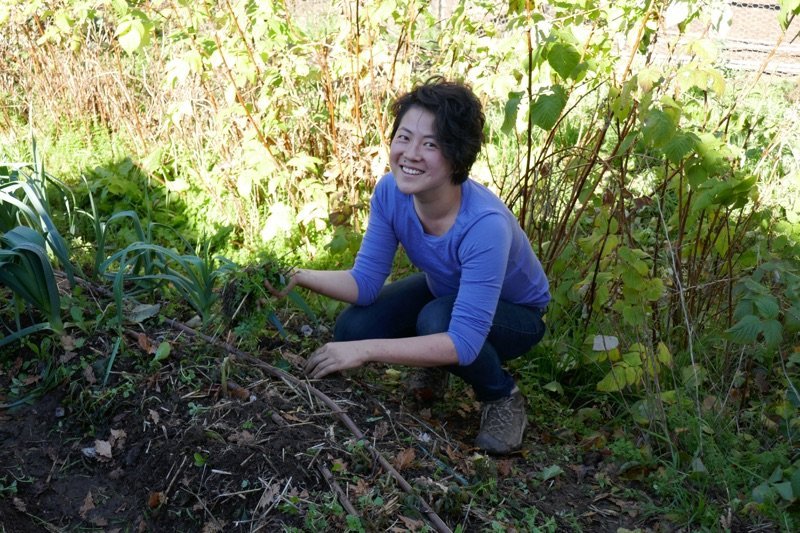 Angelica, our previous SWAP, returned and brought her typical joy, and new pruning skills direct from her urban farming course at CERES. 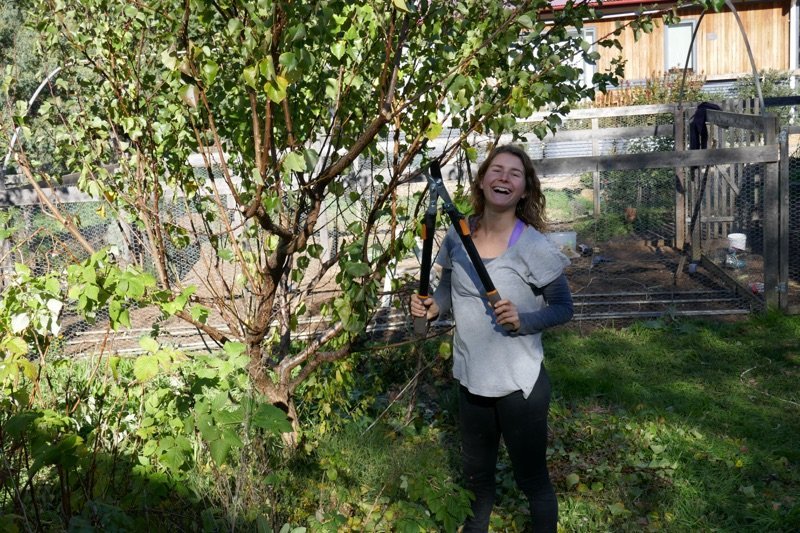 The biodynamic duo, Moe and Chris, worked on a bed overrun by rhyzome-cunning bent grass, 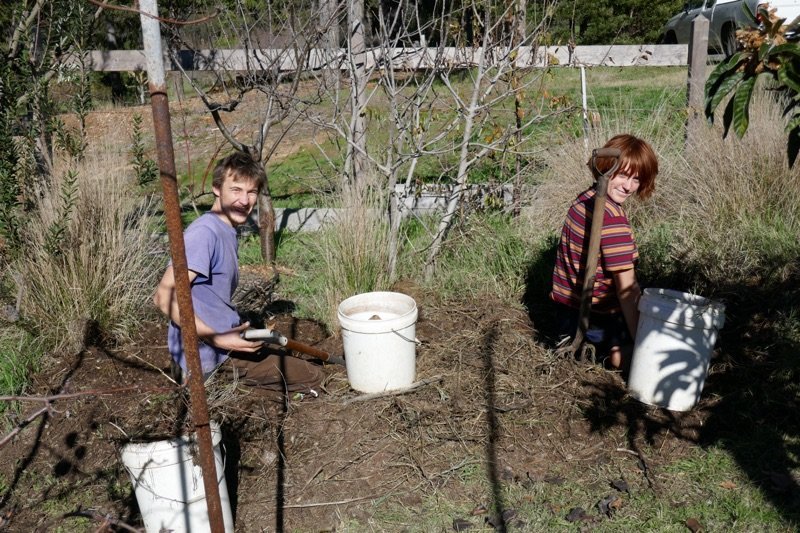 while the helpful, engineer-minded Pearson assisted Patrick in building the almond, quail and bee enclosure. 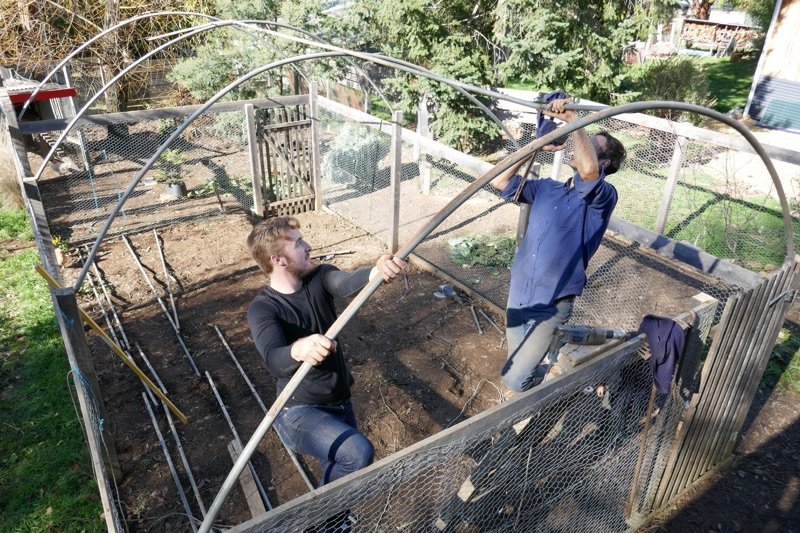 The morning’s productive working bee ended with Meg’s delicious potato and leek soup cooked on a fire outside with a loaf of Patrick’s fresh sourbread to dip in. The shared lunch gave over to the afternoon’s mushroom foraging walk, and despite the 8 days since rain we found several edible species, some dangerous tikes and a whole heap we put into the category of little brown mushroom. 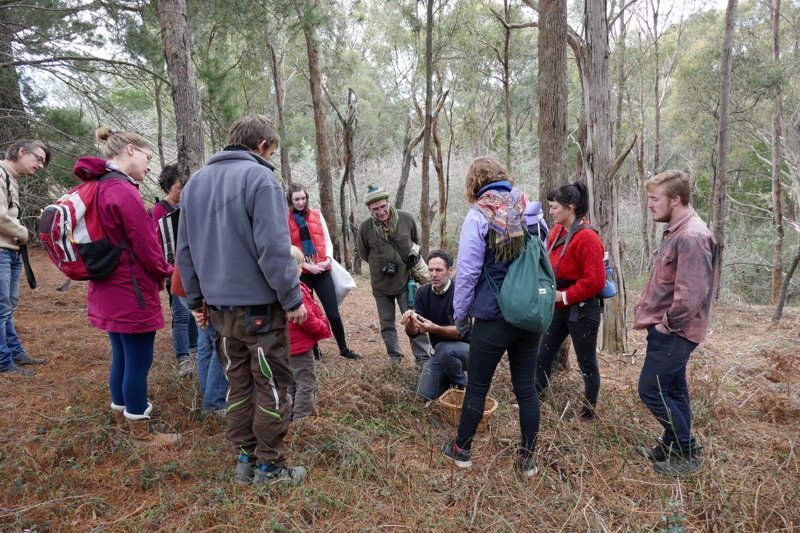 This time of year this is what our dinner hauls look like: 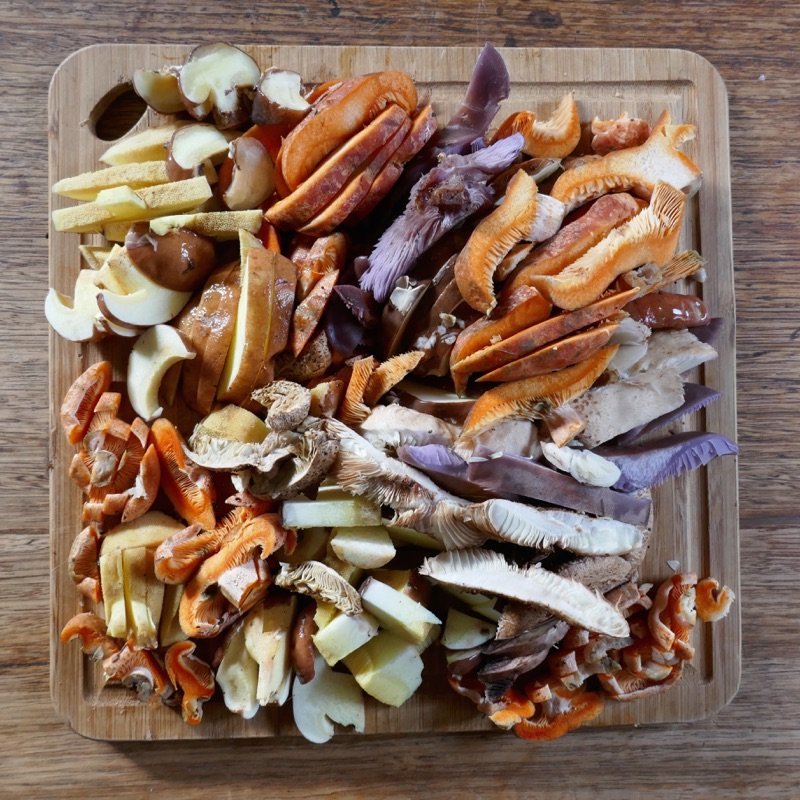 The day after the mushroom walk, Meg put on her teaching cap and shared her passion for fermented drinks with co-conspirator Raia Faith Baster. This second Culture Club event at the Senior Citizens wing of the Daylesford town hall was free, which Meg organised with her HRN cap on. The disseminating of knowledge where all have access to skills and ideas is very much part of performing a fair society. 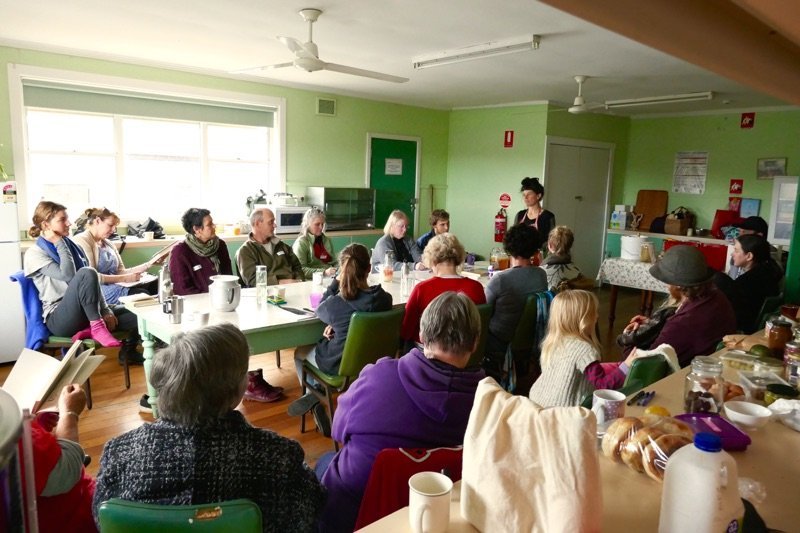 Our most recent SWAP is Letitia, who has been learning from us forest crafts, wholistic land management practices and other performances of regeneration and renewal. Notice the possum dreys above her and below. 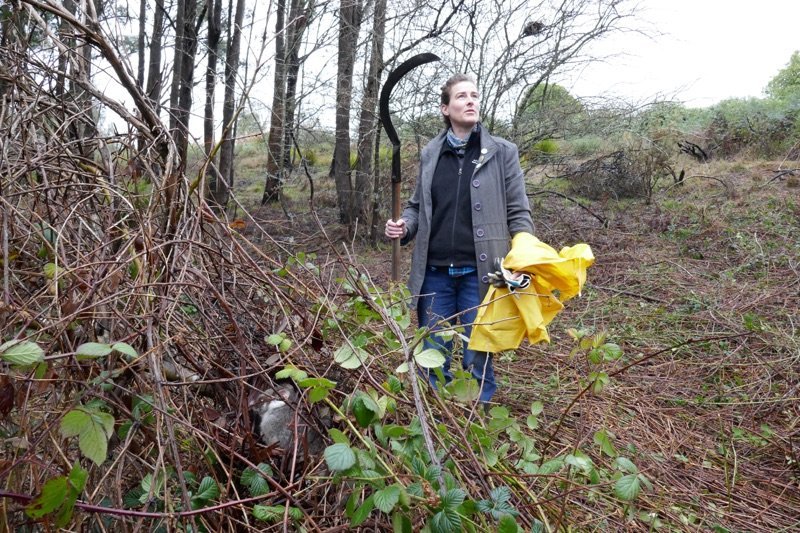 While she was turning 2m high blackberry canes into useful groundcover with a simple tool and her stomping boots Letitia uncovered a ringtail drey in the hawthorn and blackberries. If we don’t do this work the CFA will set a fire to this forest next season and all the possums will be smoked out or killed. Here’s an example of indigenous and newcomer species non-dualism.

We shared lunch and a walk around a nearby sculpture garden with our friend Richard Tipping (whose sign work you can see) and his partner Chris Mansell. 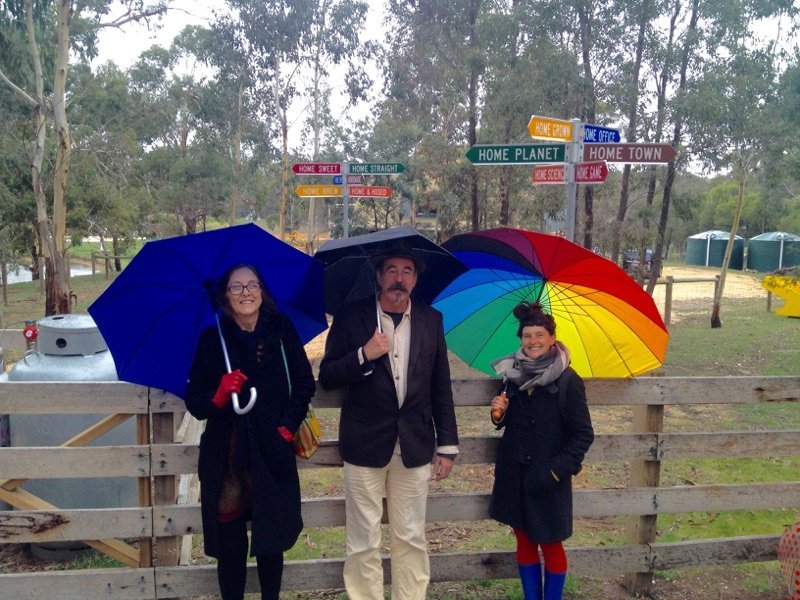 We spent time at the community park in town helping create a new natural playscape area, under the guidance of our friend and low impact building designer, Annabel Mazzotti. 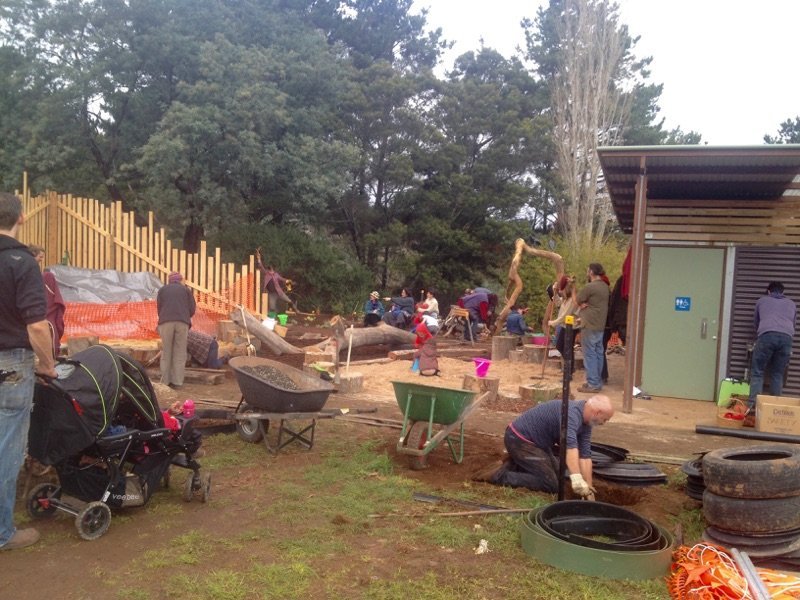 We attended a meeting at our local council to discuss the very real possibility of implementing wholistic and organic land management practices – perhaps a first in Australia. 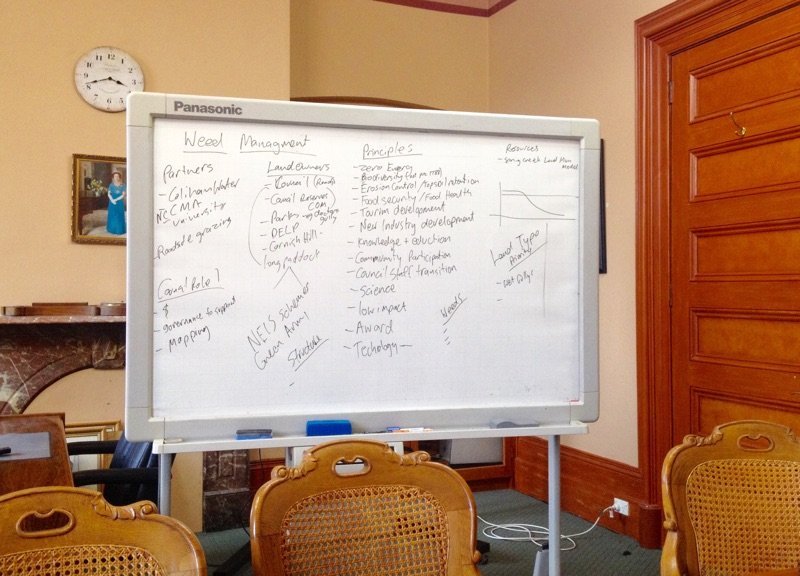 We said farewell to Nina, who SWAPped with us during the Bruce Pascoe fest. Nina is heading back to France after two years of travelling and knowledge building and sharing in Australia. You will be missed, but you’ve hooked us up with Danny. Merci Nina et bonne chance! 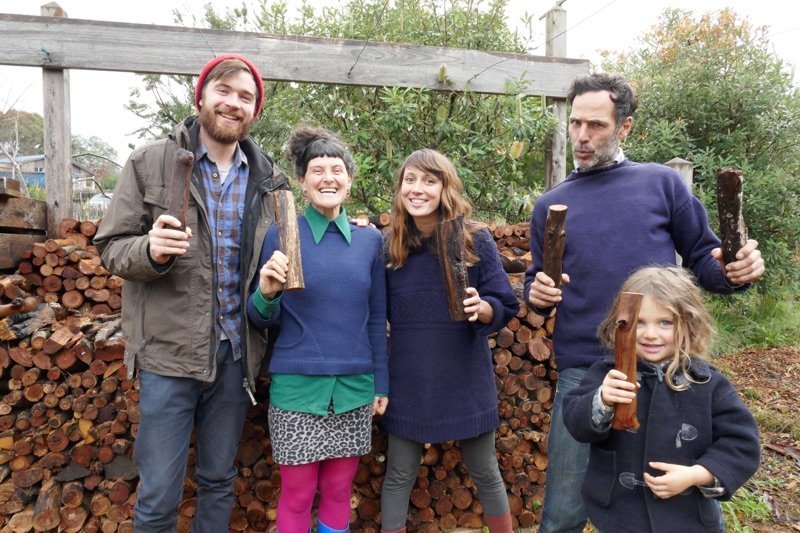 We are about to begin a 6-week building apprenticeship with former SWAP James and Artist as Family’s Zephyr, so we’ve been busy collecting materials from building skip bins and the local tip. 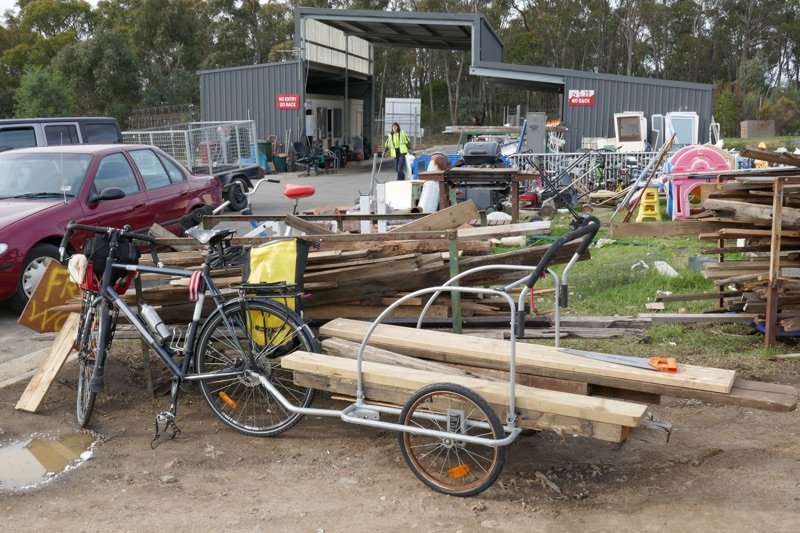 The building that James and Zeph will construct, under Patrick’s tutelage, is called The cumquat, and at the end of their 6-week crash course they should be fairly confident to build their own home. 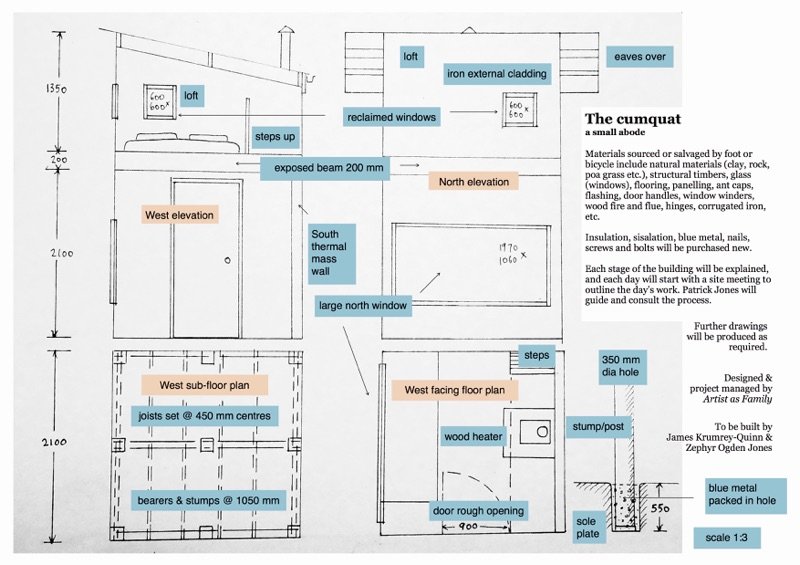 Stay tuned, Dear Reader. We look forward to showing you the development of The cumquat, which will become a dwelling for more non-monetised SWAPping, thus enabling more learning and sharing of the knowledges that are attempting to model a set of responses to the multifarious predicaments of our time.

or in Bill Mollison’s words:

The greatest change we need to make is from consumption to production, even if on a small scale, in our own gardens. If only 10% of us do this, there is enough for everyone. Hence the futility of revolutionaries who have no gardens, who depend on the very system they attack, and who produce words and bullets, not food and shelter.

from Introduction to Permaculture 1991, p177