Subscribe
This year we’ve been running a weekly life-led bush school called Make and Play. We’ve carved spoons, made multi-pronged fishing spears, learned to cook on a camp fire, built cubbies, observed many aspects of the forest, made cord with flax leaves, yabbied and fished, swam, climbed trees, learned to find and share food, and enjoyed stories and good times with one another.
The last Make and Play for the year took place this morning and it was truly magical. After our initial acknowledgement of country and the Dja Dja Wurrung people and elders, and our own old people who have travelled from far and wide, Patrick told the story of how that morning the dawn Kookaburras had told him something strange was happening in the forest today. He asked the kids to keep an eye out for a sign or a clue as to what that strangeness might be. 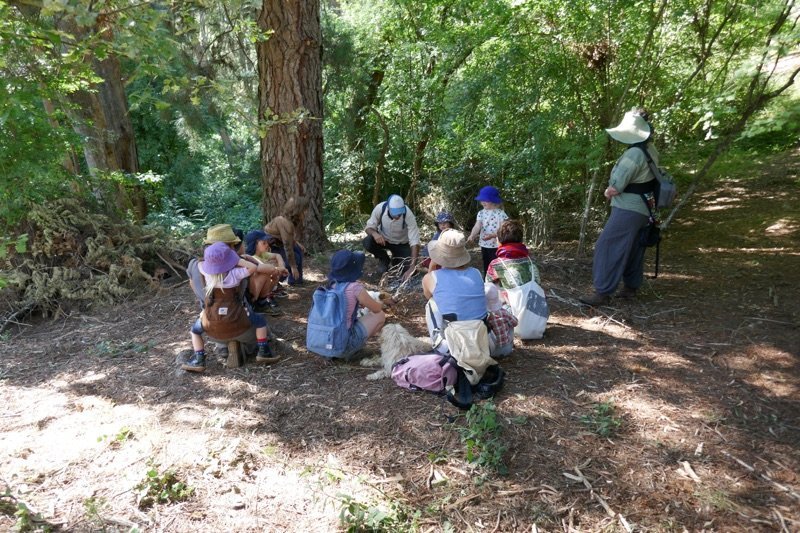 Ashar told us the story of an indigenous group that uses ash from the fire to receive messages. He didn’t know the full story so we decided to experiment with our old camp fire. Patrick buried his hands into some cold char-ash, threw it up, and as it settled on the ground he discovered a letter under the coals. We were all gobsmacked. 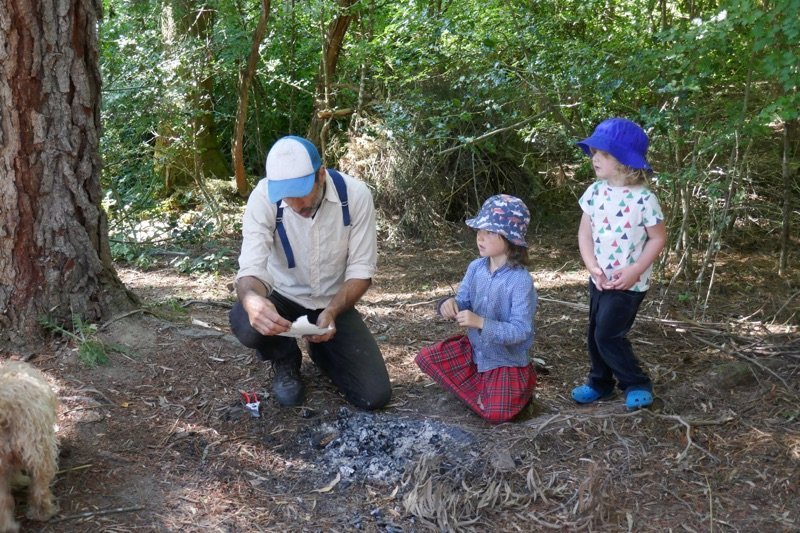 He read it out. 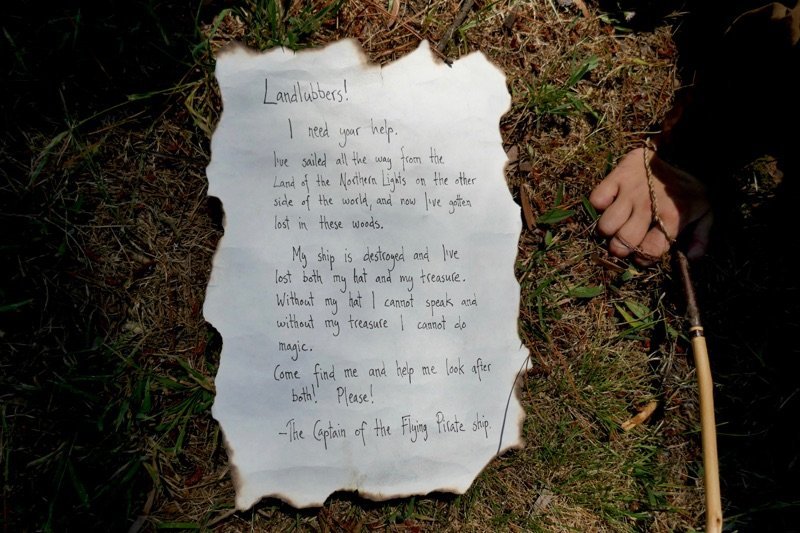 We knew we had to help The Captain of the Flying Pirate Ship, so the first thing to do was to find him. We got Zero, our trusty Jack Russell and his scruffy mate Fluff, to smell the letter and get the pirate’s scent so these two rough coats could lead us to the Captain. We followed the dogs and lo and behold… 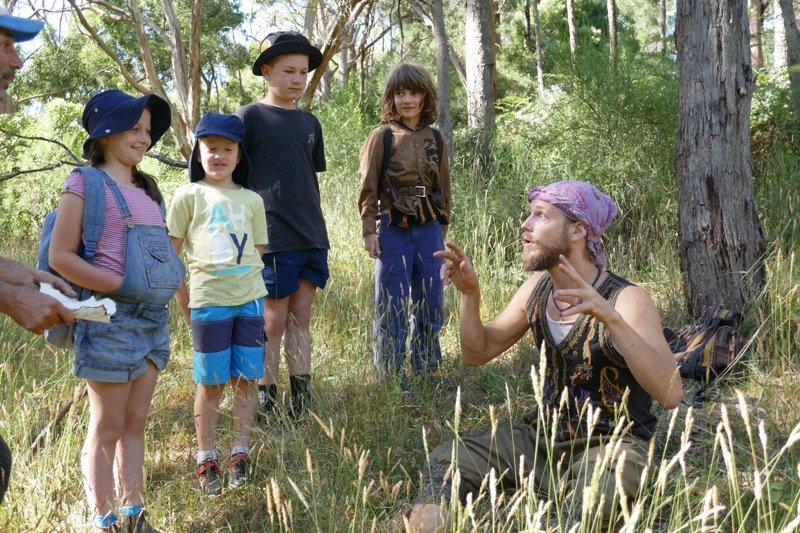 We found the pirate sleeping not far from our cubby camp. Our excitement must have woke him. He was so surprised to see us. The letter mentioned he couldn’t talk unless he had his hat on, so we set out with the friendly mute pirate to try to find it. 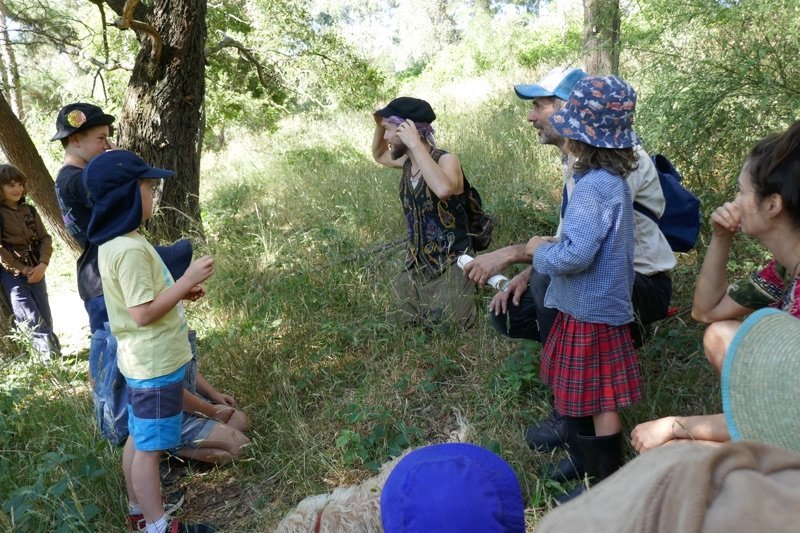 The hat we soon found at the Can Tree, he put it on and – it was a miracle – he could speak! But it was a foreign language he spoke. We had to use our best expressions to tell him we don’t speak his language. He quickly understood and spoke a language we could understand. He was so happy we could understand him and that we were eager to help. 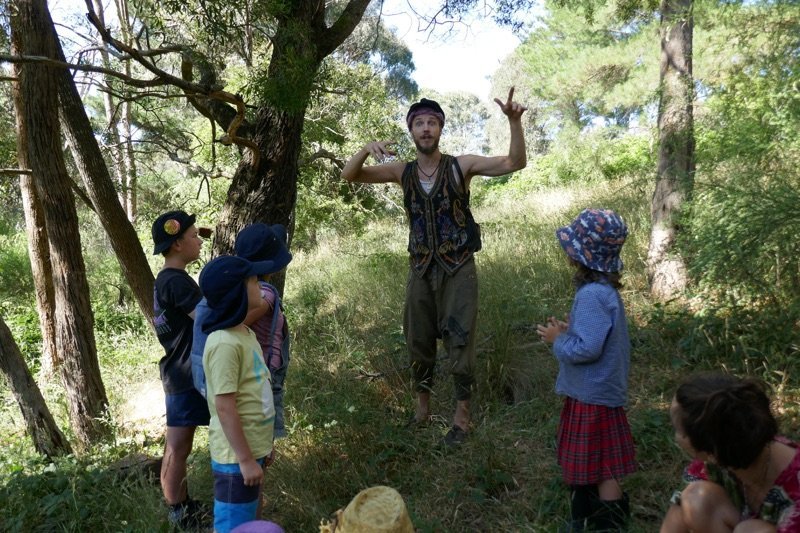 He told us that his flying pirate ship had crash landed and his things were scattered all around. He was especially hoping to find his beloved stringed instrument which he had on him when he crashed. He lost it right after he’d heard the magical sounds. Therefore we wondered whether we would find his guitar at the magical musical sound machine (an old mineral water check point pipe) that goes deep down into the ground, and where we’ve often stopped and listened for the music of the underworld. It was here we found his guitar. 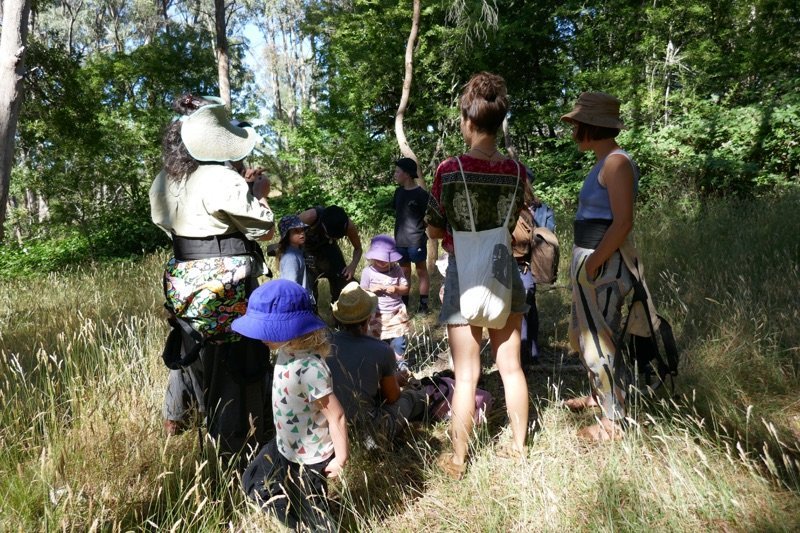 The pirate captain, who calls himself Norseman, asked whether there was a magical fairy tree close by. He remembered learning a song from the fairies back home, so he thought that maybe the fairies here would be able to understand the song. Some of the children knew about the fairy tree and led us to it. Our pirate sang the fairy song, and asked us to join in. Towards the end of the song Patrick saw Zero looking intensely inside the fairy tree and said to the little dog “what is it?” Zero raced straight inside the hollow and uncovered a beautiful coin bag. The pirate said that with this was his bag of magical coins and he could now do magic. He showed us how he could bite a coin in half and then blew it back to full size again. We all watched on in amazement. But how did he do it? 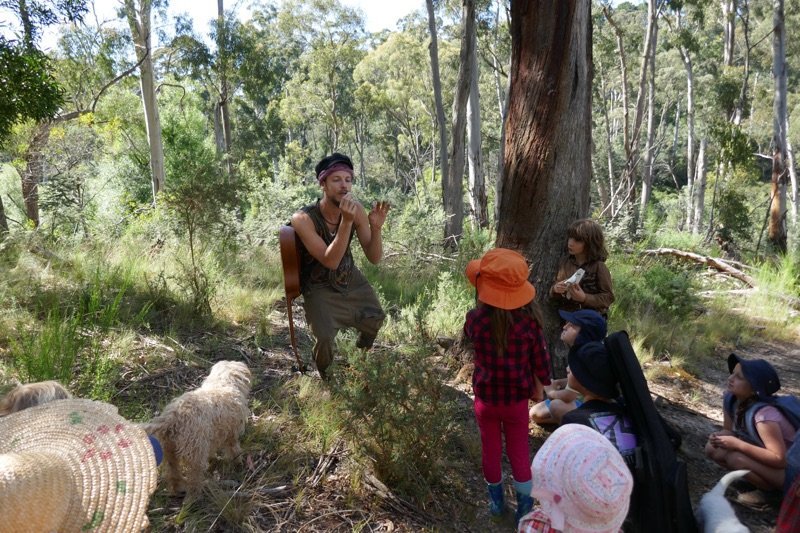 Just at this time a mother fox was seen watching us from just a few meters away. The two dogs got scent and off they went on a chase. We knew the dogs would catch up with us. The pirate was keen to go looking for his tucker bag and find his treasure box. And so were we, so we all headed off to help him. The tucker bag was resting by the mineral water pumps at Sutton Spring, and we stopped for some of this delicious underworld water, and the pirate shared some of his fruit leathers, dried nuts and seeds. Yummo. 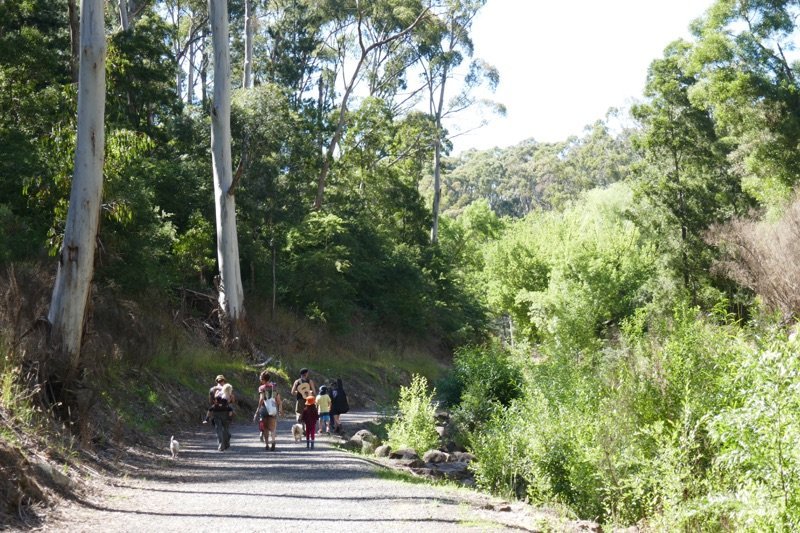 We headed off again, this time we had the treasure chest in our minds. Keeping up with the older kids was quite a challenge. 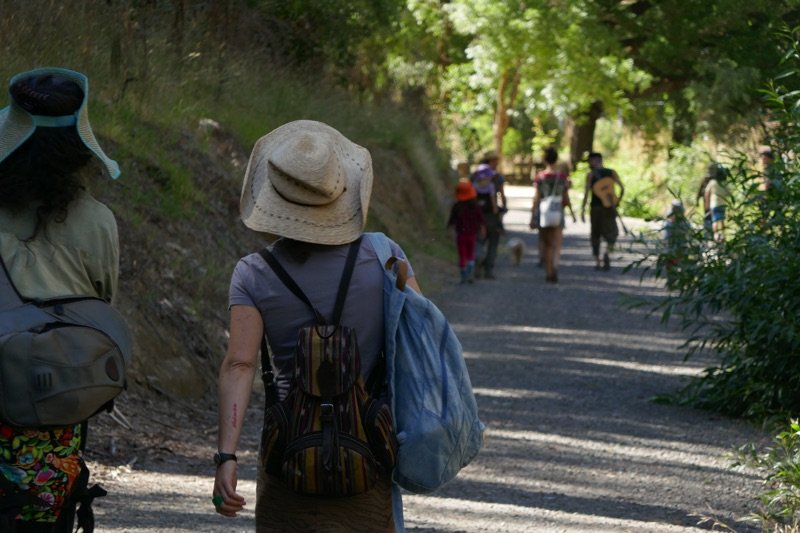 We arrived at Lake Daylesford where our Norseman remembered his ship crashing into. He also remembered holding on to his treasure chest while swimming ashore, but remembered little else after that. We all got very excited that we were possibly close to recovering the chest. The pirate showed us a stick riddle. It’s answer, he said, would tell us the direction to go. 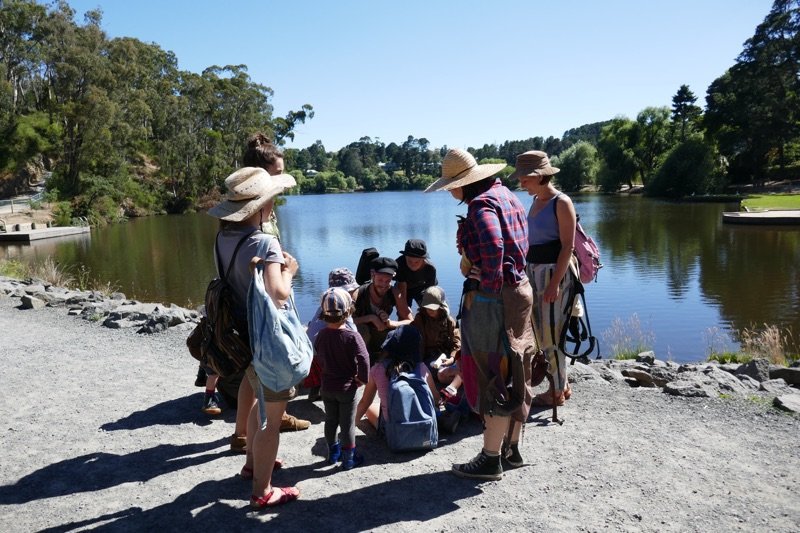 The riddle revealed a fish, and the fish pointed as an arrow, and off we raced in the arrow’s direction. 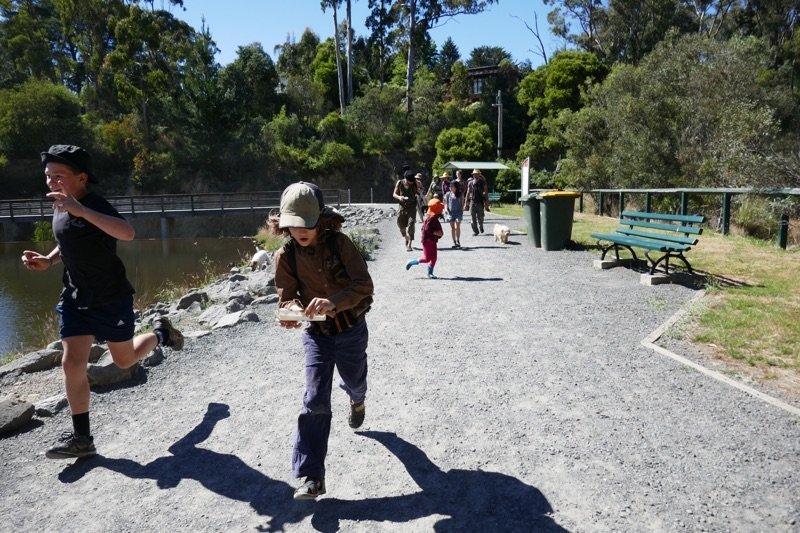 We knew we were getting warmer. 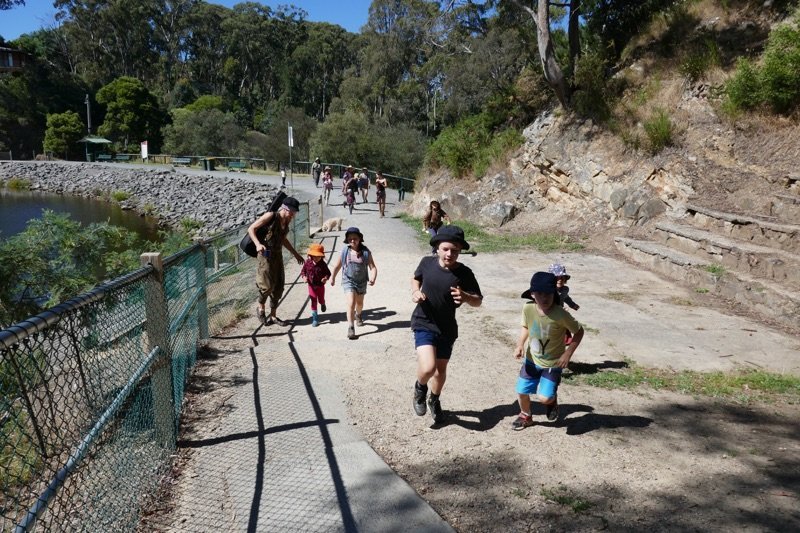 Two turtles and three ducks on the water all turned their heads as we approached and we knew this was a directional sign. We followed their pointer. A small bag with a key in it was soon found and we were jumping with excitement. 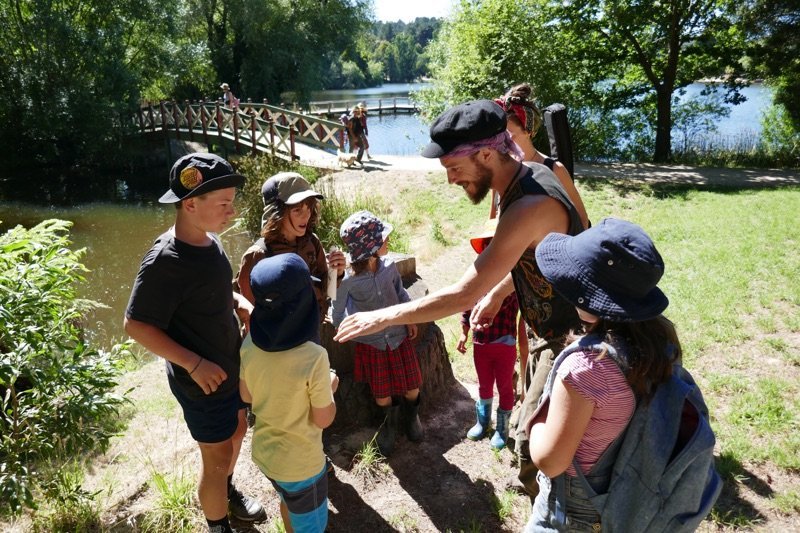 And then young Axel (or was it his older brother Oscar?) found it. The pirate was so happy because it meant he could perform the old magic he’d learned from shamans from all over the world. 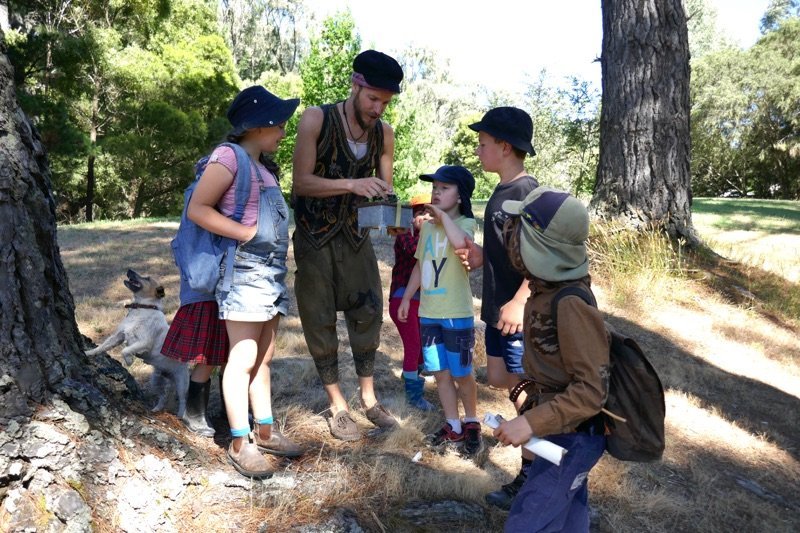 He turned a blank book into a book of colourful drawings by just rubbing over the cover, 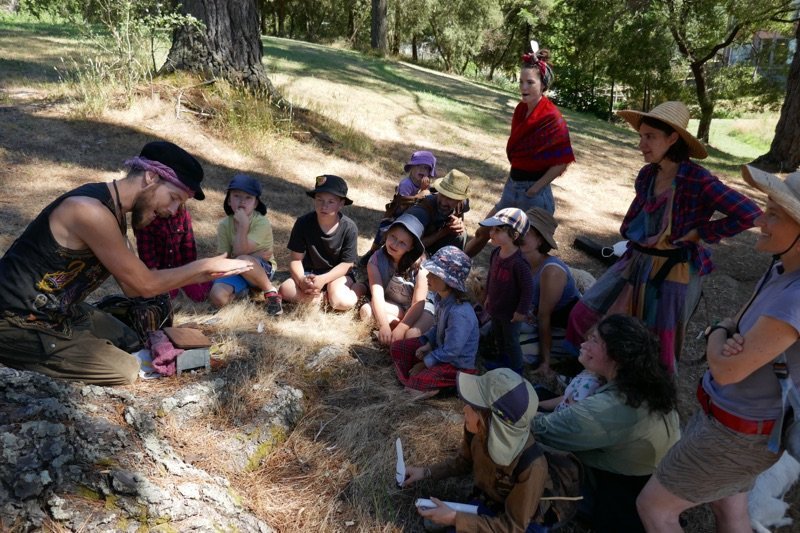 stuck four separate pieces of coloured cloth into his closed hand and when he pulled them out they were all stitched together. 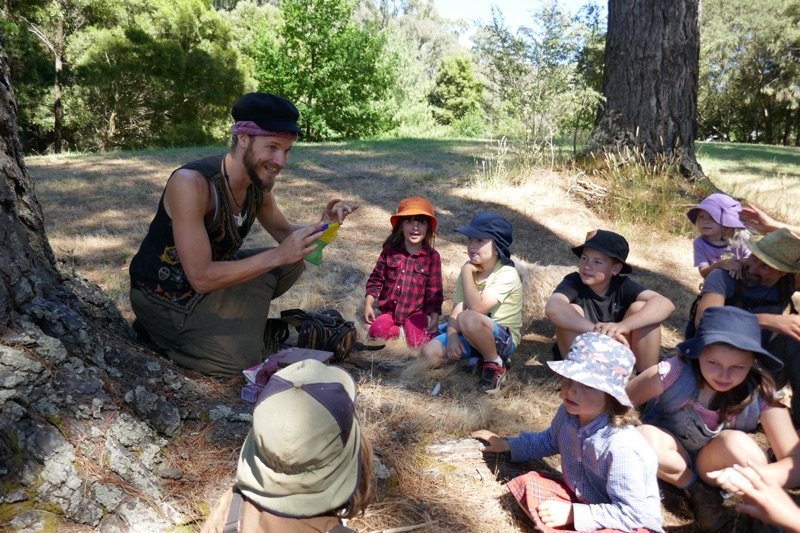 The children were dazzled. How did he do it? 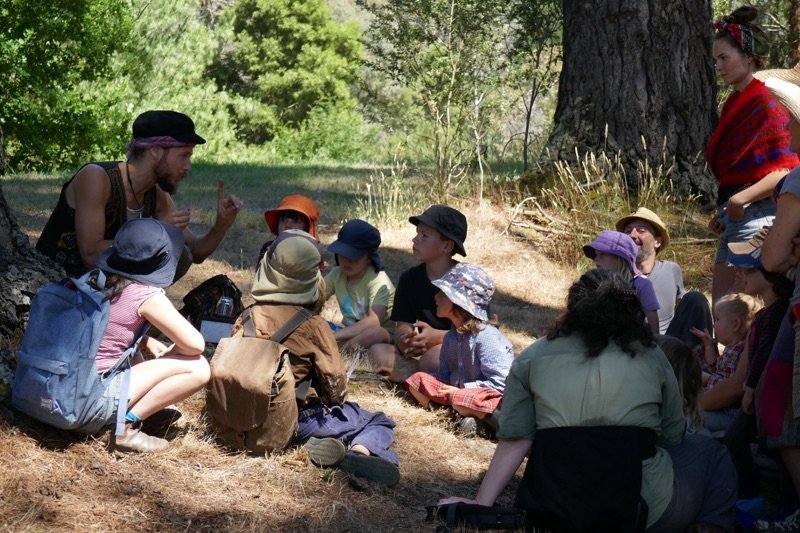 He was so grateful we helped him to find his lost things, and we were so grateful for the adventure he took us on. He took a bow and thanked us for our generosity as we bestowed gifts upon him. 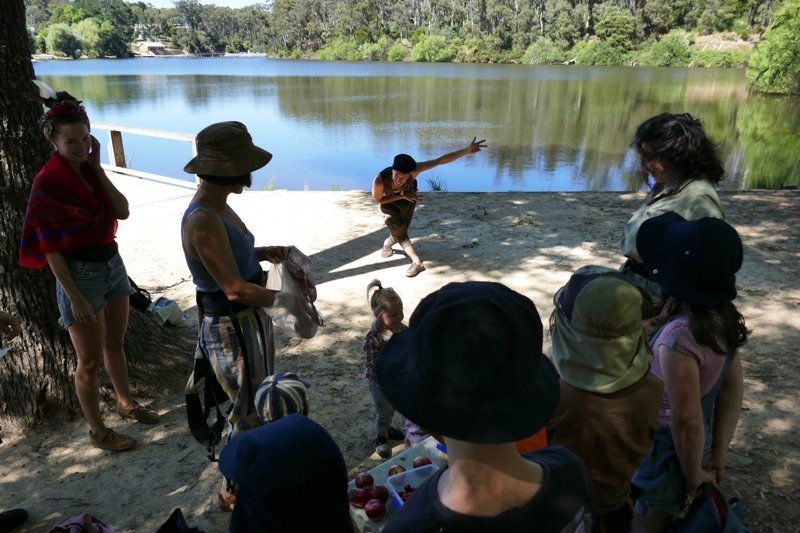 We then feasted on nourishing fruits and fibres of the earth. We have honoured the earth back in many ways this year, one example of this is having our snack food nude, and not in disposable plastic. 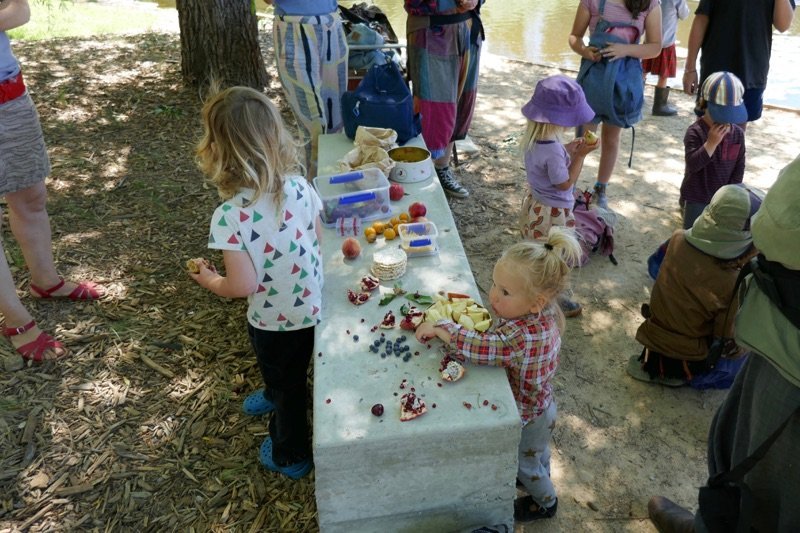 We then hung out on the jetty, playing games, not quite believing the adventure we’d just had. 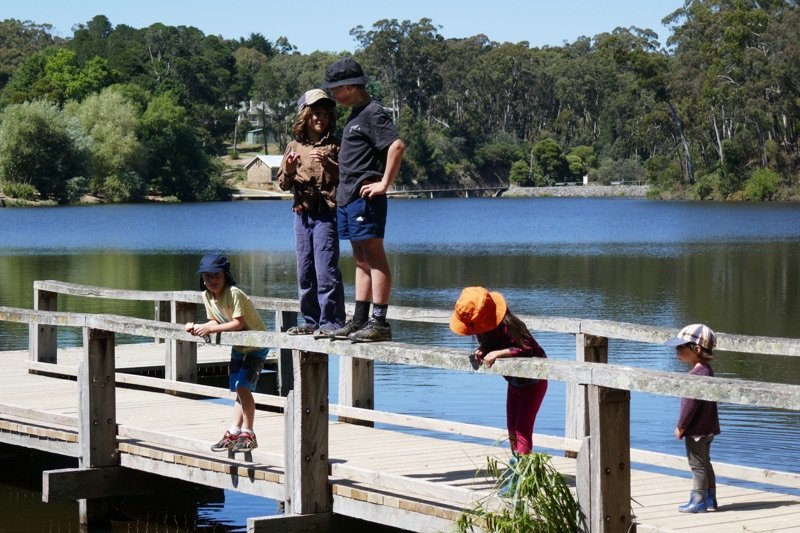 Luckily Meg and Patrick took some photos to show friends and family, because otherwise they would not believe the time we’d just experienced.