Subscribe
The Austrian painter Eugene von Guerard painted this in 1864. An early colonial image of the place our privilege calls home. 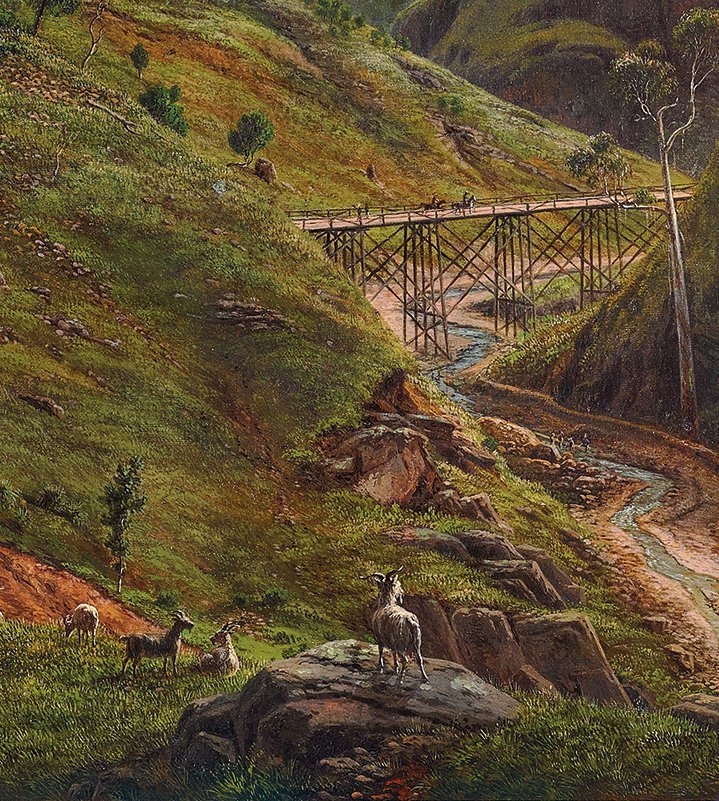 There was a rapid appearance of European peasant goat grazing, browsing and shepherding upon Djaara peoples’ land at the moment when those who spoke old Dja Dja Wurrung tongue, and had survived the prior massacres, sickness and dispossessing intransigence of settlers (backed by the British nee Roman law terra nullius), were being forcibly relocated to Coranderrk.
Due to gold extraction, over grazing and then industrial-era forms of land management the wet gullies and creeks of Hepburn and Daylesford are now infested with woody perennial weeds such as gorse, broom and blackberry. While these plants provide useful ecological services – habitat, food, soil stabilising, etc – their dominance can diminish biodiversity and produce a fire threat each warming summer.
We’ve been involved in providing a climate-era response to this predicament that may be just more blind colonialism but ironically we think it is potentially a way back to the sort of land management practices of Djaara people. Using goats over a 4-year period as well as sensitive hand tools to diminish the dominance of weedy perennials, we believe we can begin to convert these steep stream ecologies back into perennial indigenous grasslands and ecology that will radically reduce bushfire risk.
As Goathand cooperative, we have just finished a trial collaborating with the Hepburn Shire Council and Federation University and the results are very positive. What we need now for this climate-safe weed and bushfire mitigation project to both upscale and outscale is broader government and community understanding of the succession process that could lead back to the possibility of Dja Dja Wurrung ecological burning processes, which have not been viable because of great stands of 2-3 m dry gorse, broom and blackberries that can climb fire up into eucalyptus canopies.
Below is Goathand cooperative‘s first film showing the trialling of goats and hand tools. Imagine this scaled up to 200-300 goats (permanently rotating around the shire so as not to overgraze until the dominance of the weeds are treated) and 10-15 human bodies with loppers and pruning saws for a few day’s work here and there. The people labour is generally nominal because the goats are so effective, but the human labour and goat interrelationship makes a beautiful marriage (not just pragmatic but one of love) and moves us towards a significant post-industrial behaviour change. Very quickly the town’s bushfire risk (Hepburn is one of the most fire-at-risk towns in Victoria) and weed cycle would be greatly diminished and no more glyphosate in our waterways or soil disturbing mechanical treatment or white-fella burning regimes, which all put the weed cycle back at stage one, dry out moisture in the soil and thus causes more fire-proneness. This is not ideal when temperatures are warming.
If you’re reading this in your inbox this video will not appear. Head here to watch.
If you’re a journo and you’d like to know more about Goathand cooperative, please get in touch.