Bombing countries to kill terrorists not only ignores the ground conditions of terrorism, it exacerbates those conditions. Locking up criminals not only ignores the conditions that breed crime, it creates those conditions when it breaks up families and communities and acculturates the incarcerated to criminality. And regimes of antibiotics, vaccines, antivirals, and other medicines wreak havoc on body ecology, which is the foundation of strong immunity… – Charles Eisenstein, The Coronation, 2022 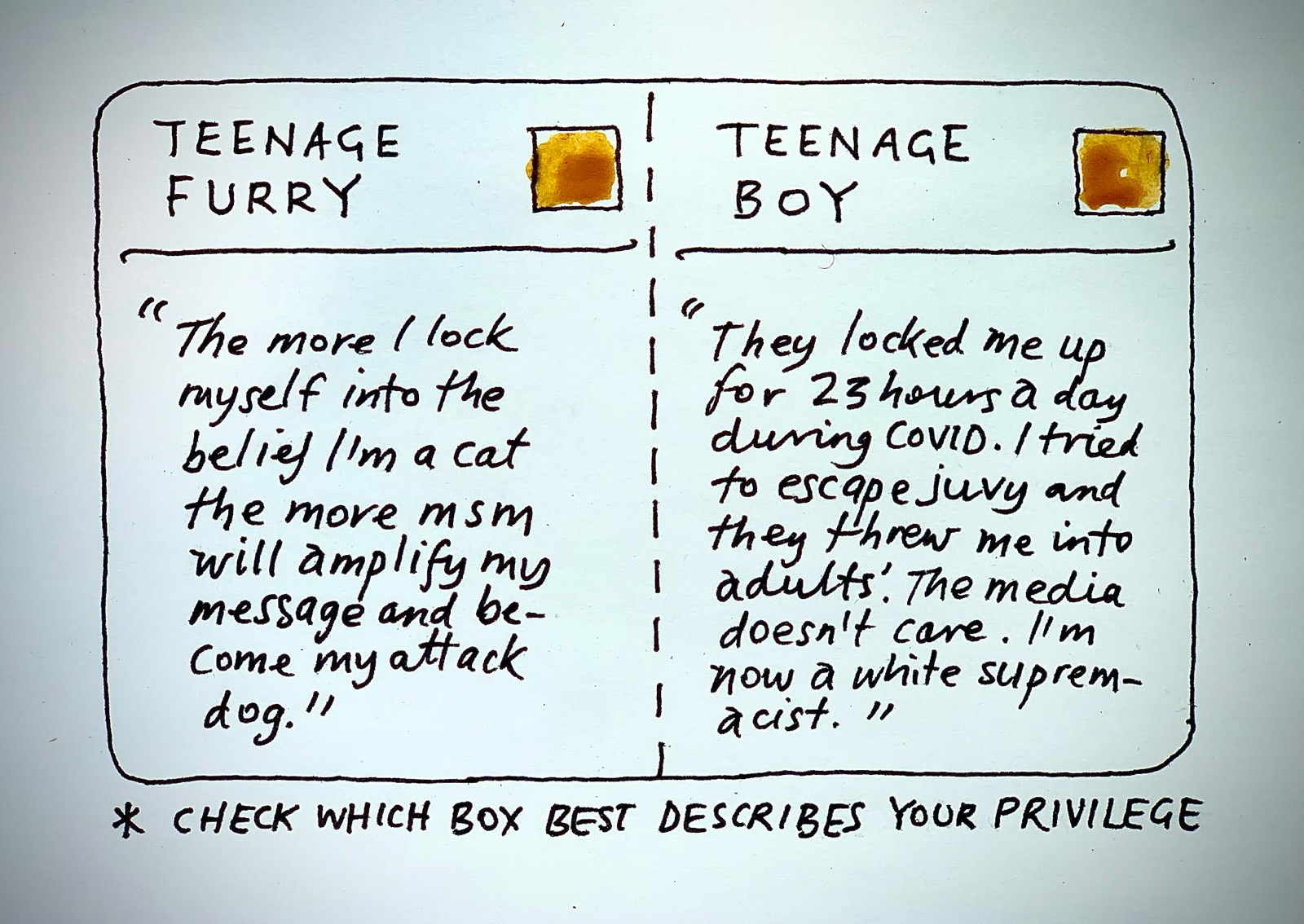 Australia’s most vulnerable young people have no meaningful support. Those who find themselves in prison experience a nightmarish reality, especially since Covid. If they want to see family they have to keep lining up for jabs, which as we now know are dangerous to young people, and therefore illogical and unethical to mandate. If prisoners want to eat fresh vegetables, breathe clean air, or feel natural sunlight on their skin mediated through the shade of a tree they have Buckley’s chance and none. Anything that can help them to heal or grow is road blocked.

Bourgeois culture, which frames much of the Australian experience, clings to strawman crusades promulgated by social and legacy medias, while at the same time this dominant cultural paradigm turns a blind eye on the harsh realities and dark and complex relationships of our most at-risk youth. Judgement and punishment are metered out rather than rehabilitation, deep listening and compassion. “Compared with Australia’s 53.1 per cent, Norway’s recidivism rate after two years is 20 per cent, in Austria it is 26 per cent and in Finland, it is 36 per cent. The US state of Oregon and the Canadian province of Ontario have recidivism rates similar to Finland.” Welcome to the incarceration nation; building more private prisons and growing an internment caste system to advance another lucrative misery industry.

While we can have compassion for all young people in whatever complexes they’re moving through, we can also remain critical of the adult world hubris, double standards and doubling down that continues to harm youngtimers. Can we imagine a world where young offenders are treated with as much media compassion and attention as furries? In many other countries programmes are run to help prisoners process their grief – the grief that lead them to drugs and/or crime, the grief they hold for what they did to others, the grief of living in sterile cells exiled from community and ecology.

Our social ills often have similar root causes, it’s just the expression of them that differ, based on our personalities and life contexts.

What leads one teen to bulimia, one to furrydom and one to meth and burgs? The answer, in our view, can be found in the disconnected values and projects of neoliberalism. Drugs and crime, body image anxiety, and other kinds of dysphoria all find lucrative legal markets – private prisons, social medias and hyper medicalisation products ranging from ritalin to puberty blockers. Neoliberalism knows that unhappiness and sickness pays handsomely, it trades on it and factors it into GDP. Neoliberal institutions – universities, governments, medias, etc. – that use the forms of neoliberal economics and psychopolitics, are unwilling to self examine how they support and fuel such alienation, disconnection and social destruction.

While this website is dedicated to positive responses to the predicaments of our time, we are also committed to calling out that which stops or blocks the rebuilding of connected communities and ecological knowledges and interrelationships. One of the most profound things we can do to carry out this work is to switch off the neoliberal medias, and invest in an ecology of views, journalism and discussion that is diverse, critical and creative. Aaron Maté for your news on the Ukraine and Russian war, for example, or CJ Hopkins for your awareness of the rise of New Normal fascism, or David Holmgren on the hubris of new energy tech promises, or Vandana Shiva and Bret Weinstein on the genetically modified organism that is Covid.

Neoliberal medias hold the power for neoliberalism to flourish, for propaganda to be normalised, for dissenters and heterodox thinkers to be continually hounded, censored or labelled as misinformation spreaders. The response to any diseased and dying monoculture is for a resurgence of weed species to repopulate and prepare the trammelled ground for the regrowing of forests. The war against weeds is unwinnable, so too the war against diverse approaches to science, politics, health, young offenders and governance. The time to regrow diverse cultures of place is now, and leave behind the medias that grow alienation, fear and control.

This year we’ve made a further commitment to advancing independent voices and platforms. What reporters, social and ecological commentators, podcasters or writers are floating your boat at the moment? Who are the weeds that are nourishing you? What is the ground they are rehabilitating? As always, your comments are welcome. All power to the those who smell rats and who are acting on all their senses of knowing.