Using Oxford University’s Our World in Data for Covid Deaths in Australia, we see a very grim picture today. The 84% of Australians who were either threatened with their livelihoods or thought they were doing the right thing and lined up for novel Covid injections (approved by the Australian Government’s TGA), may feel a mix of dismay, anger, disbelief or shame while perusing the below data. We wholeheartedly hold compassion for you, as we all move through this time together. 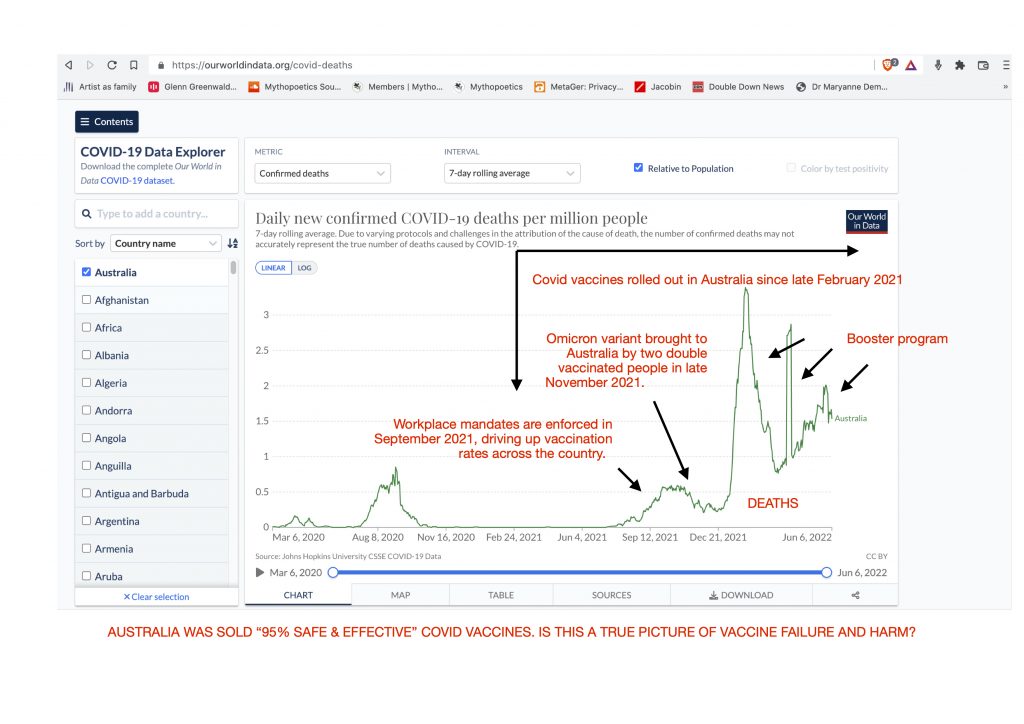 As stated in the above diagram in red (which are our additions, as well as the black arrows), The Guardian reported two fully vaccinated people brought Omicron to Australia from South Africa (29 Nov 2021). The only people allowed to travel into or out of the country at the time were “fully vaccinated” people. To reach “fully vaccinated” status meant (back then) that two Covid injections were required. But as the ‘experiment’ continues it now means regular booster doses are needed to receive the Green Tick of compliance. Omicron’s arrival in late 2021 coincided with a mass booster program in the first two months of 2022. Please hold this in mind, we’ll return to Jan-Feb 2022 shortly.

The below chart maps the rollout of the vaccines (up to June 6, 2022), which (if you compare with data above) shows the death rate rising in step with the vaccination rollout, which is fairly consistent with most mass vaccinated rich (obese and heavily medicated) countries. Both doses and deaths begin escalating from September 2021 onwards, which is when the mandates came into force in Australia. 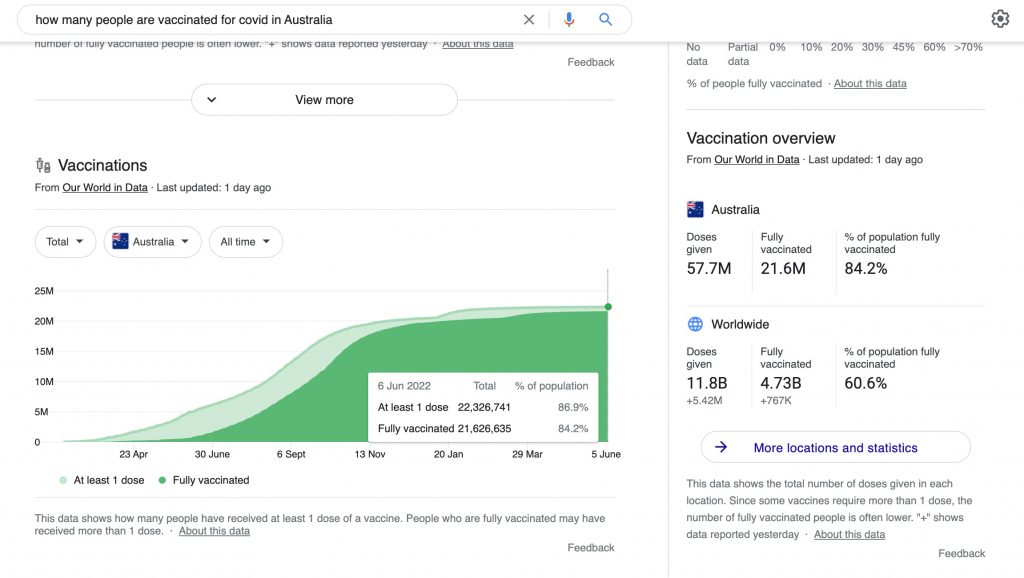 In October 2021 we made this comparative video between Madagascar and Australia. Our findings were that Madagascar, although being much less resourced was faring considerably better. This is despite the small African country being almost 100% unvaccinated. Here’s the comparative Covid death rates today, seven months on, between two countries with a similar size population. 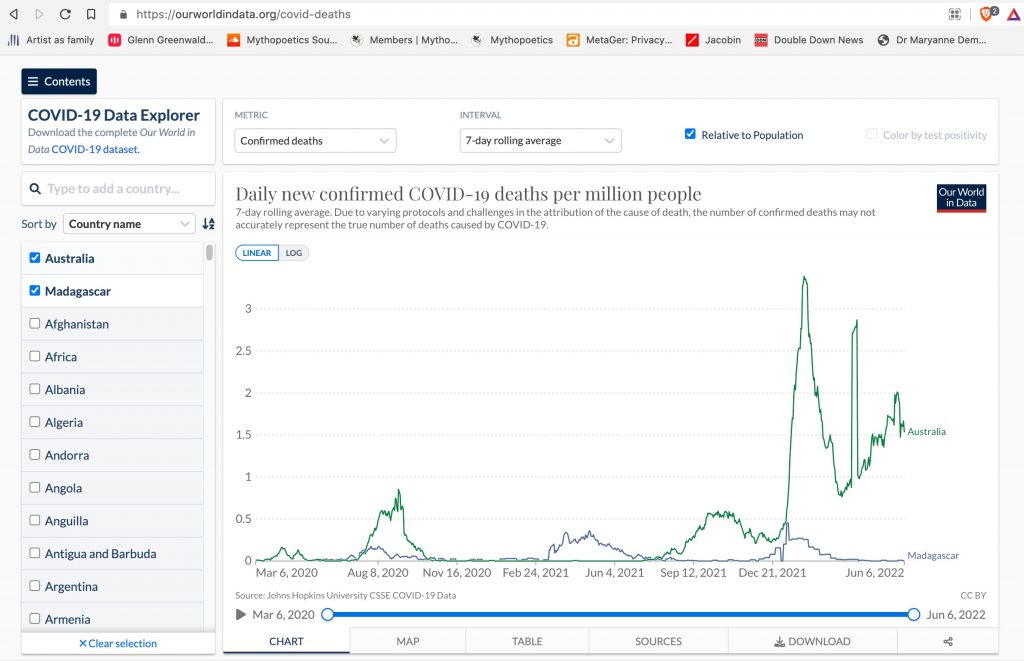 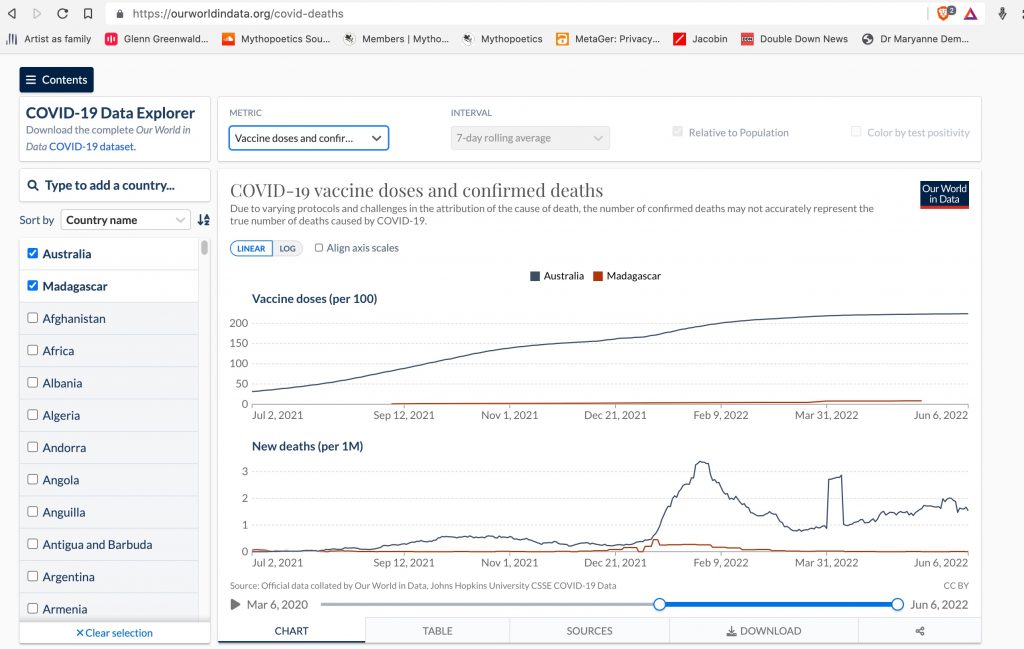 Surely successful vaccines would show the complete reverse of the above data. Furthermore, if we compare Africa and Australia the pattern remains consistent – lowly vaccinated African countries have low Covid deaths, whereas highly vaccinated Australian states now have high numbers of Covid deaths, especially in Victoria. A significantly more obese country with an older population, Australia better fits the disease profile for experiencing Covid negatively. However, with how we were sold these novel vaccines – that they’d save rather than harm vulnerable people – we should be seeing the opposite of what Oxford University’s Covid-19 Data Explorer is today revealing. 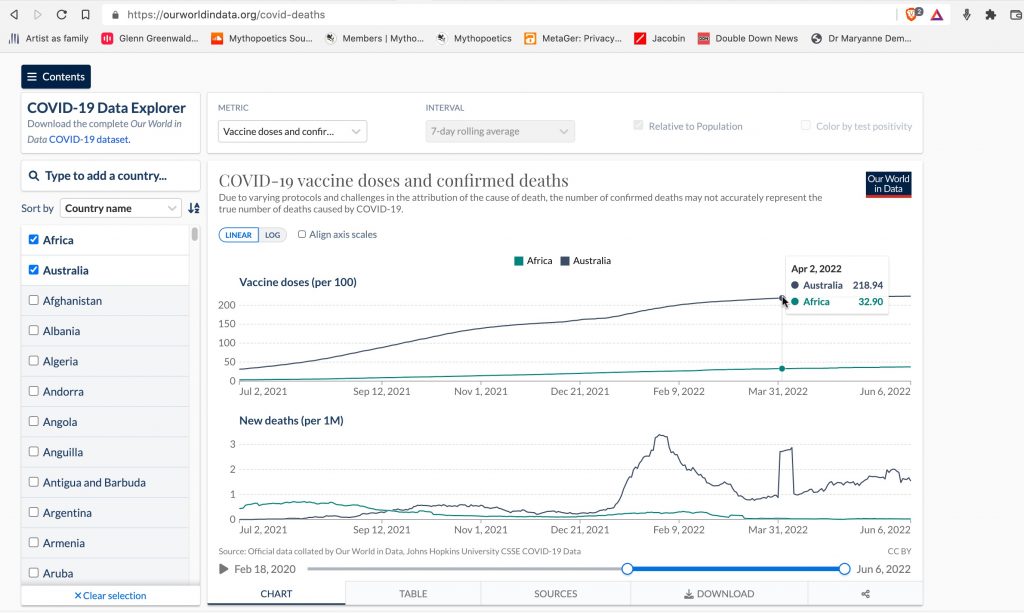 It’s even more pronounced if we compare Africa with the US. 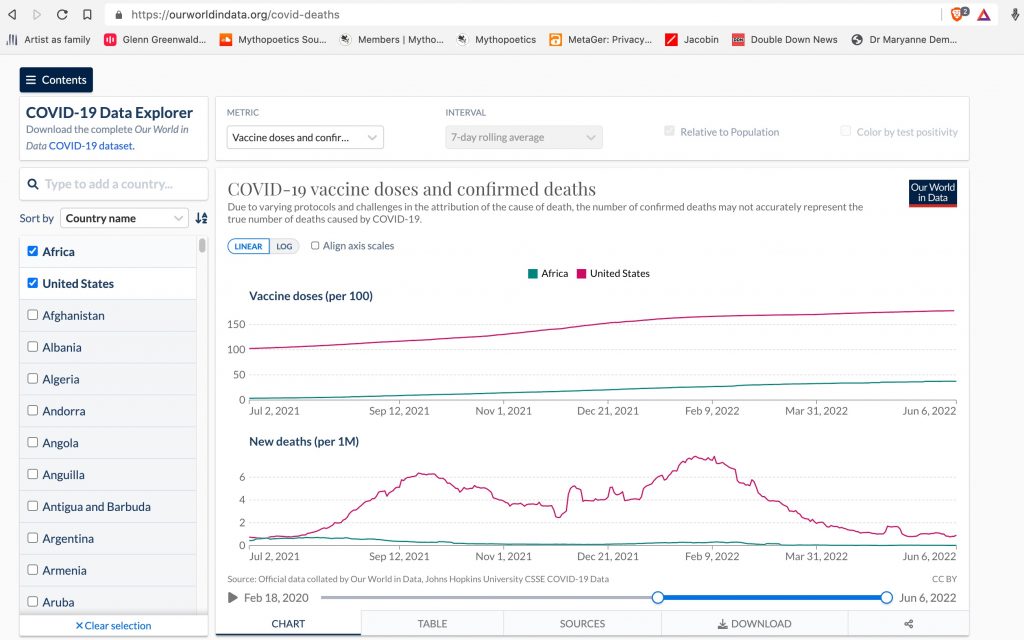 Once again, Covid deaths grow in step with vaccine doses. As Americans have been increasingly rejecting the vaccines this last few months, the deaths have started to decline. The relationship between dose and death is not surprising because Pfizer declared ‘Covid’ itself (see below) to be an adverse event (or vaccine injury) in Pfizer’s six month trial data on adverse events. This was one document of many released by the courts after the Public Health and Medical Professionals for Transparency group challenged Pfizer and the FDA to do so, and won. Both the FDA and Pfizer wanted to lock up this data for 75 years. Repeatedly getting Covid (via vaccination) is seemingly wreaking havoc on people’s immune systems, thus making them increasingly more vulnerable to diseases, not just to Covid-19, and increasingly more vulnerable if they are already suffering comorbidities. Please hold this thought, as we’ll look at (just released) all cause mortality figures in Australia, shortly. 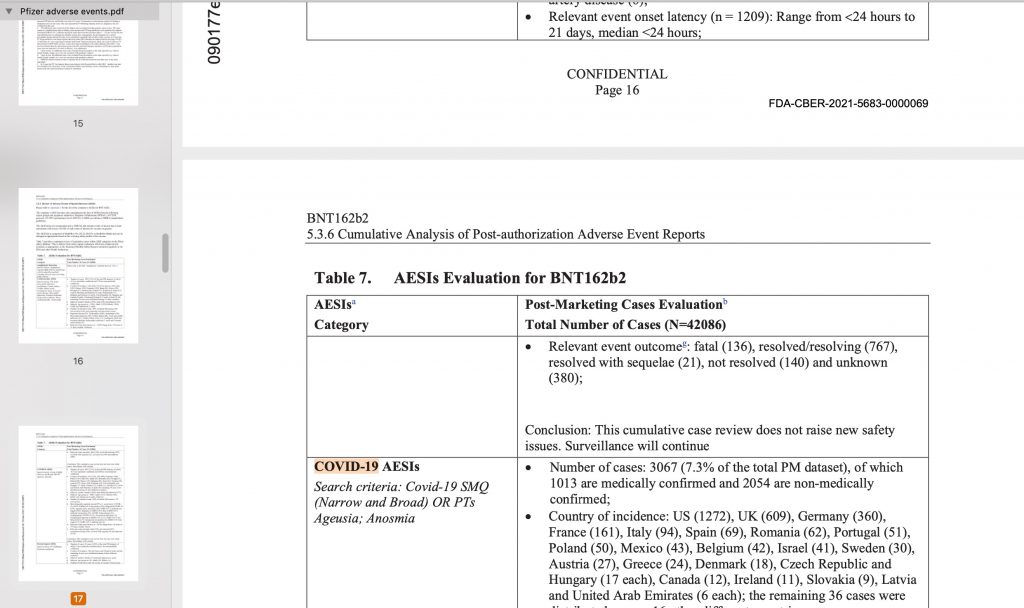 While Africa’s younger population plays a part in having fewer Covid deaths per million than in Australia, it certainly raises questions as to why a country would vaccinate anyone under 50 for Covid, let alone children. Herd immunity by vaccine has radically failed, as experts rightly warned despite receiving ridicule and scorn by the establishment, yet still the global experiment continues apace, no doubt due to all the billions of dollars in investment that countries like Australia have spent and, one could now rightly argue, wasted. In Australia a forced vaccination program for Covid has been a well orchestrated strategy, sneakily disguised as “voluntary.” But there were some legal hurdles the government had to go through in order for that to occur.

Here’s the Federal Government’s statement on mandates and their so-called ‘voluntary vaccination’ program in Australia. 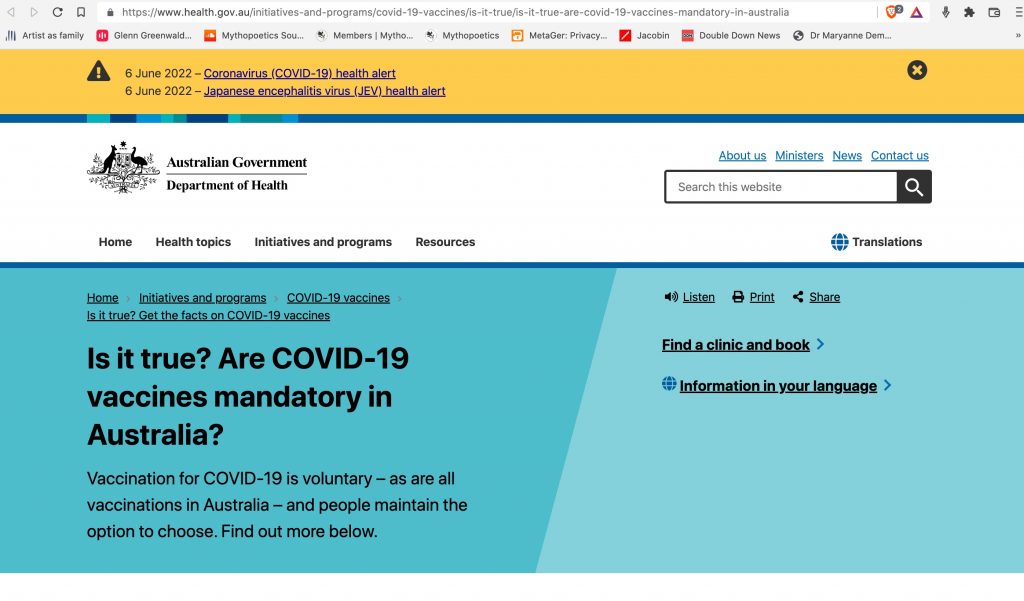 By putting the onus on businesses to do the forcing and coercing through mandates – get jabbed or loose your job and thus economic security – the Australian governments (including the states) avoided breaking the Nuremberg Code, which determines, The voluntary consent of the human subject is absolutely essential, where the person involved should have legal capacity to give consent; should be so situated as to be able to exercise free power of choice, without the intervention of any element of force, fraud, deceit, duress, overreaching, or other ulterior form of constraint or coercion; and should have sufficient knowledge and comprehension of the elements of the subject matter involved as to enable him to make an understanding and enlightened decision.

The reality of ‘vaccinations are voluntary’ was expressed here in our town a few months back by former midwife, Sally, whose sister Wendy was one of thousands of Australian nurses sacked for not taking one of the experimental vaccines that the Federal government declared “safe and effective.” Here’s the video we made of that protest event. 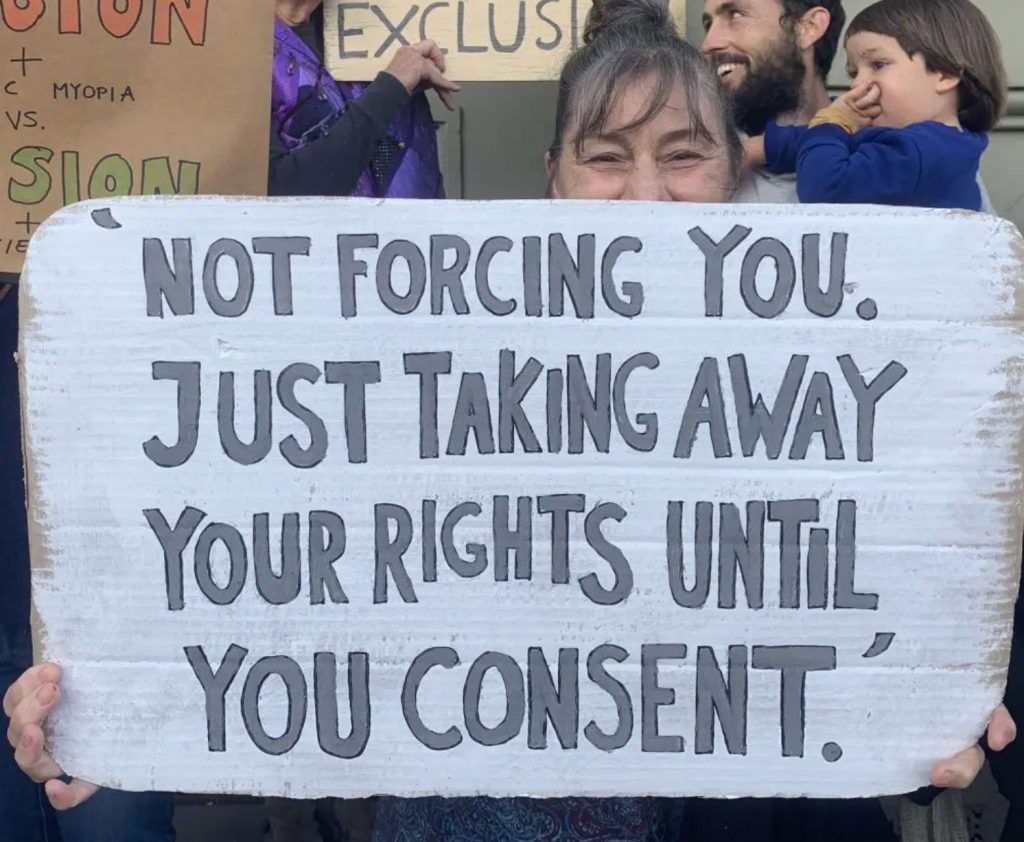 Our story about agricultural consultant, Liz Mann, who was forced into getting vaccinated by the threat of losing her job, and was injured by Pfizer’s injection, is just one example of many human rights abuses governments have brought upon the peoples of Australia. The story we presented on the sacking of Indigenous arts workers in Victoria, is yet another. We believe there are thousands of stories in Australia alone that similarly expose the abuse, corruption and conceit brought about by the official response, but the big-money-captured media will not share them. As a result vaccine failure and harm have become taboo subjects in Australia and there is a growing fear that any negative discourse about vaccines will undermine the vaccine industry at large. This unscientific belief has become institutionalised – we don’t want to encourage vaccine hesitancy, so nothing negative can be spoken, shared or studied. Instead of transparency and investigation, lies and deceit aggregate, and as a result this undermines trust in public health in a growing portion of the population, and leads to, well, the current vaccine crisis.

What we’re now very curious about is how our politicians, journalists and bureaucrats will explain the 20.5% increase in all cause mortality in Australia in the first two months of 2022? How can “safe and effective” vaccines produce more all cause deaths? Is this the result of widespread immune fatigue? Even without Covid deaths, all cause deaths were more than 10 percent above historical average. 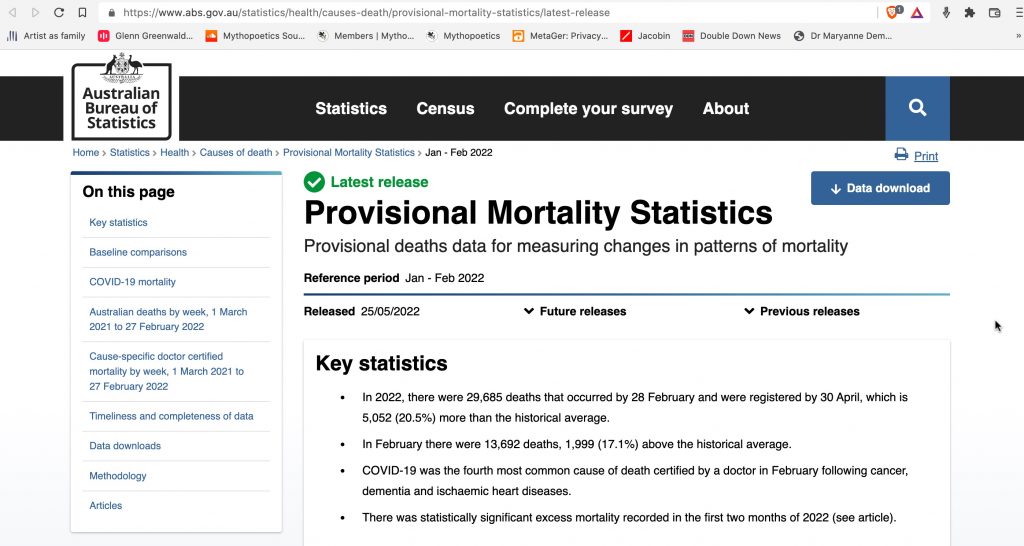 This period, Jan-Feb 2022, is when state governments were imploring their citizens to receive booster shots or “top ups”, despite Israeli scientists in late 2021 warning about immune fatigue from repeated shots. 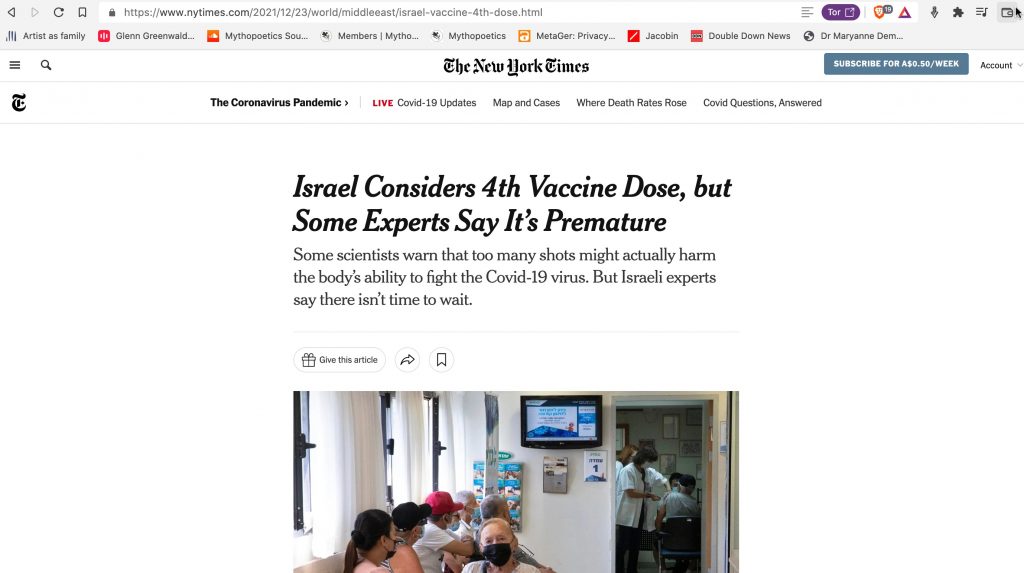 It now seems clear to us that immune fatigue is driving Covid deaths in the most vaccinated countries. But Dr Naomi Wolf (along with 3000 doctors and medical researchers, looking at the aforementioned Pfizer doc and thousands of other released docs, takes it much further. She and her colleagues call it a global genocide because Pfizer, Moderna and the FDA knew of the harms of their experimental products and wilfully covered them up. See our video, Can we trust the ABC and FDA for more insights on this.

So, for people who live in Australia, we have a few questions: Should those of us who never trusted Pfizer, Moderna and AZ with our health, still be punished and vilified? Are we really selfish, as The Guardian loves to promulgate?

Please note: The Guardian is a global newspaper based in the UK that has received millions of dollars from Bill Gates, a billionaire who invests in vaccines and whose net worth rose 30 billion dollars over the past two years of the pandemic. If you’re on board with Gates’s GMO and MRNA synthetic-biology ideology and on board with his buy up of what some call ‘progressive media’ in order to push these ‘tools’ onto the world, then you’ll probably believe in advertorials for Gates like this (as published in The Guardian). 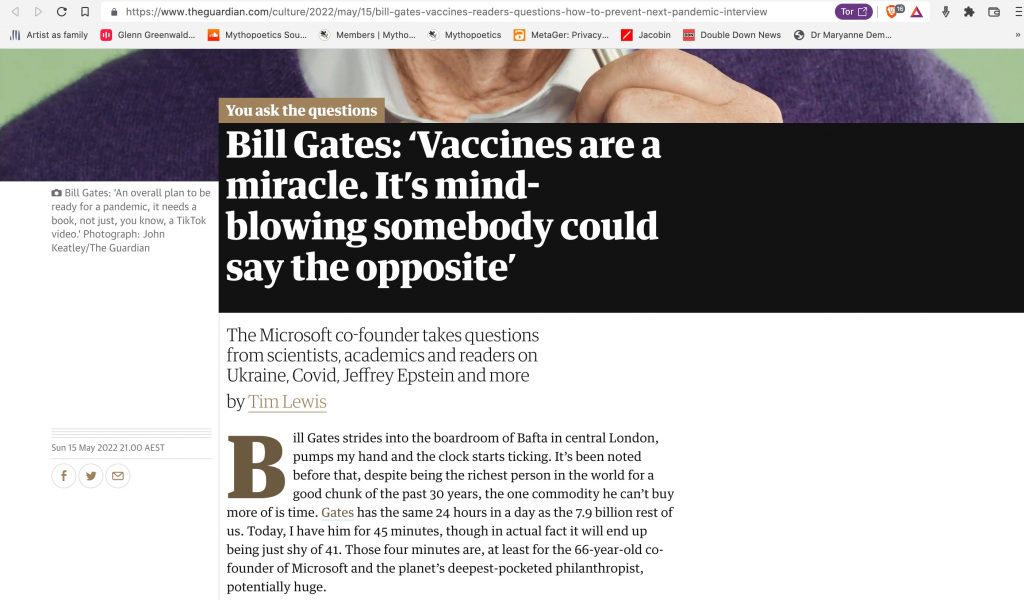 The above article is what captured journalism looks like. Media corruption is in essence the acceptance of money to skew a given narrative and demonise the alternatives. That this has become so commonplace in the contemporary moment most likely means there is much suffering on the horizon, because a society that has lost sense of fair play, integrity and transparency is a society in permanent crisis. Becoming aware of such media corruption, and boycotting media organisations who push billionaires’ business agendas is the pathway back to a more egalitarian and diversely ranging society. It’s up to everyone to be vigilant with bought narratives and to develop a red-flag intuition for media hit pieces that promulgate on behalf of the world’s billionaire class.

The Trusted News Initiative (funded in large part by the likes of billionaires Bill Gates and Jeff Bezos, who owns The Washington Post) is the arrival of The Ministry of Truth, only a handful of years after Orwell ‘predicted’ it. Any alternative or dissenting view is now labelled mis or disinformation. Gates, Bezos and co have been smart to capture liberal and Left-leaning media from NPR, BBC, The Guardian etc., because traditionally it has been the Left to raise red flags at corporate intransigence and take-over. But now it is the Left who is either silent on, or actively championing, Gates’ I’m-gonna-fix-climate-change-and-public-health-while-making-billions agenda.

But Gates and co are just one front of deception. Governments in the rich countries enlisted behavioural psychologists to help persuade their populations Covid vaccines were both safe and effective. This is the sort of ‘messaging’ (a polite word for propaganda) that was blasted into our minds ad infinitum. 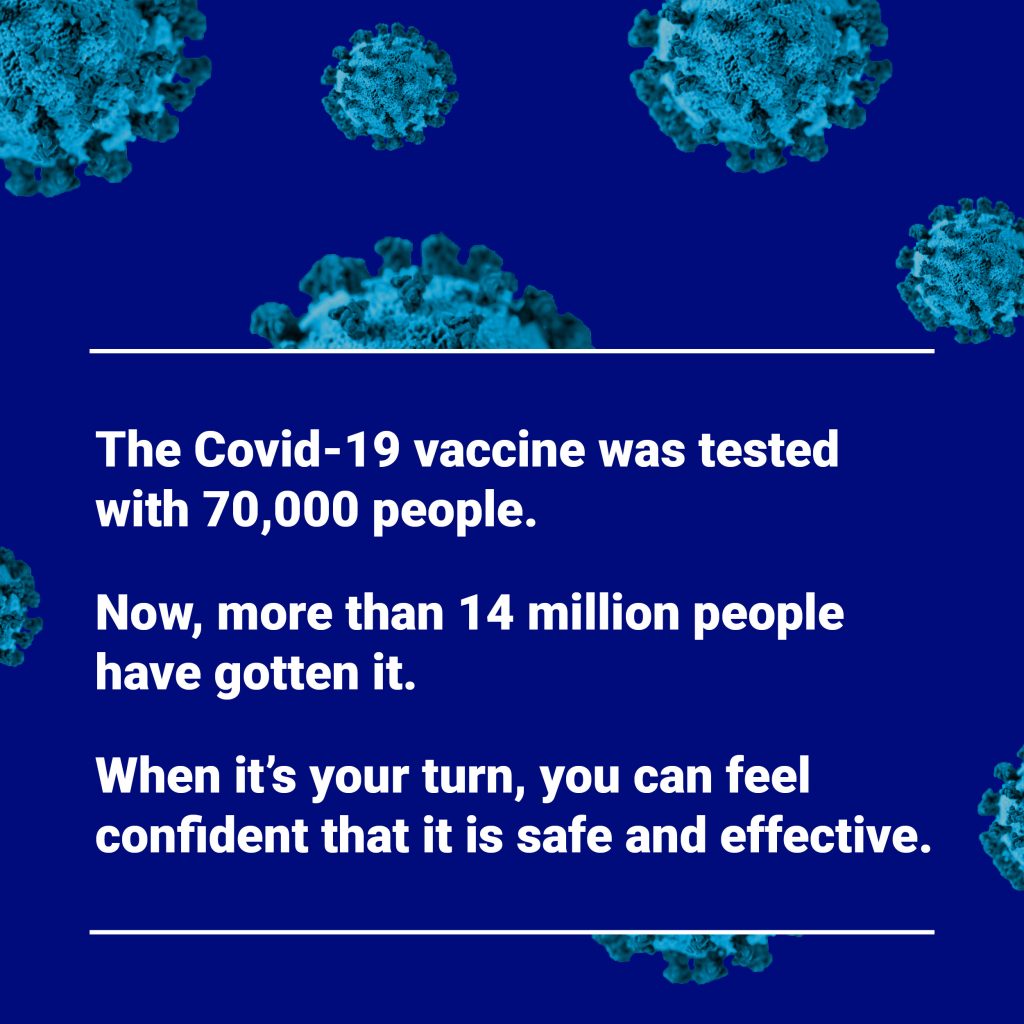 This piece of well styled propaganda does not say the testing is ongoing and that over 42,000 thousand people ended up with adverse reactions in the first six months of the global roll out of Pfizer alone, and it doesn’t say our governments have failed to set up adequate reportage mechanisms for people affected adversely by the jabs, although the Australian Government at least admits that ‘fatigue’ is widespread post vaccination, despite it playing down this particular injury, which may have deathly ramifications. 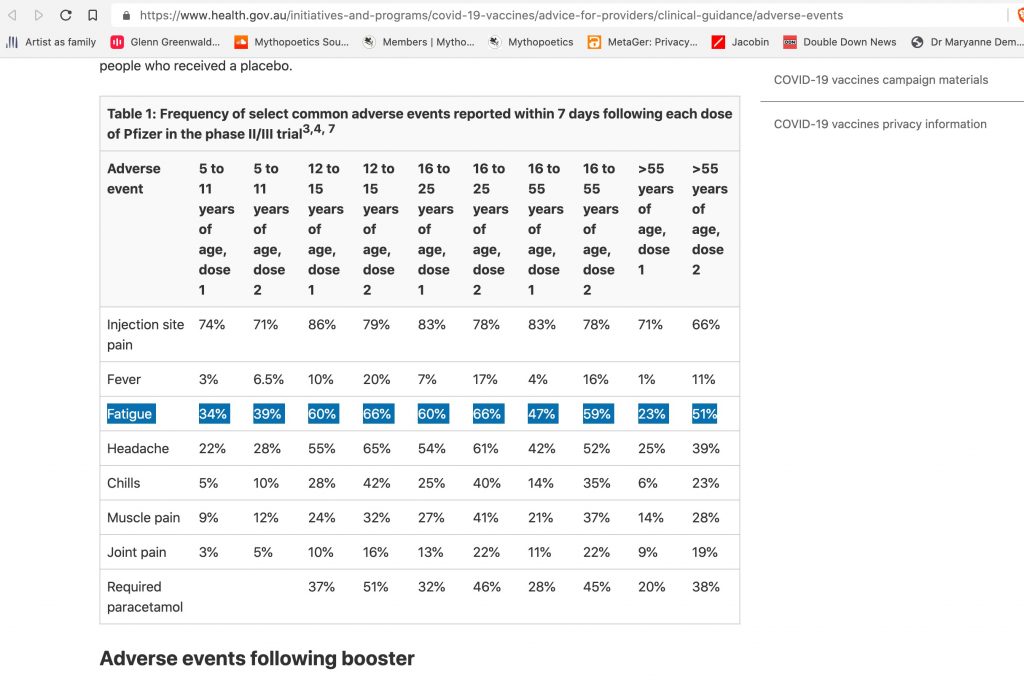 Billions of tonnes of ‘concrete’ is still being poured over the official Covid response story in the rich nations, and the “trusted news,” set up before most Australians knew what Covid was, continues to herald the Covid vaccine experiment as a tremendous success. But truth has an uncanny way of pushing up through the hairline cracks in any narrative and regrowing a forest where diversity will again flourish.

Corporatism-science will always harm, but human integrity is the perennial remedy.

95% safe and effective? What is your verdict? This is ours. We’d love to read your comments.