Subscribe
Around the camp our bare feet scuff across old shards of broken glass. With our movements the shards are brought to the surface of the humus and lie among the melaleuca needles. It’s old glass, previously smashed by rocket-fuel rage or fits of youthful chemistry. The little pieces shine up towards our growing astonishment. Why haven’t they sliced us open? There are so many. The melaleuca humus is soft, spongy and comforting under foot. This little forest encloses and protects us, gives us shelter from the coastal winds and privacy from nearby suburbia. 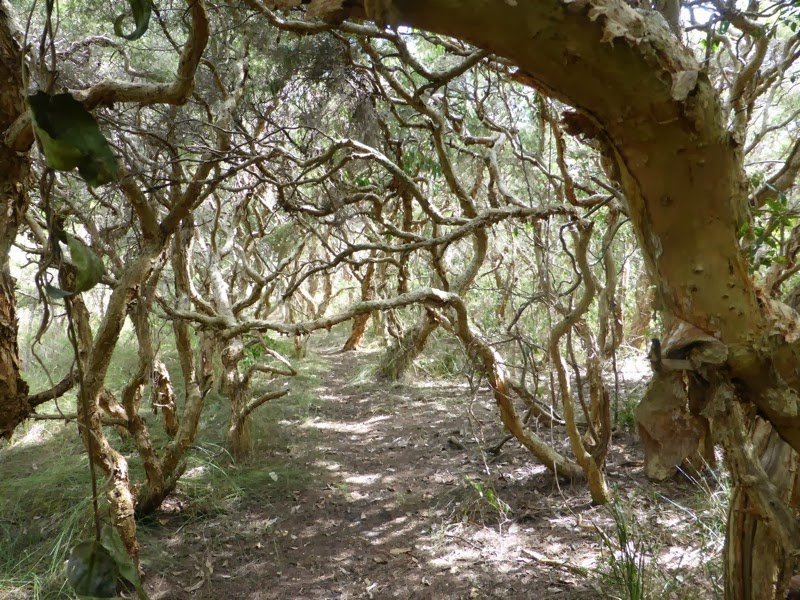 We left Erina Heights with the intention of heading south to Little Beach, but only after a few minutes of riding the heavens opened. Despite the roads becoming greasy and the traffic more dangerous we were at first invigorated by the rain. However soon we became soaked and took refuge in Avoca, 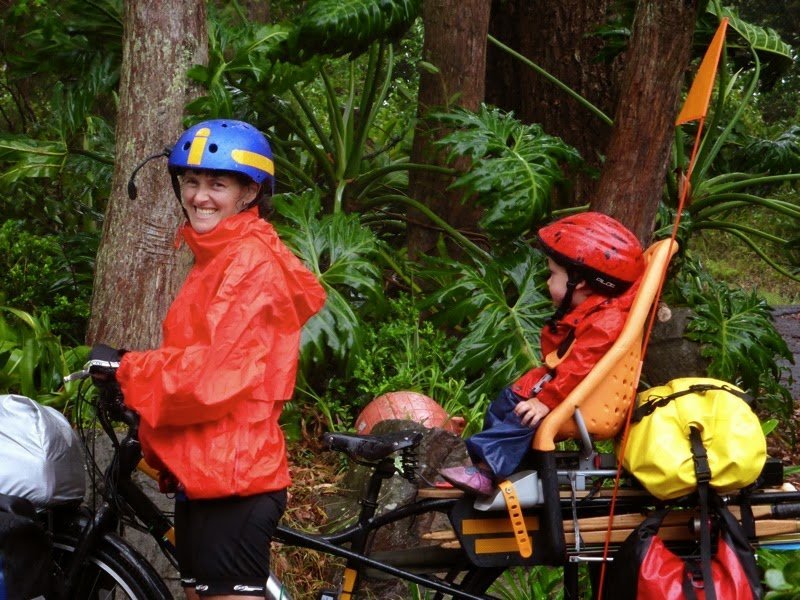 where we were rescued by Carol and John, their kids Ben and Angelina and their dog Kara. 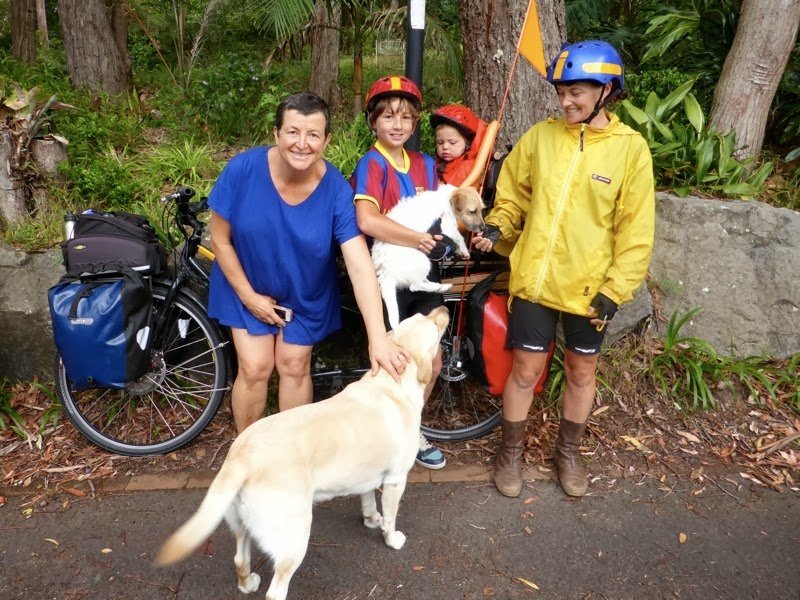 They invited us to stay in their downstairs studio and in return we offered to cook the evening meal. Carol took us in saying we didn’t look like psychopaths, and we responded that we were more akin to cycle paths. While staying with this happy family we discovered many common interests, such as a developing productive garden, 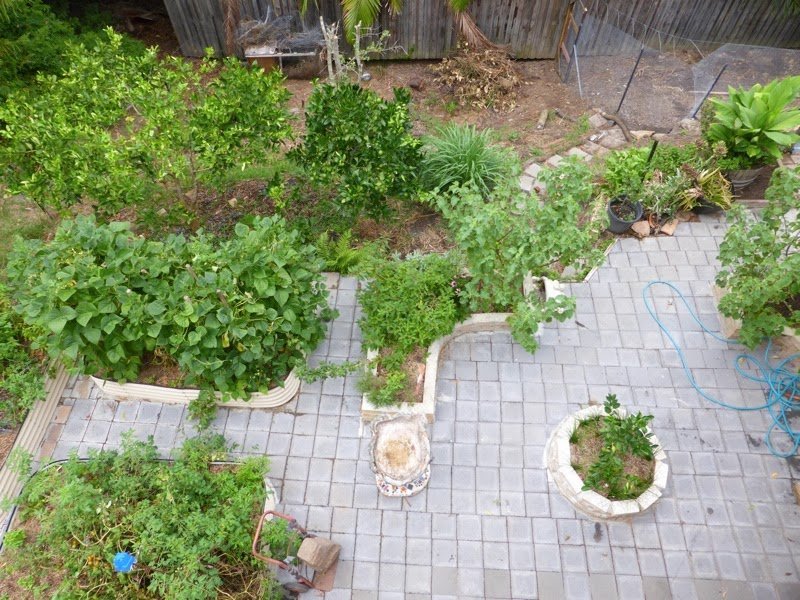 a growing love of chooks, 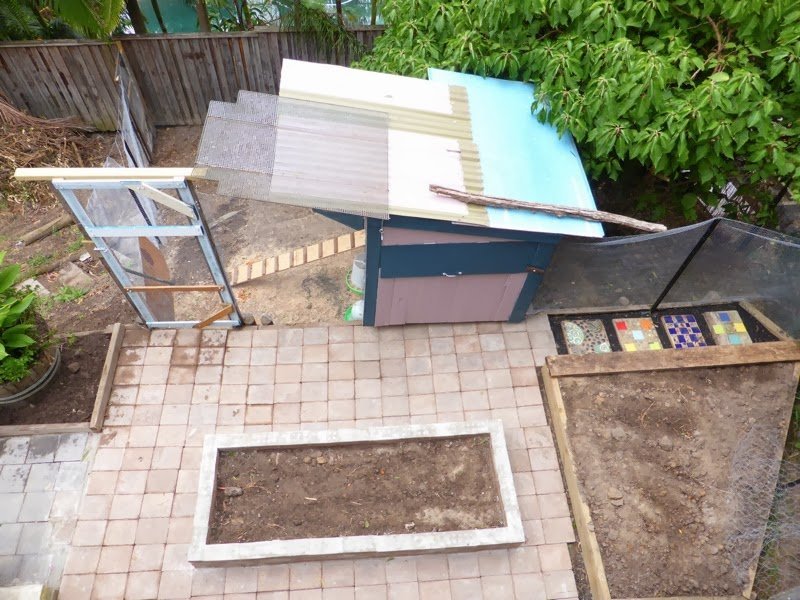 and a mutual respect for wise words. 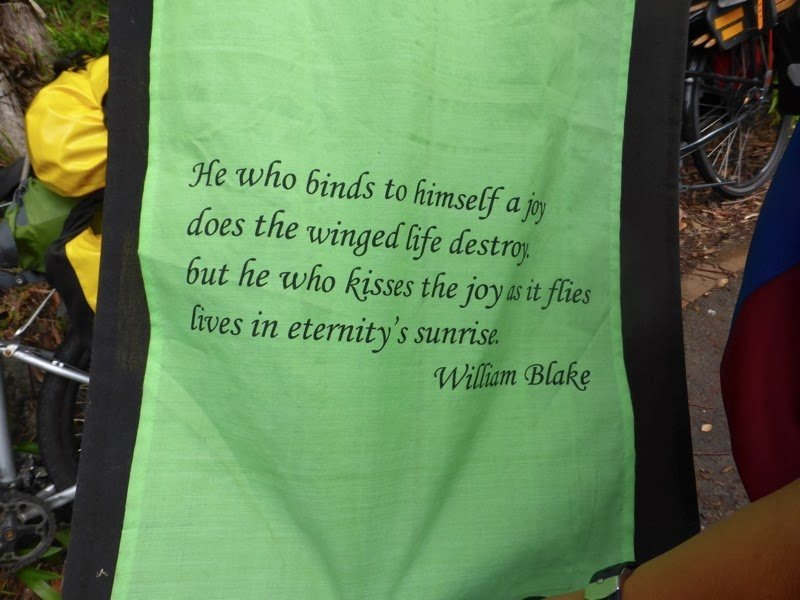 If Artist as Family were to have an epigraph, it would be this one. It encapulates the joy of chance, mutuality and embracing a no-expectations openness that refuses to cling to the anxieties, pollutions and nihilism of art careerism. 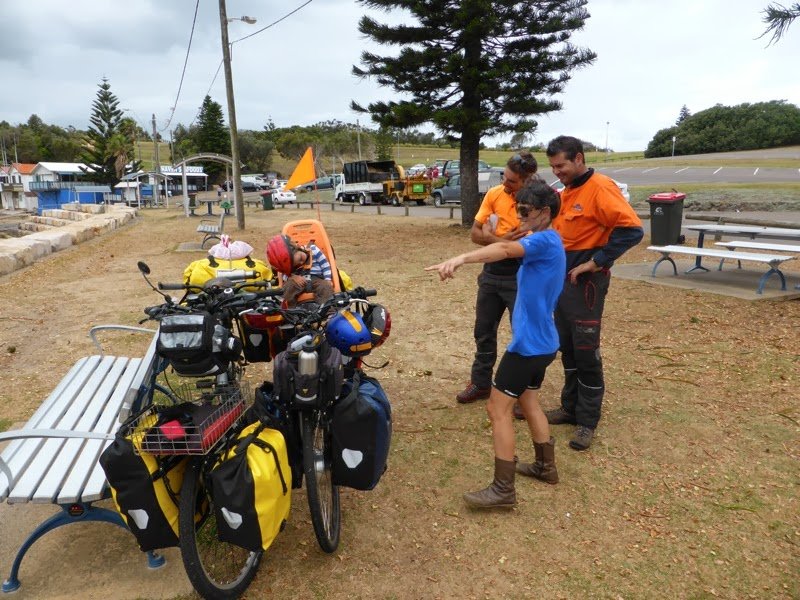 By the next day the rain had cleared and we farewelled Carol’s family. We abandoned the idea of Little Beach, and we once again set our intuitive compass north. But we didn’t get very far. Just down the hill we were intrigued by a little café growing some of its own produce. We stopped in and met one of the owners, Melissa, who so sweetly picked us basil to take away to have with our breadstick, cheese and tomato lunch. 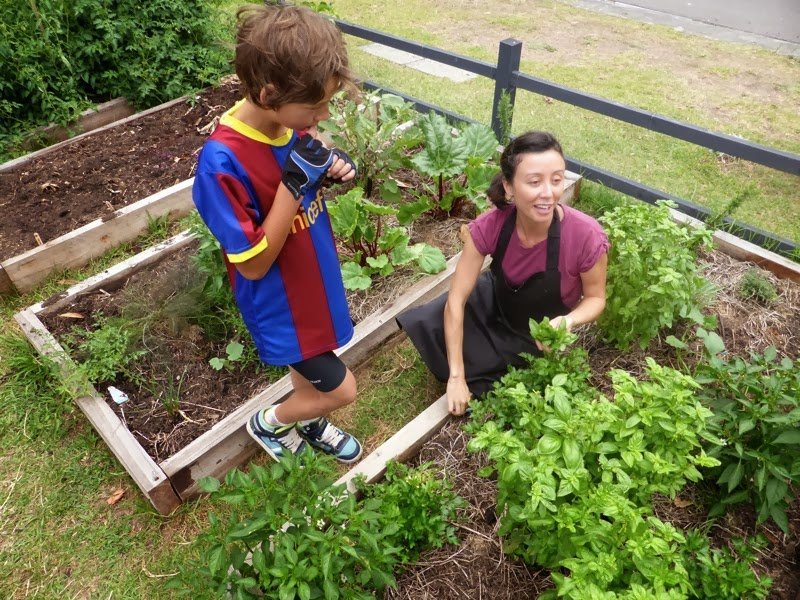 Melissa and co’s cafe Like Minds sees itself as much more than a business. It is a little hub of local food and environmental advocacy. They run a series of sustainability events and talks and it was exciting to experience their spirit. At Like Minds we also met more beautiful peeps. Sonia and Shane invited us to join their family at the Wetlands Not Wastelands Festival at Calga. 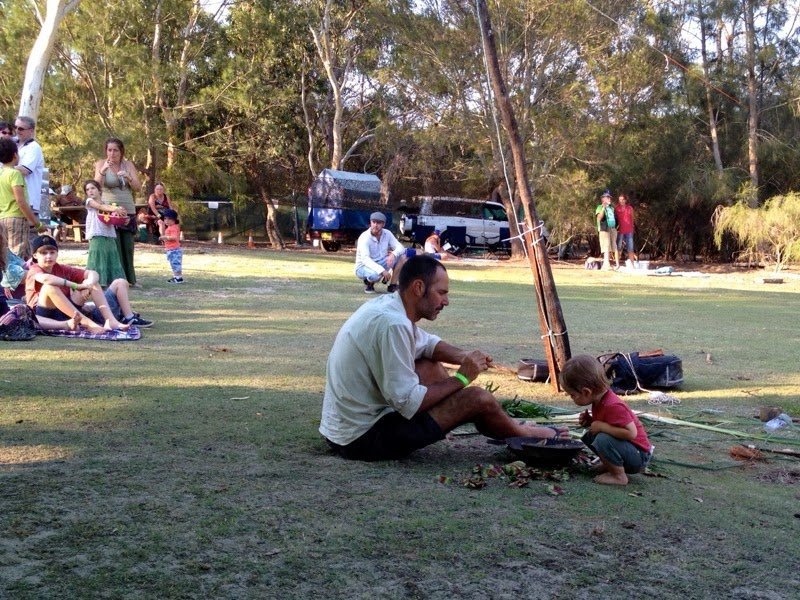 The festival was an awareness raising event concerning the proposed mining of sandstone aquifers that lie across the highlands above the Central Coast, as well as the social and environmental costs that extraction ideology causes more broadly. One highlight included Jake Cassar talking about the edible and medicinal benefits of various indigenous plants. Specific to our current project we here publish his gift-economy presentation (with his permission). Thanks Jake!

As we move further north our plant knowledges are decreasing. Local knowledge therefore becomes more and more important, especially if we are to keep eating well, and as much outside the damaging industrial system as we can manage. While at the festival we were also inspired by a young group of Indigenous performers who so confidently shared some of the riches of their culture, including a very local (non sweat-shop) textile of their own making. 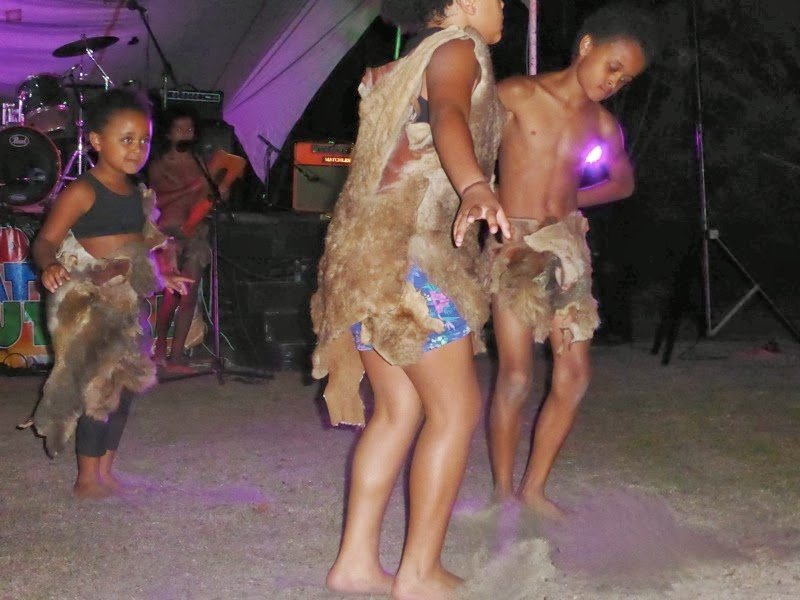 We are finding other local resources too. A while back we signed up to Warm Showers, a bike touring (couch surfing) website hooking up like-minds all over the globe. So when we arrived in Terrigal, found some local produce, 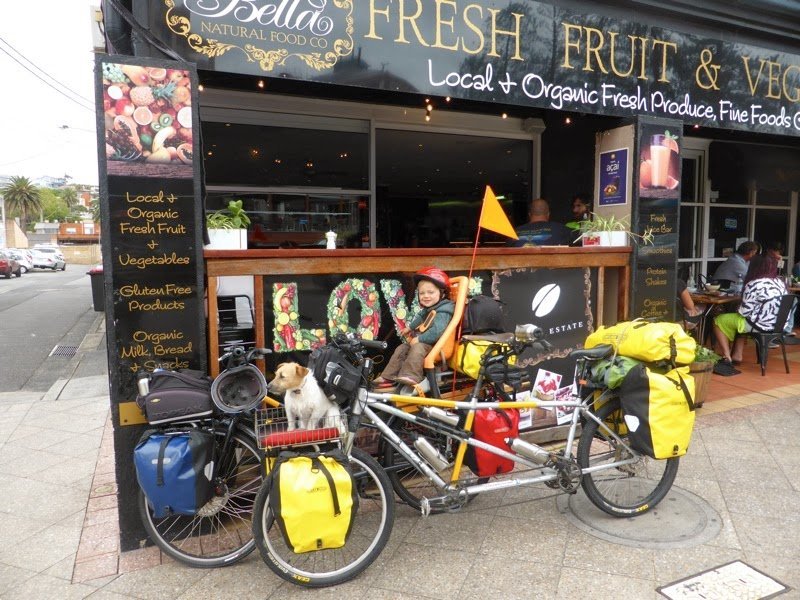 set up camp among the melaleucas, 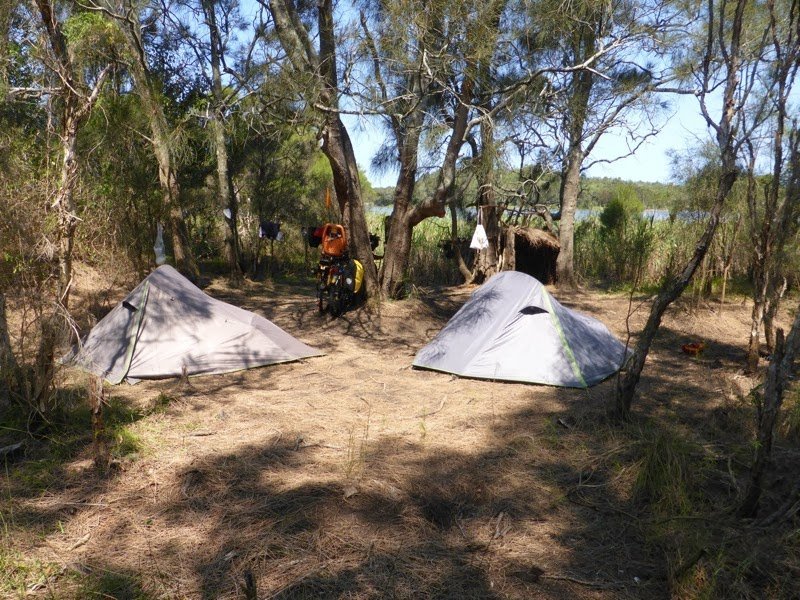 played shenanigans on the beach, 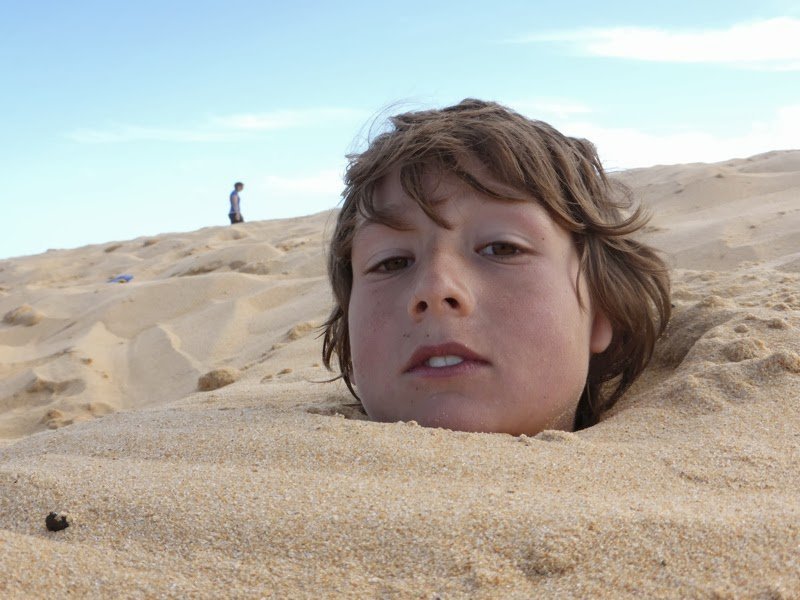 and built a cubby, 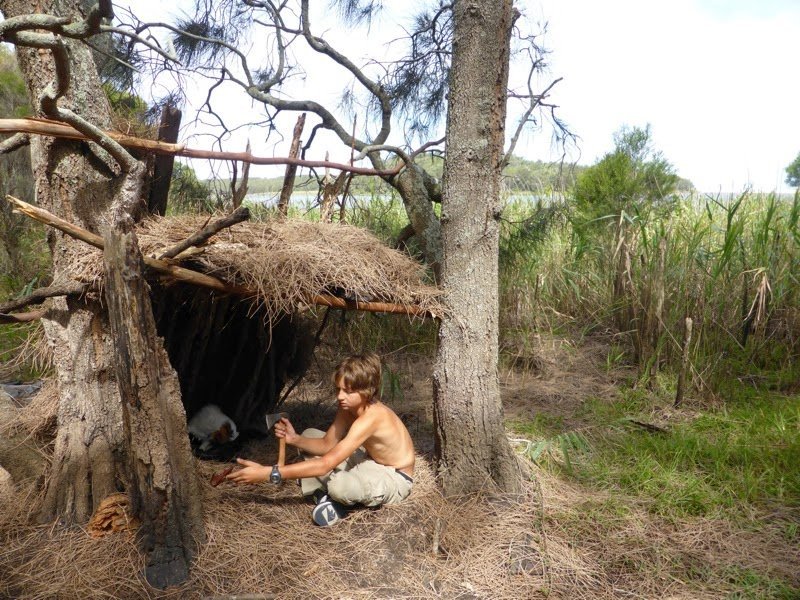 we called a couple of Warm Shower locals, who live just around the next beach at Wamberal. Meet the delightful Rodney and Deborah, who invited us around to do some laundry, share meals with them (including Rod’s mum’s home grown produce) and exchange bike touring stories. 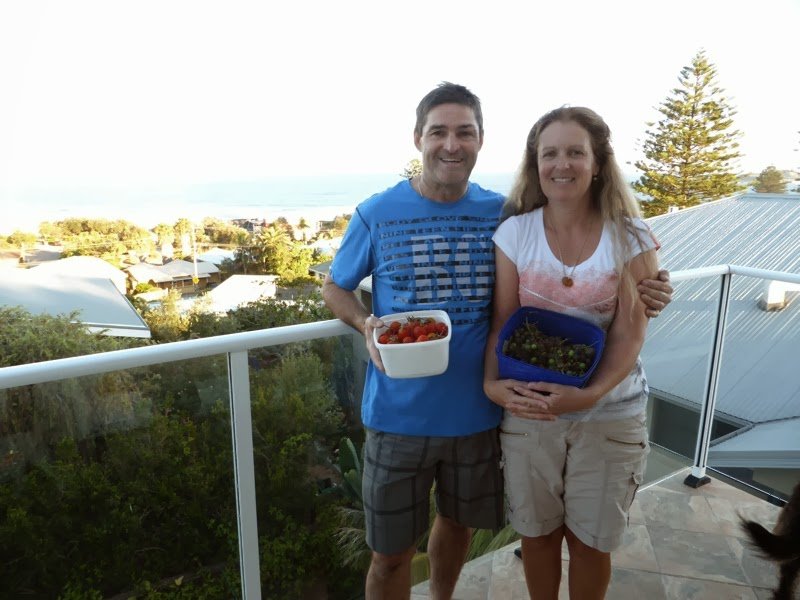 These generous peeps went out of their way to host us, including taking Zeph out for a surfing lesson, 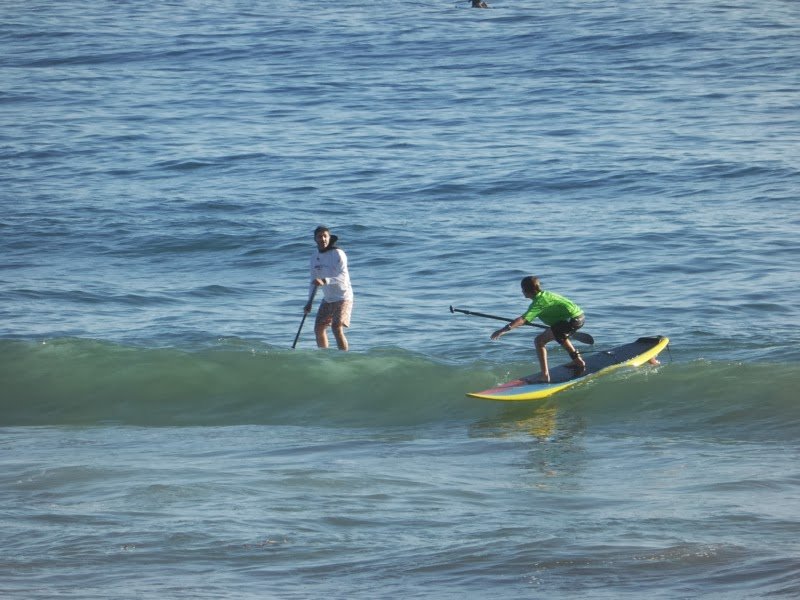 while we older ones got to work designing Rod and Deb a simple permaculture garden that features wicking beds, a food forest, a compost rotation system and a chook tractor on their 600 sqm block overlooking the Wamberal Lagoon and the Pacific Ocean. 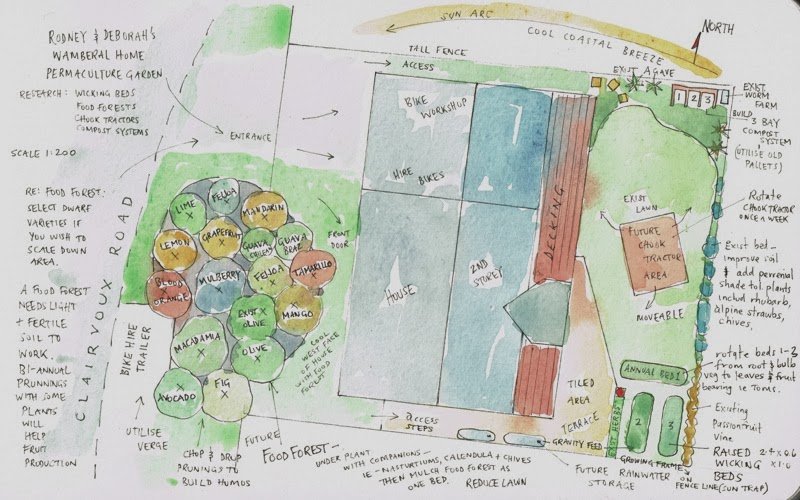 We were getting pretty settled in the Terrigal-Wamberal area and despite all the gift economy exchanges, lovely people and delicious meals, we were also keen to stop buying so much food. We knew of the joys of Bower Spinach (Tetragonia implexicoma), which we found in great plenty along the edges of the lagoon. 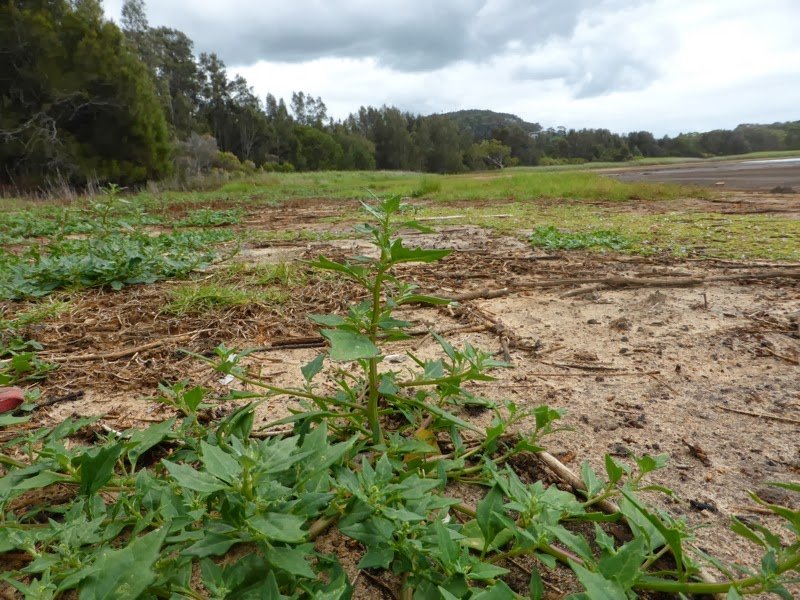 All we needed to complete our non– transported, packaged or farmed meal was to spear a fish large enough for dinner, 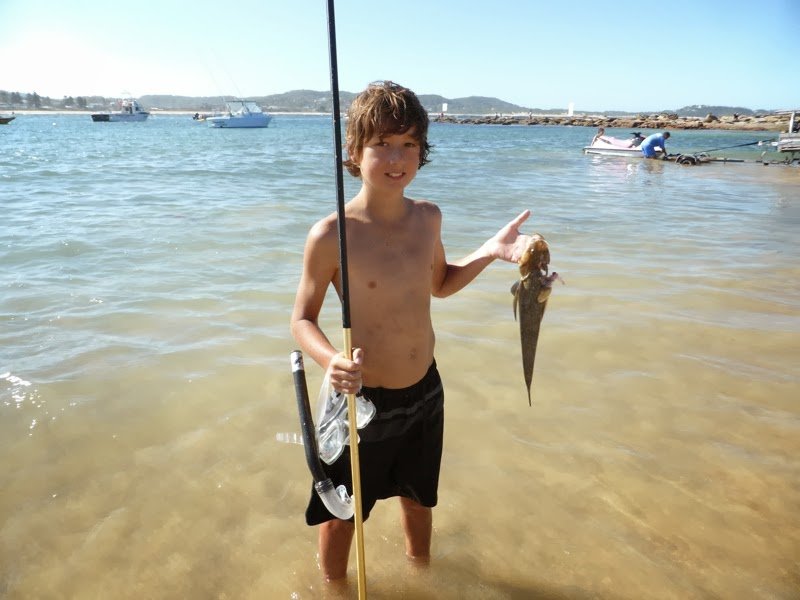 and to cook it up with garlic, lemon and the freshly picked bower spinach. In this case the fish we caught was a predator species called the dusky flathead (Platycephalus fuscus). While hunting fish we are both predator and prey. We saw large stingrays in the water and a grey nurse shark was reported nearby. 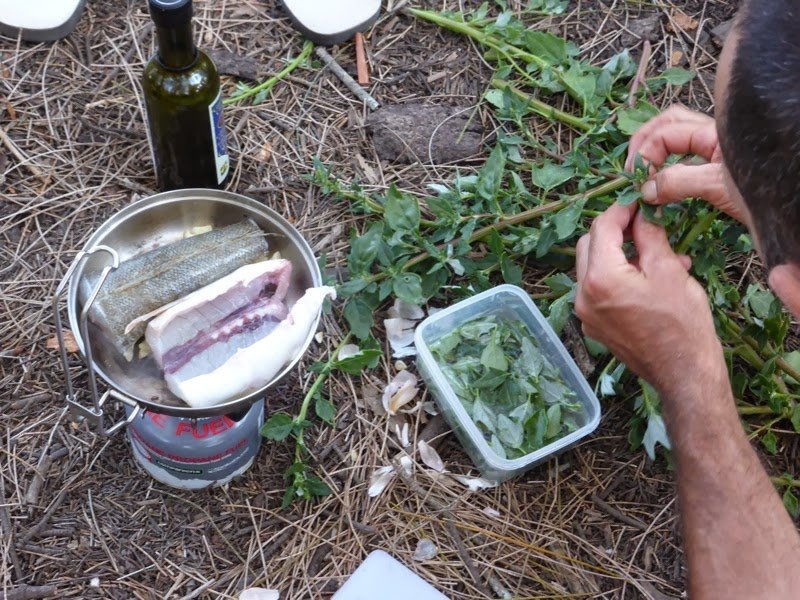 Living just doesn’t get anymore simple and pleasurable than this. 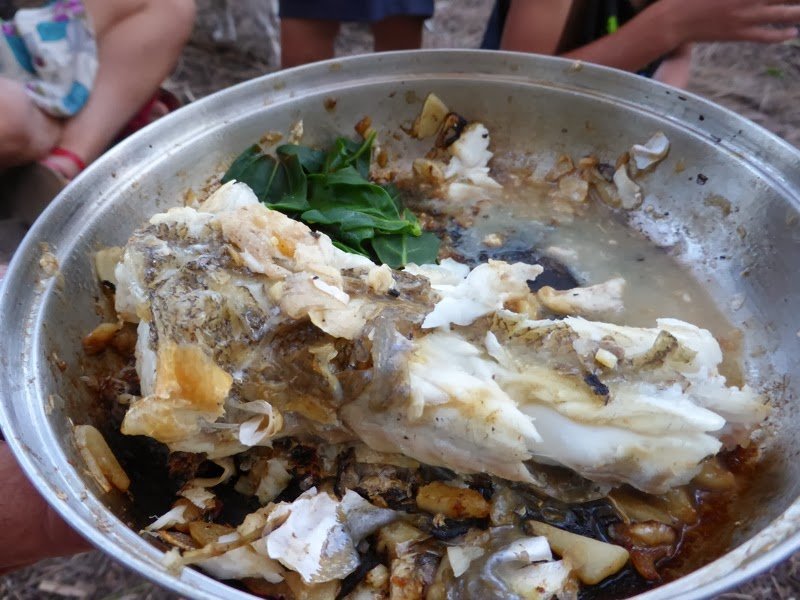 Thank you to all the wonderful people we have met, dined or camped with on this journey. You have enriched our travels infinitely.