Subscribe
On our second (and last) night in Violet Town we were treated to dinner by Denise, who we met at the VT Neighbourhood Centre. 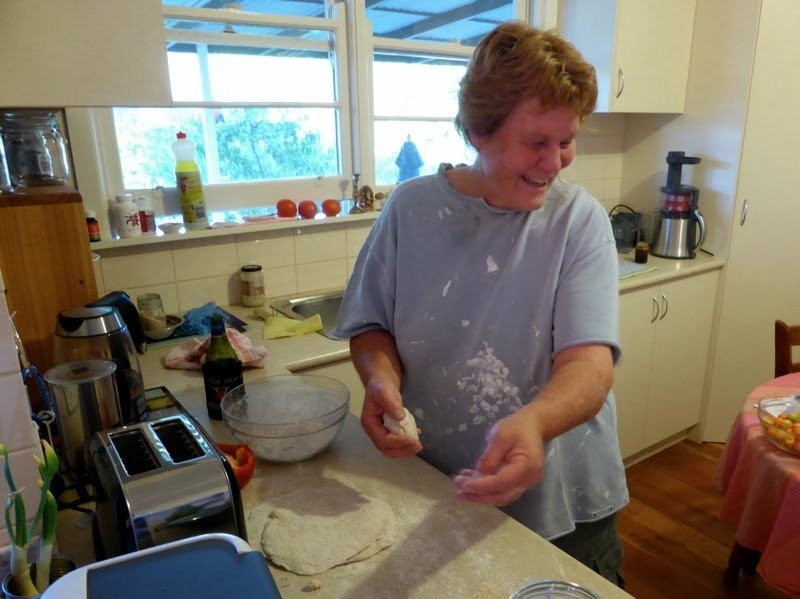 Denise cooked us a delicious Mexican bean dish served with flat bread and a salad from her garden before we swapped some tunes on her guitar. With Denise’s good company and generosity we beaned out of this happy town heading east again towards Benalla, leaving behind our best freeloading camping spot so far, along the Honeysuckle Creek. 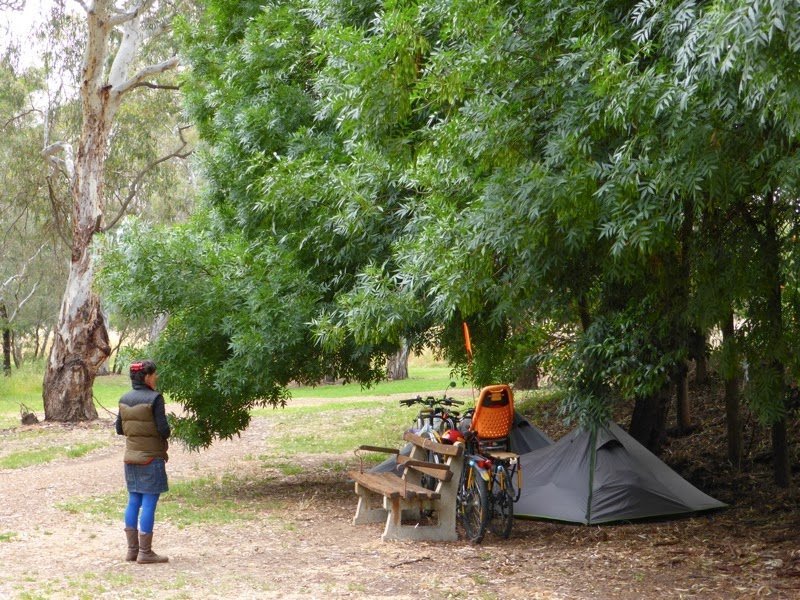 At Baddaginnie we spotted critter-like Bulrush flowers. Bulrush, or cumbungi (Typha spp.), was a useful traditional food. The outer rind was peeled off the underground stem and layed before the fire, the fibres were then twisted to loosen out the starch (Tim Low, 1988). The soft white starch of the young shoot can also be eaten raw and the left over fibres can be spun into tough string. The immature flower stalk can be woven into mats. (Survival.org) 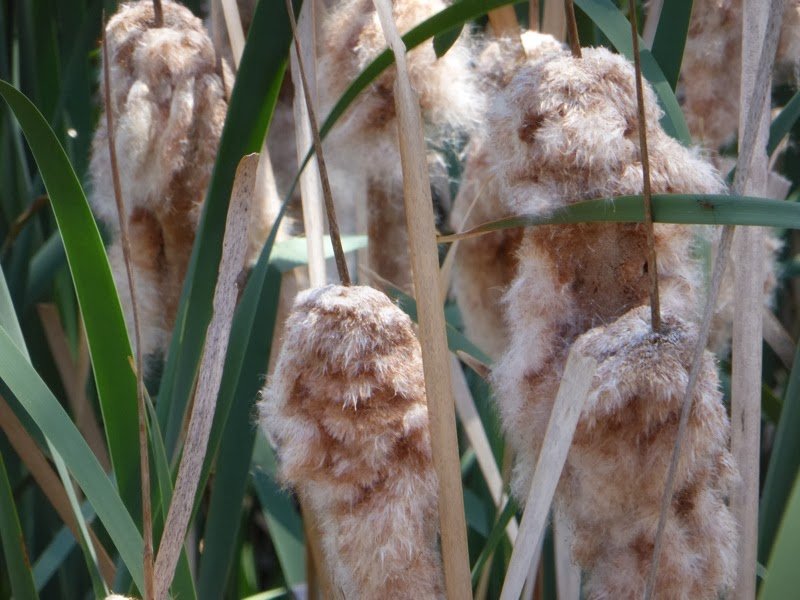 A little further on we spotted Salsify (Tragopogon) flowers that had gone to seed. There is so much naturalised free food (thistle roots, salsify tubers, wild lettuce) we’ve missed the chance to eat this season because they’ve already become too woody, and there’s so much naturalised free food (cherry plums, figs, nectarines, peaches, apples, walnuts) that just aren’t quite ready. 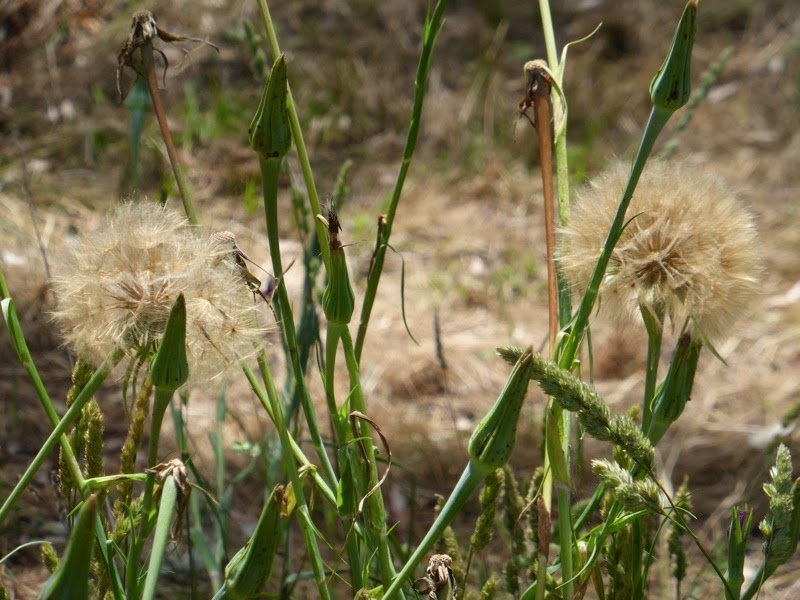 So we keep a look out for local produce to supplement what we find and what we have brought with us. 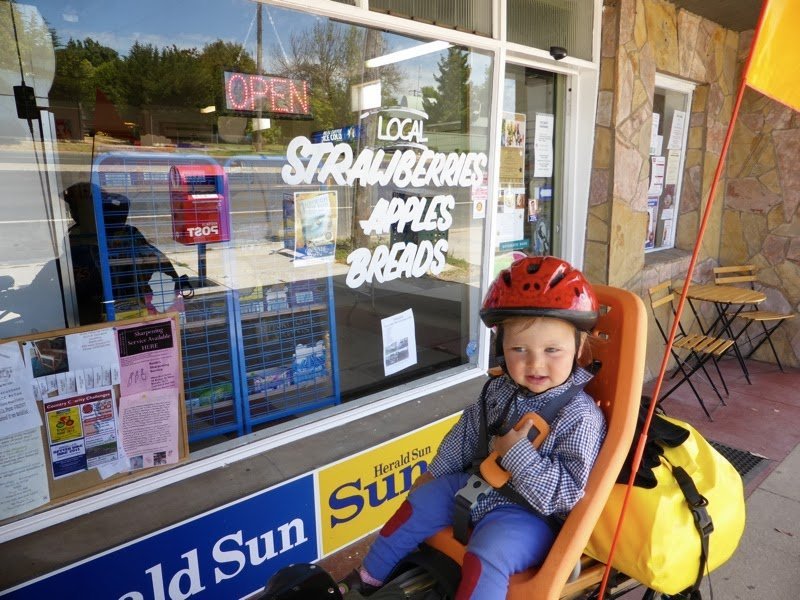 After a brief stop in Benalla we rode out into the heat of the afternoon to find a camping spot along Lake Mokoan. We are really starting to embrace the uncertainties of each day. Where are we going to camp? Who are we going to meet? Will there be drinking water? Will there be power? What will we find to eat? 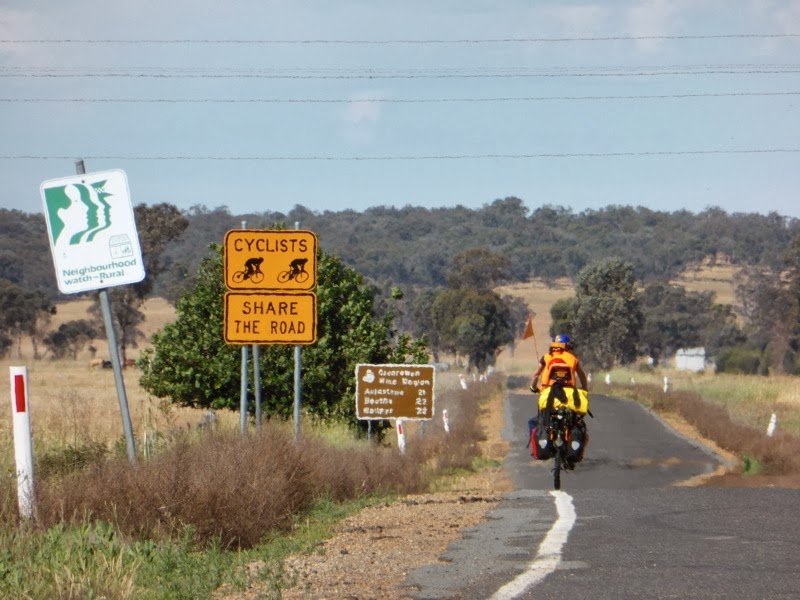 We arrive to find that the once man-made lake has been returned to a magnificant Yorta Yorta wetlands. It is brimming with more-than-human life, which must necessarily include death to keep things cycling. 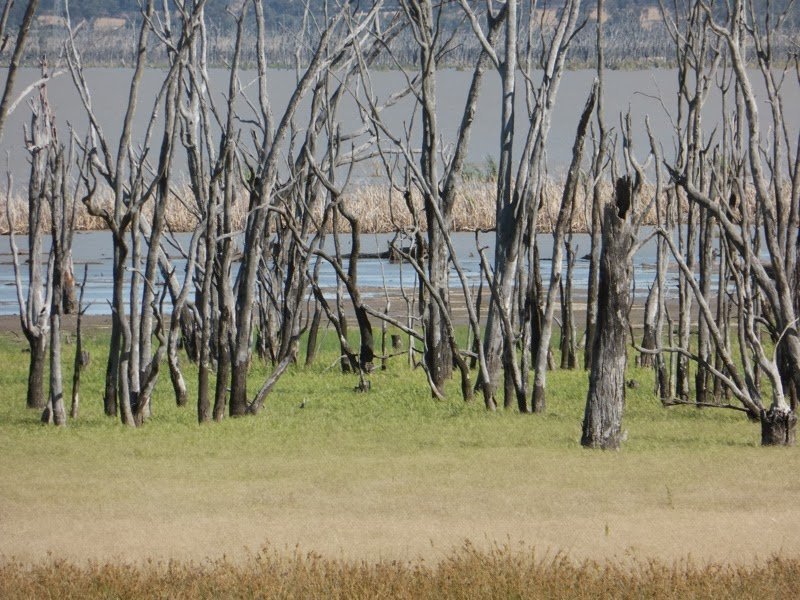 With the decommissioning of the lake the caravan park has seen better days. We were welcomed not by the manager but by permanent residents Gary and his grandson Josh, who brought over some beers while we set up camp. We’re starting to experience the incredible generosity of people and understand the importance of sharing stories while sharing common ground. 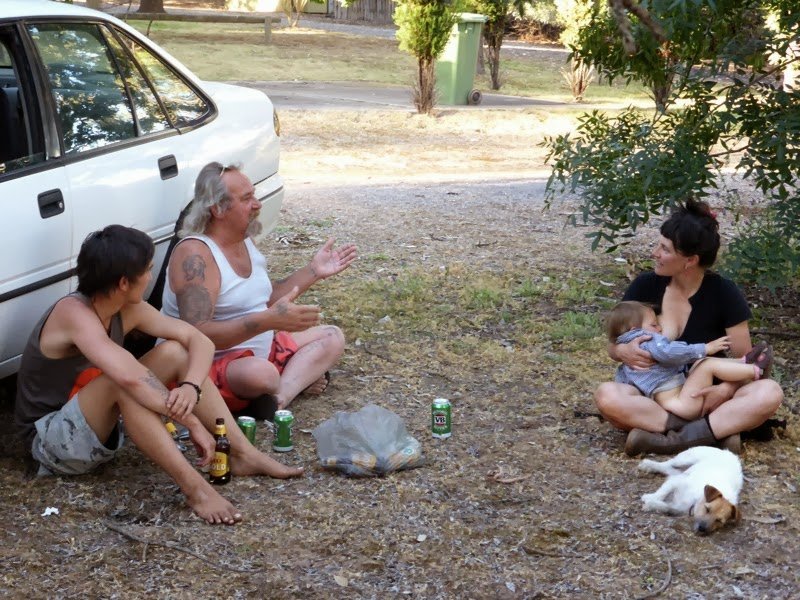 We are also discovering the different plant guilds that are forming in certain regions. At home, oaks, hawthorns, apples and blackberries have formed ecological partnerships with blackwood wattles, peppermints and messmates making habitat and food for numerous species. Here, in northern-central Victoria, we are finding that figs, walnuts and loquats are the naturalising trees. We are regularly seeing newcomer figs (Ficus carica) growing under heavy-drinking eucalptys, 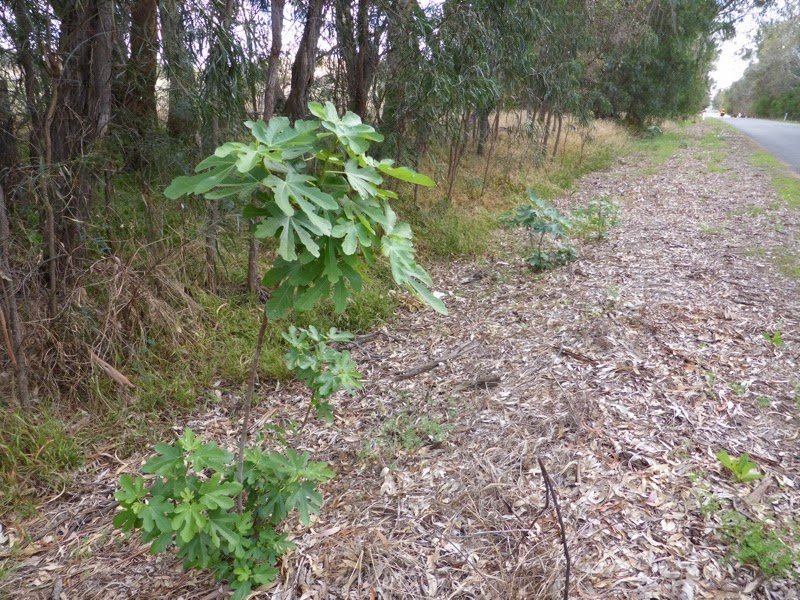 and loquats (Eriobotrya japonica) growing under nitrogen-capturing wattles. These newly naturalised, drought-hardy food species will be important to observe as the climate changes our growing regions and knowledge of local food becomes increasingly crucial to community health and survival. 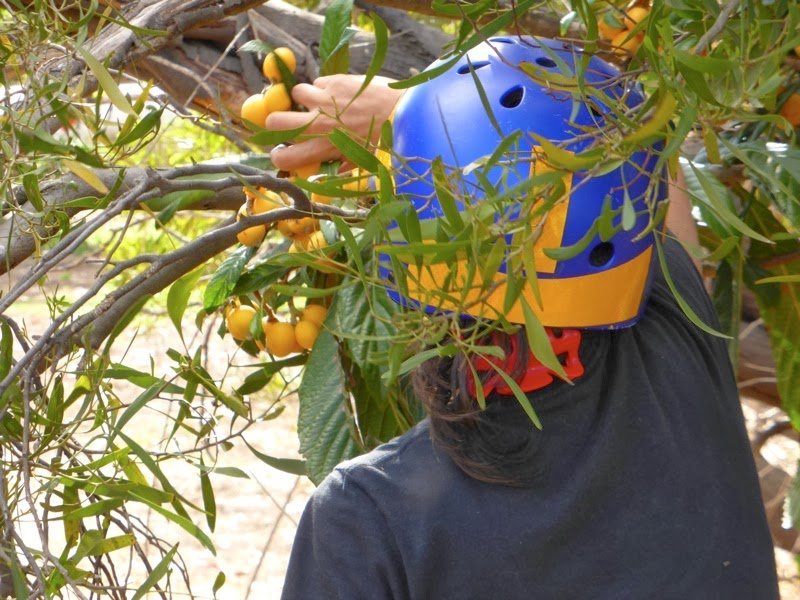 After a solid snooze (eaten in quantity, loquats have a gentle but noticeable sedative effect), some oats and juice and a bit of a wash, 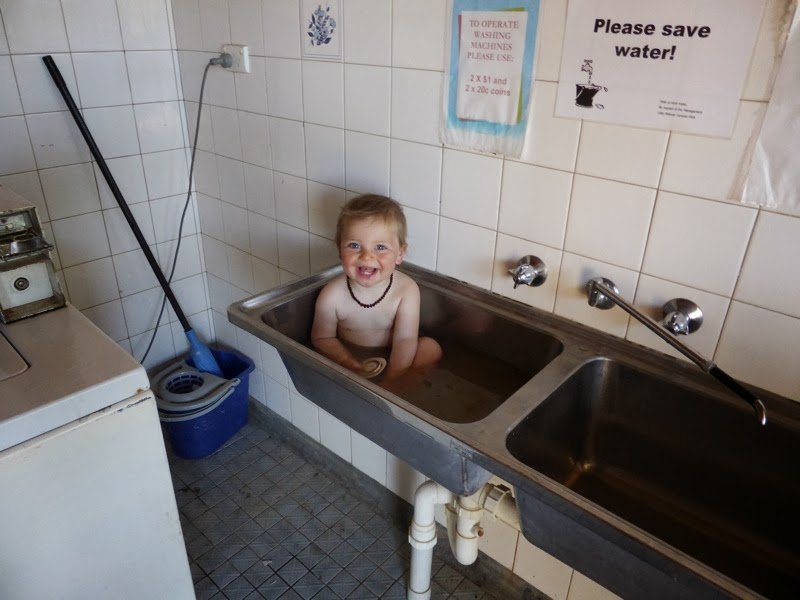 we left the wetlands and the caravan park and set out for Wangaratta, cycling through gangster territory, up into the infamous Warby Ranges where we discovered these Grass trees (Xanthorrhoea spp.). The seeds of these plants were ground as flour and the stem was used as a fire-stick for the ingenious fire-stick farming that was so common to Aboriginal land management practices. The resin was used to bond materials together such as stone spearheads to wooden shafts. 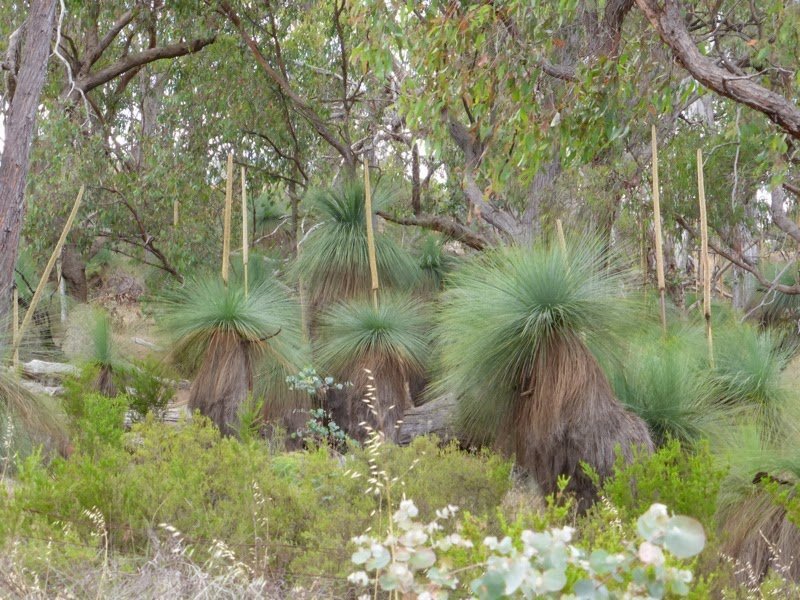 We recharged in Wang, 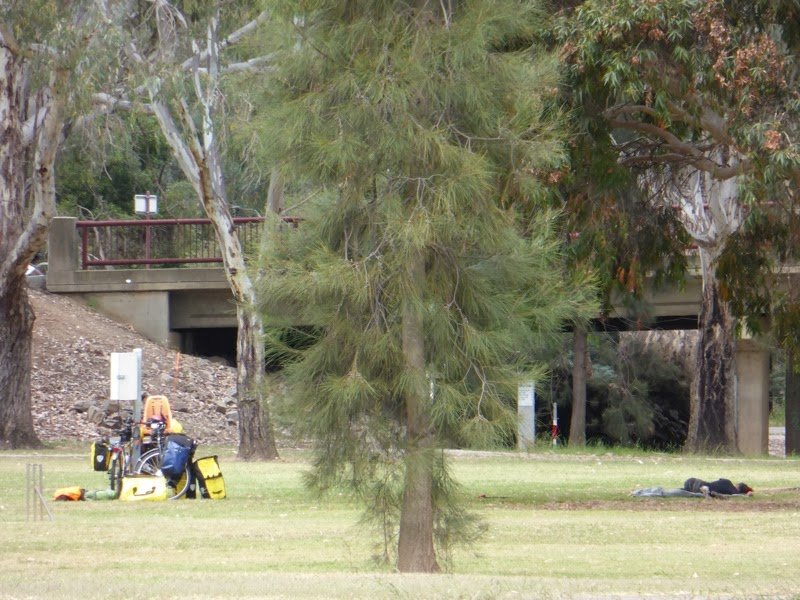 before setting off on the rail trail to Beechworth. 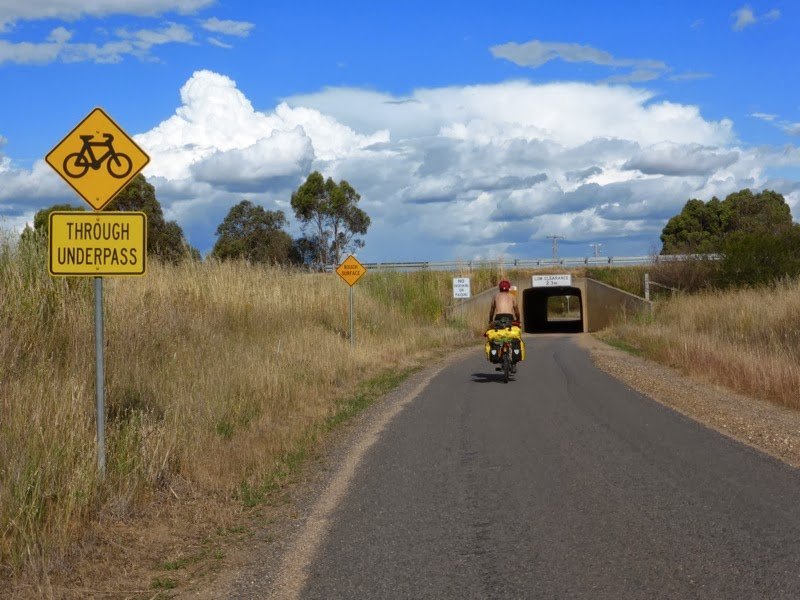 Not far along the trail we came across a splendid black mulberry (Morus) full of ripe fruit. 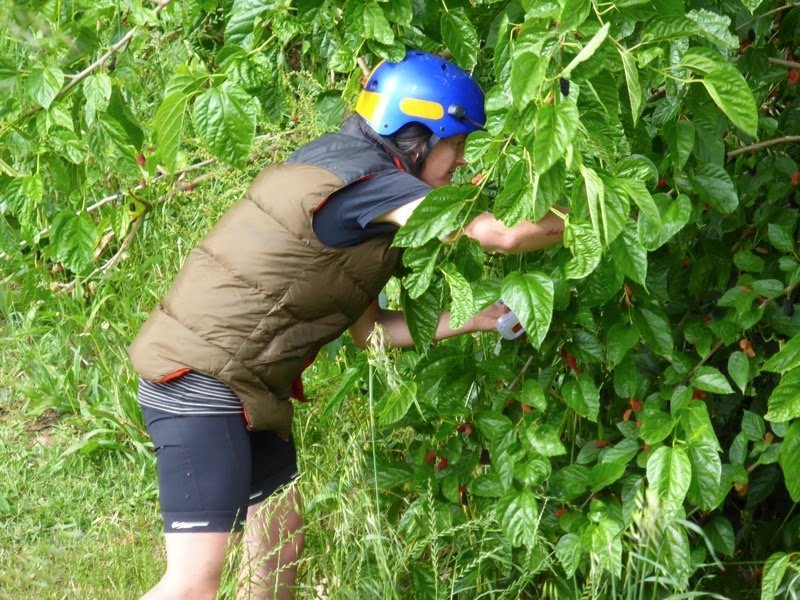 We are too early for some, too late for others, but just in time for this sweet delicacy rich in vitamins C and K, high in iron, and an anti-inflammatory and will lower blood pressure. Wow, all that free medicine. Who needs multinationals? 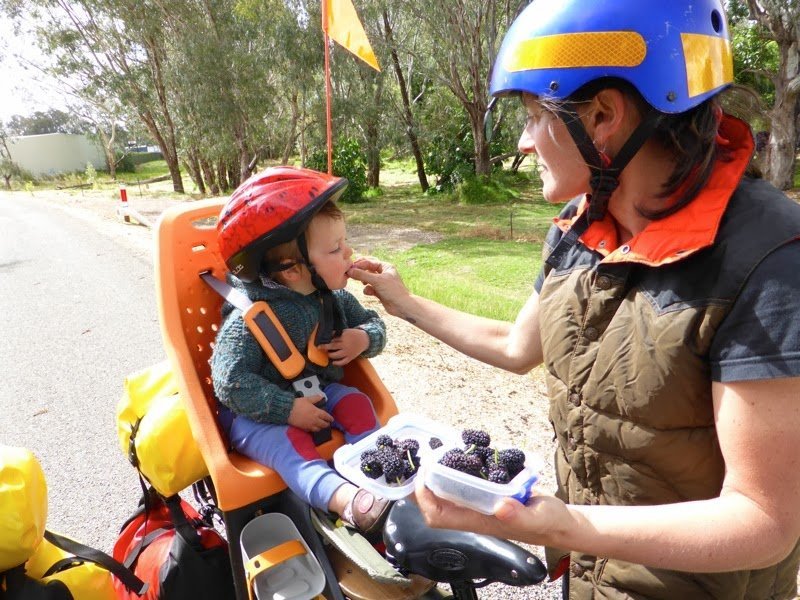 Social warming continues to play a big part of our travels. Being on bike and not windscreened off from the world enables plenty of opportunities to meet and sniff the locals. 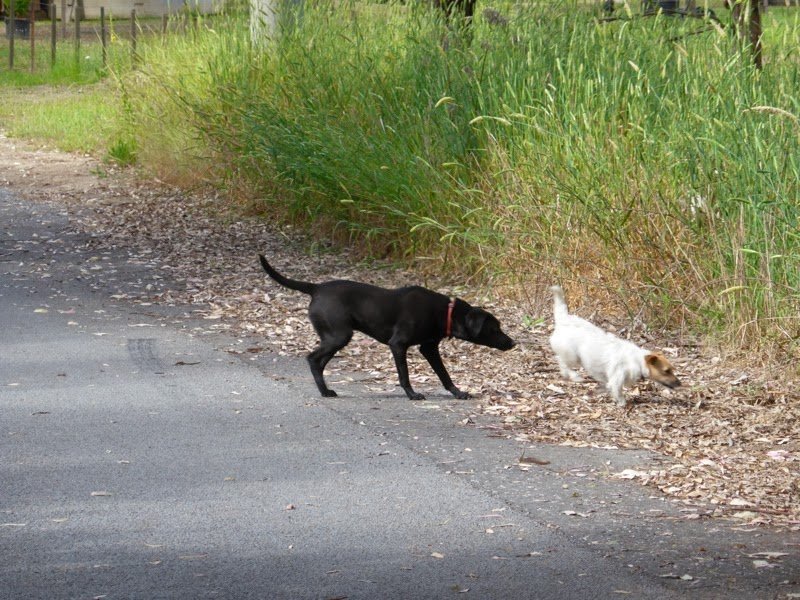 We’re having more opportunities to hunt too, though so far unsuccessfully. We’ve shot arrows at rabbits and have tried to spear trout in the shallow clear streams we pass. As eleven year old Zeph (who will join us shortly) reminds us by phone, ‘it takes time to learn what Aboriginal people know about getting bush food’. 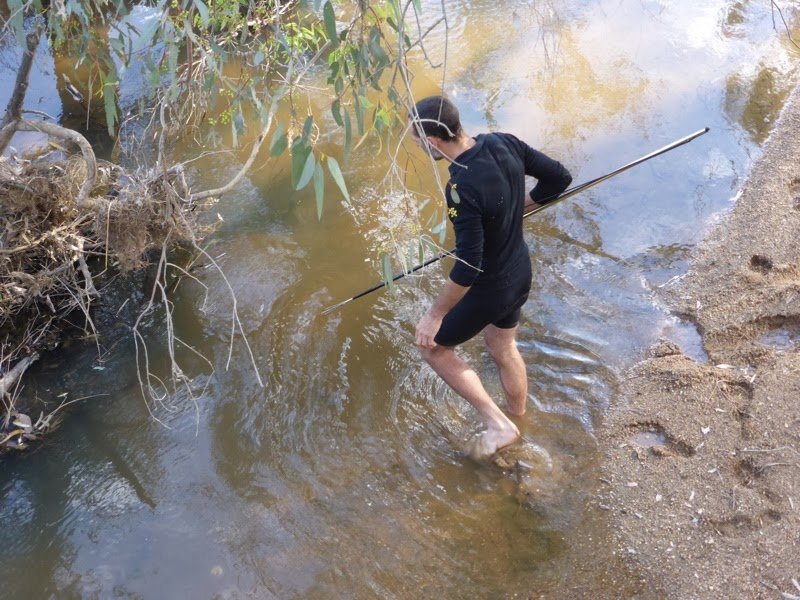 After a leisurely 27 km ride out of Wang we camped at the old Everton Station just 15 kms short of Beechworth. We had previously saved our municiple charge (we’re using our motors less and less) and a good night’s sleep (more loquats) for this last section of the trail, which we were warned was pretty steep. 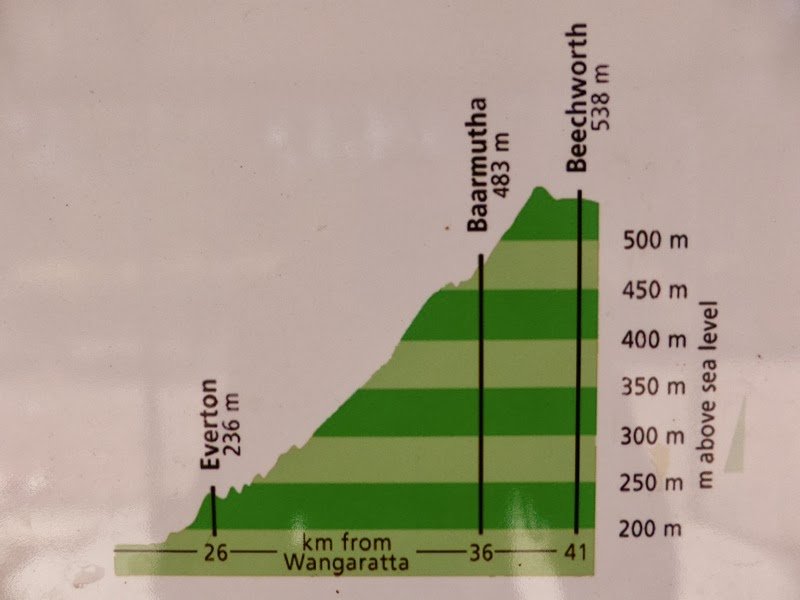 And arrived in Beechworth through a sustainable air-conditioning system, 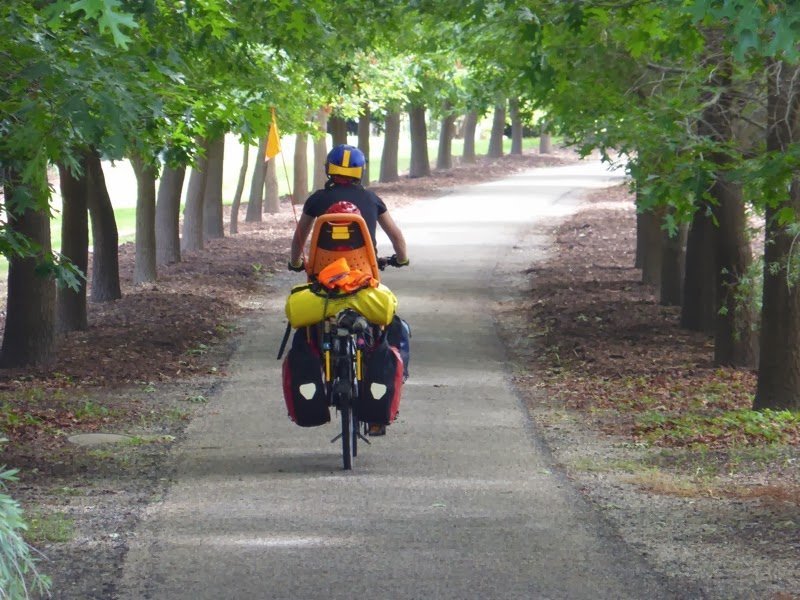 to find a free home for a few days along Spring Creek in the centre of town. 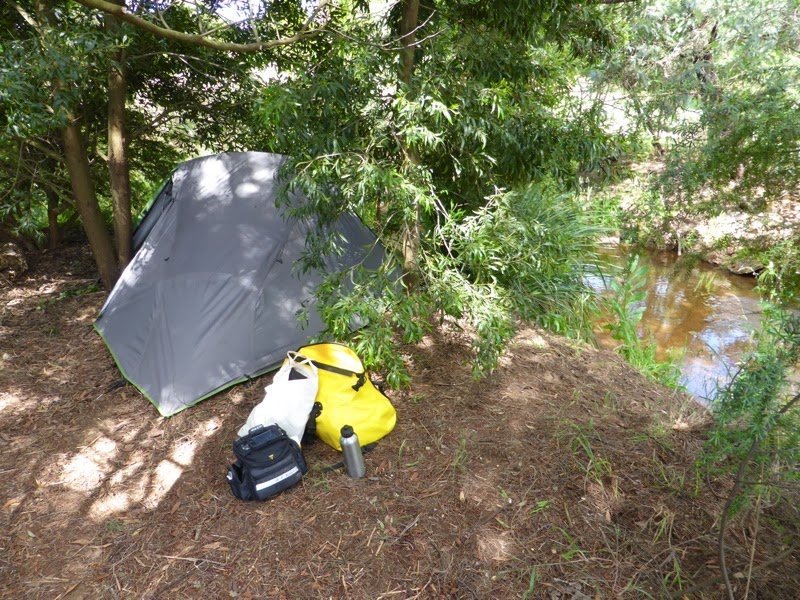 In the past ten days we have slow travelled from Jaara Jaara to Yorta Yorta country inspired by Indigenous patterns of existence and how we might recreate them in a post-oil, climate change world. 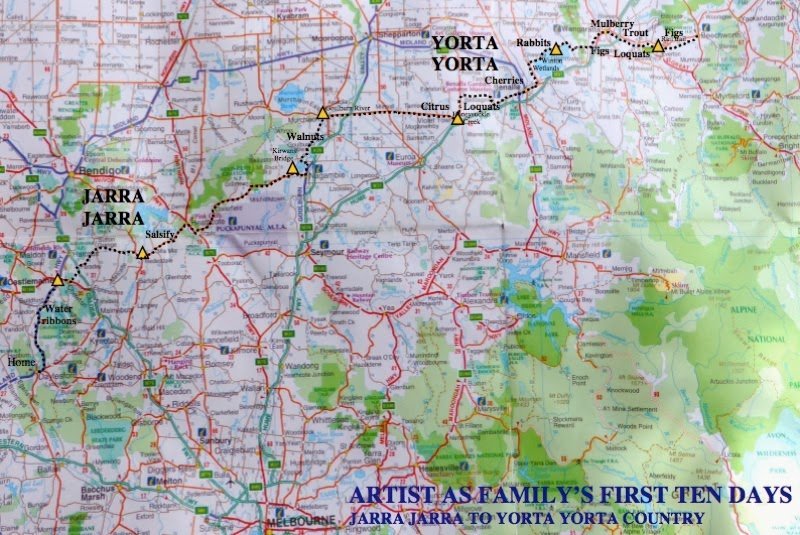 We hope you’ve had a good ride too.