Subscribe
We hung around Goulburn until the evening, cooked dinner in the town’s central park, 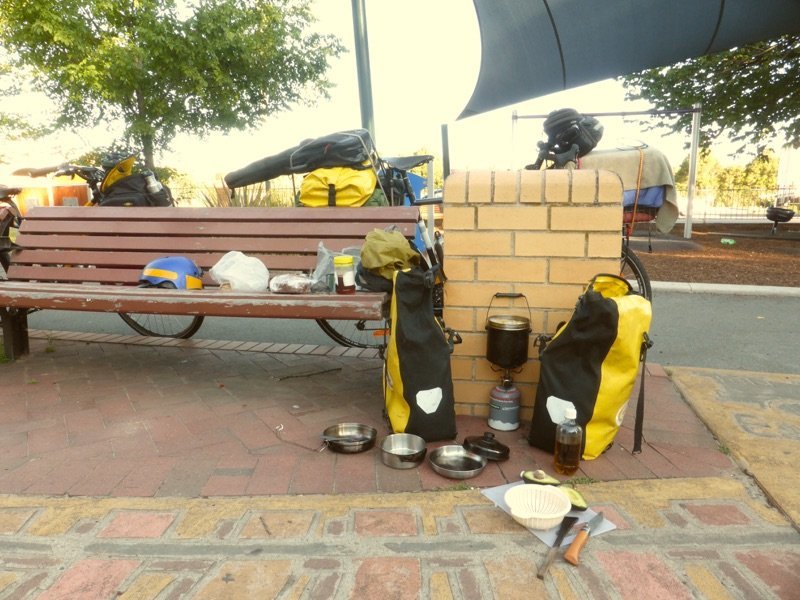 before boarding a quiet, off-peak metro train where our big bikes would be less in the way and Zero less likely to be discovered. Hello little patient dog under there. 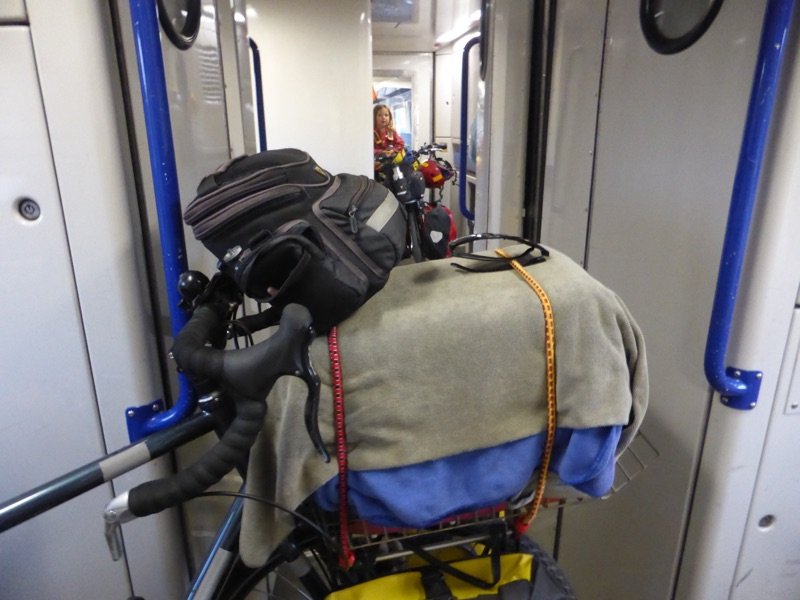 We haven’t been so hardcore on this book tour. If there’s the prospect of a day of riding beside heavy traffic and there’s a train line running near to our route, the train option has been fair game. While we climbed up to Marulan, Meg fed Woody by standing on her helmet. He was dead tired. So were we. 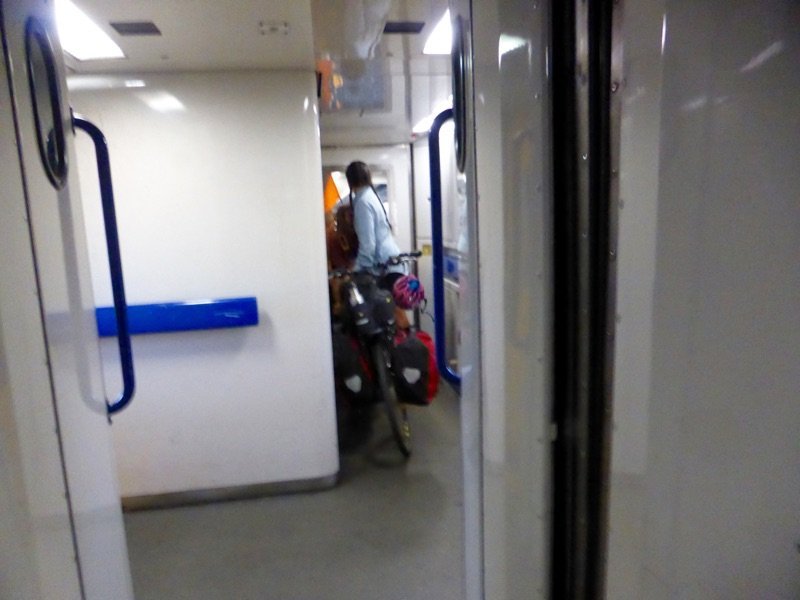 We arrived in Bundanoon and made camp in the dark, waking to this little idyllic park environment. Oh sleep, you magical medicine. 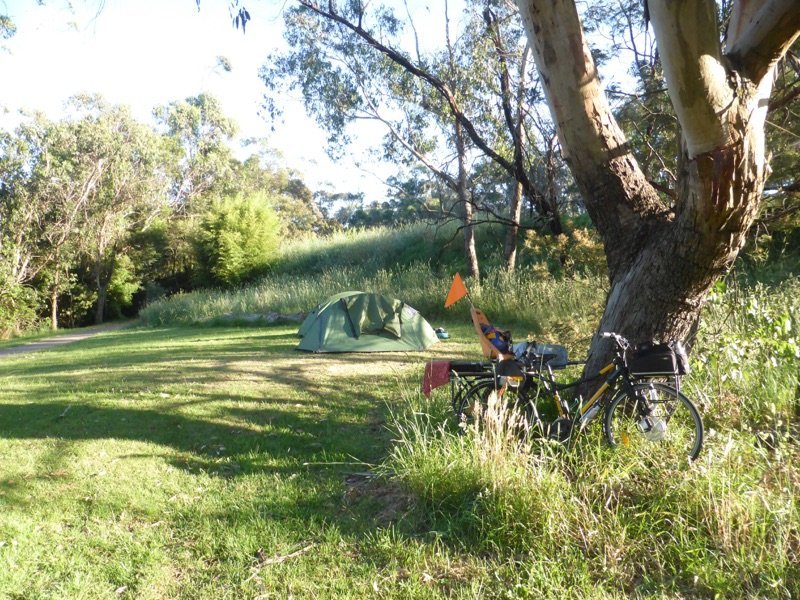 We headed to our favourite Bundanoon bike cafe, 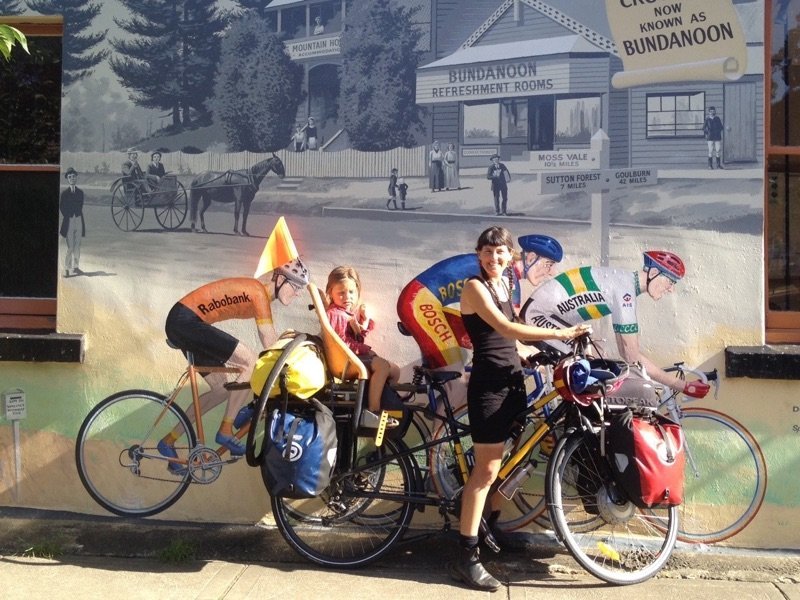 and after reaquainting ourselves with the friendly crew there, Woody found a little scooter, dumped in some bushes. We got to work to make it a going concern again. 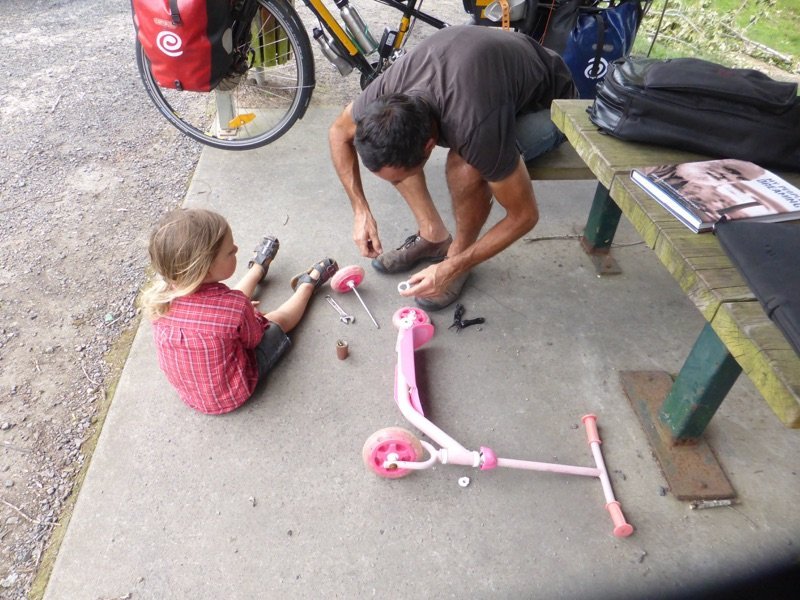 Not surprising, wheels have always fascinated our youngest, as they have our eldest. Back at home Zeph has become a madkeen downhill mountain biker and stunt dude. 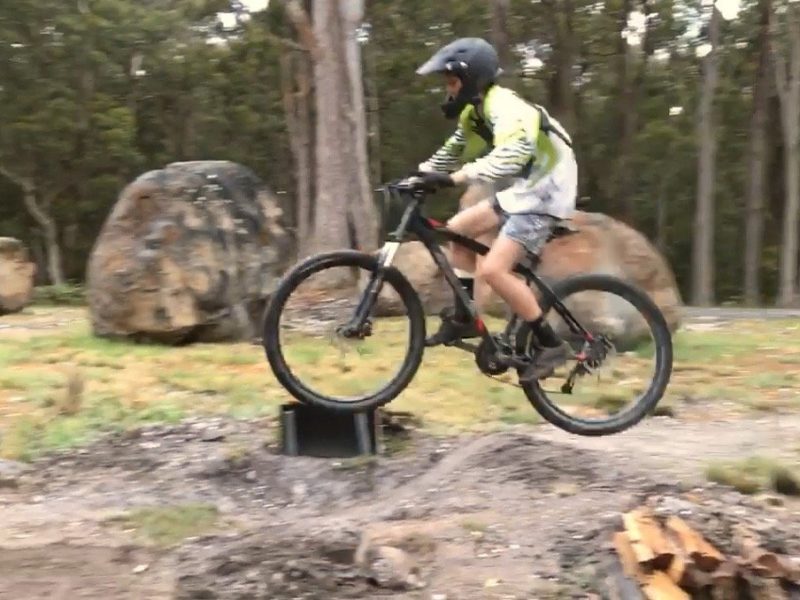 Patrick’s brother, Sam, rode out to Bundanoon to meet us and we all rode into Moss Vale and unpacked our gear before the afternoon book event at The Moose Hub in Bowral. Our talk there was part of the Southern Highlands Green Drinks, where various different green groups merge once a month and share their different projects and approaches. Thanks for snapping some shots Uncle Sam! 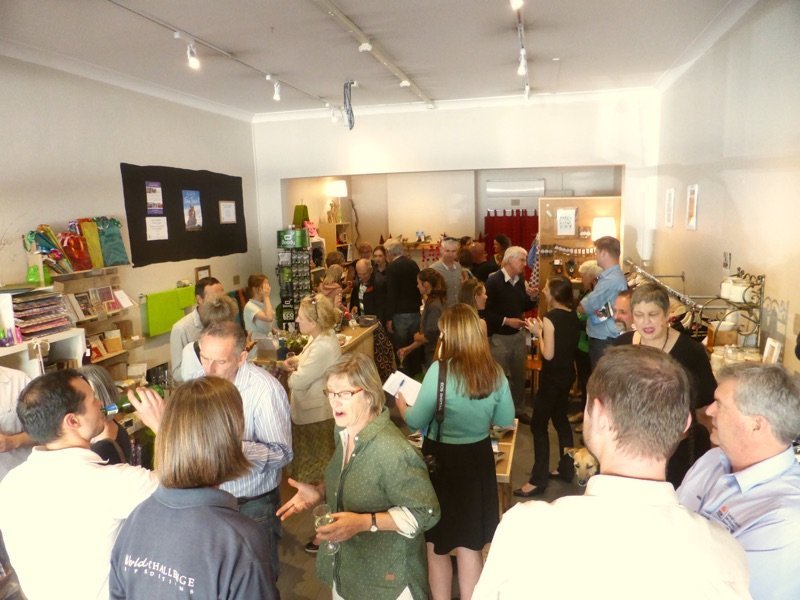 Woody thought all his Chanukahs had come at once when our delightful host Nicole brought out the fruit spread. Thanks Nicole! 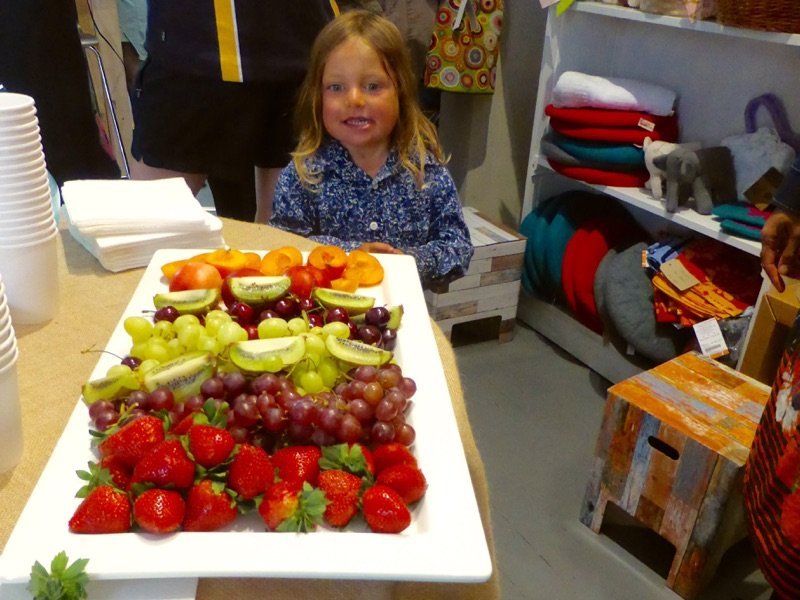 It was a short visit to the Southern Highlands. We had a full plate of things in Sydney to get to, including guerilla camping at a fine little harbour free camp (surrounded by billion dollar dog box apartments and poisoned harbour fish), picnicing with the Milkwood crew and their lovely garden produce which included fennel root, carrots, zuccinini, saw-leaf corriander, parsley, basil and capsicum all wrapped up in reusable beeswax cloths, 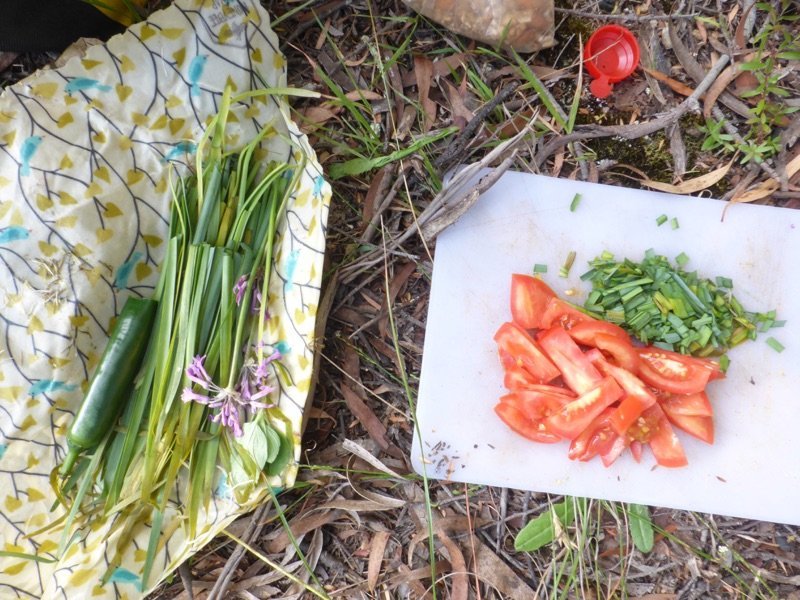 and visiting Lucas, John and Diego at Big Fag Press. 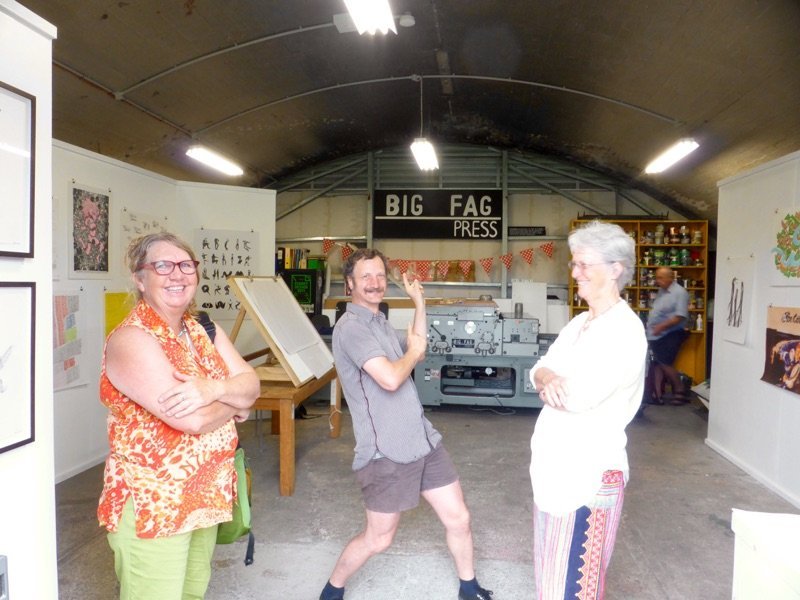 Diego Bonetto is a consumate communicator. Above he is showing off the Big Fag printing press to some local punters, below he sings the virtues of the plants that plant themselves. 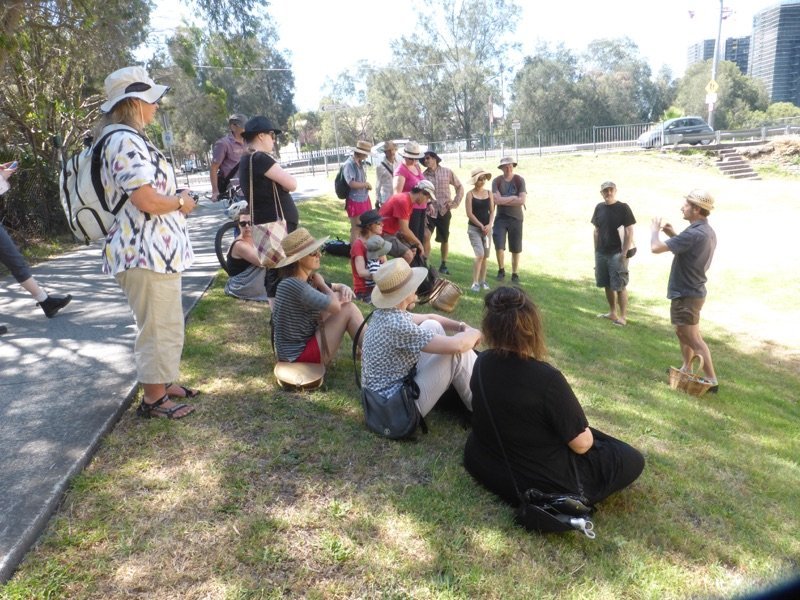 Diego invited us to collaborate on a walk with him, and about 20 kindred spirits joined us along the Cooks River. 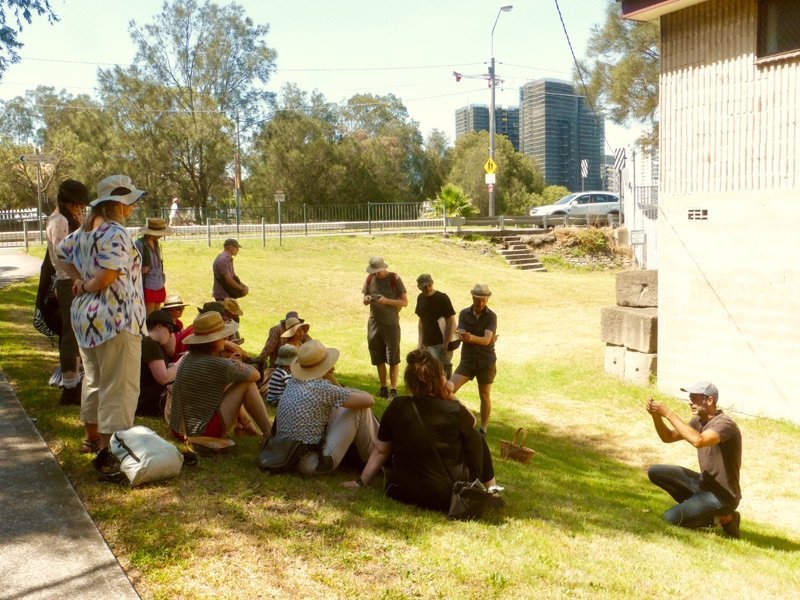 Wow, it still amazes us how much food can be found growing on a municiple lawn. After we finished our walk and cooked up a weedy horta dish for everyone to try, a group of landcare volunteers come in with plastic bags and trampled all over the precious sandstone ecology pulling out weeds. It was a remarkable spectacle of nativist ideology in action where an environment is stripped of the plants holding soil and sand from ending up as sediment pollution in the river. 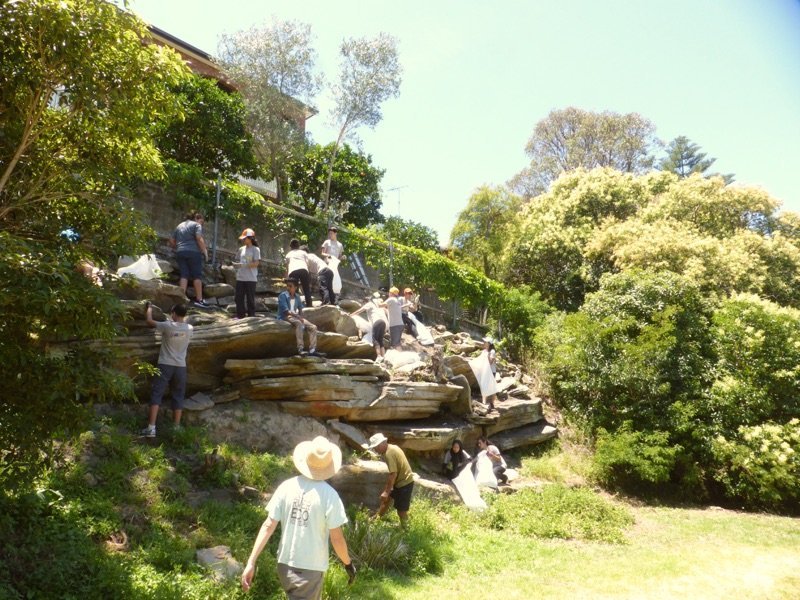 We left this tragic expression of eco-purity and rode on a little further to hook up with the Bicycle Garden: a group of volunteers that regularly sets up a pop-up bicycle repair station in public areas to teach people to fix their own bikes. What an awesome social collective! We had lunch with these generous and knowledgeable folk, 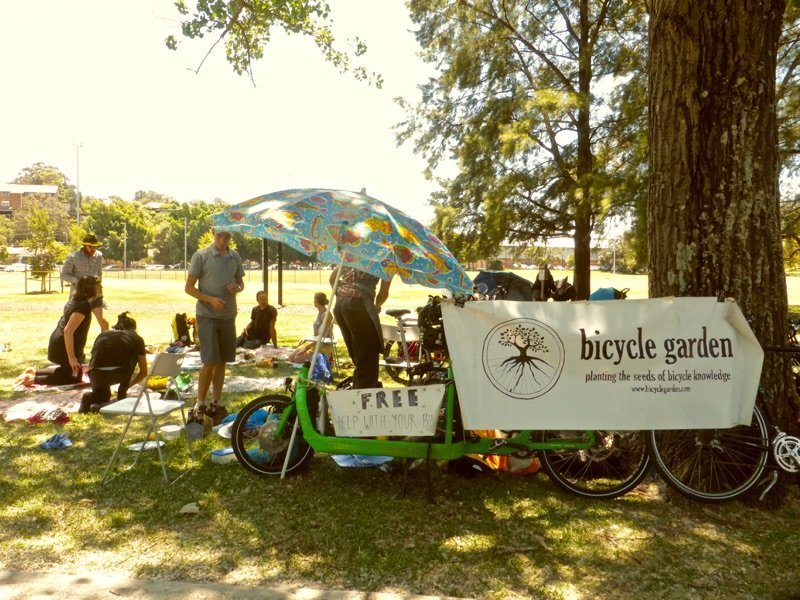 before heading to SNO where Patrick spoke about his and Artist as Family‘s practice of permapoesis.

Then it was TV time. So many diverse communities. We were lightly powdered and went on the record at Channel 9 and Channel 7. We had to be on set at the Today Show at 7am, luckily Patrick’s sister Hen and her family live just around the corner making our early morning tent pack-up and ride a breeze. Thanks Hen and Ant and girls! 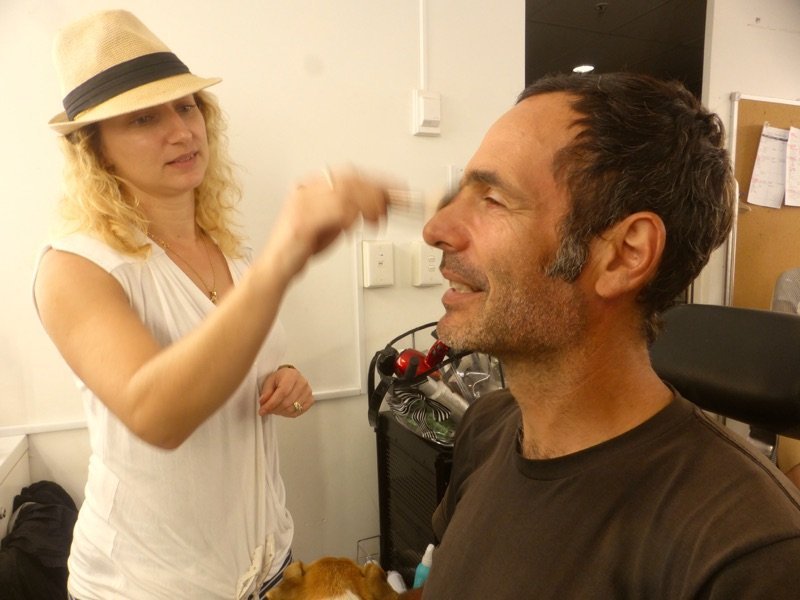 Our Sydney book event occurred at the delightful Florilegium book shop, owned and operated by the charming plant lover Gil, who generously loaded us up with books after our talk, read and Q&A. 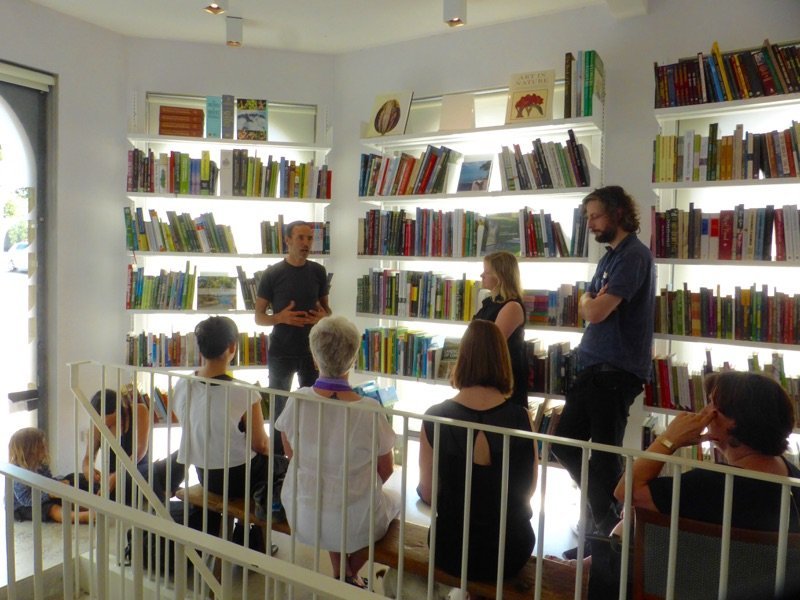 It was a media circus in Sydney. An excerpt from one of Meg’s chapters was published in the summer issue of Slow Magazine. The theme for this bumper issue is resilience. 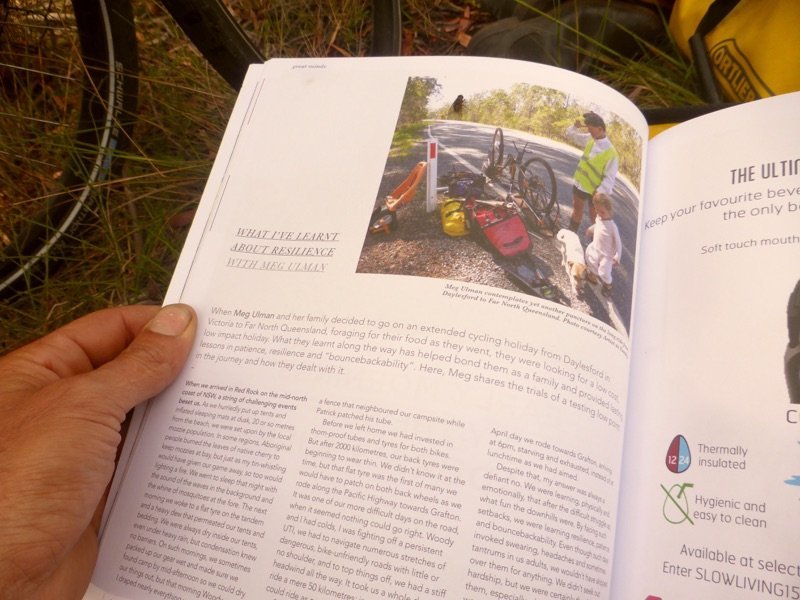 After Sydney it was rest we needed to pursue, so we hopped a train to Katoomba and headed for our infamous camp site where on the last trip we were visited by the Federal Police. The story appears in The Art of Free Travel. 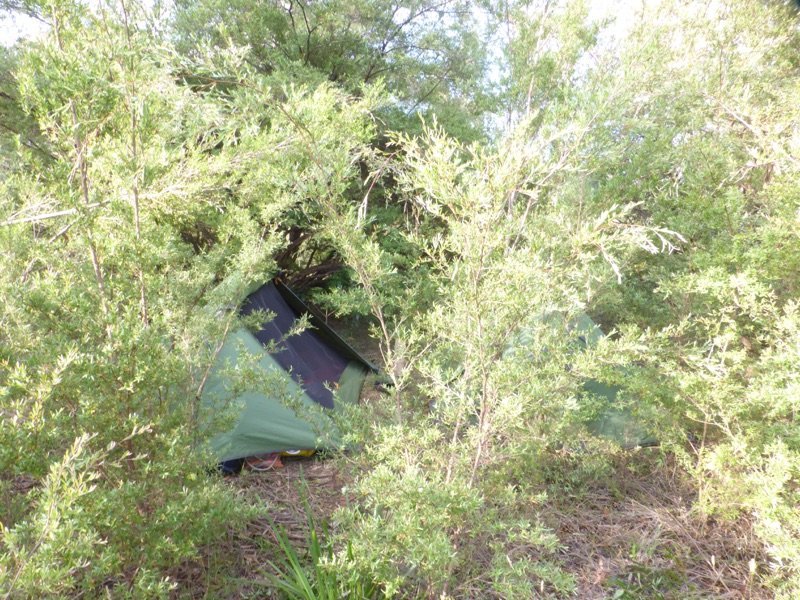 Just a wee walk down from the camp is this little hidden billabong, a source of great pleasure and restoration. 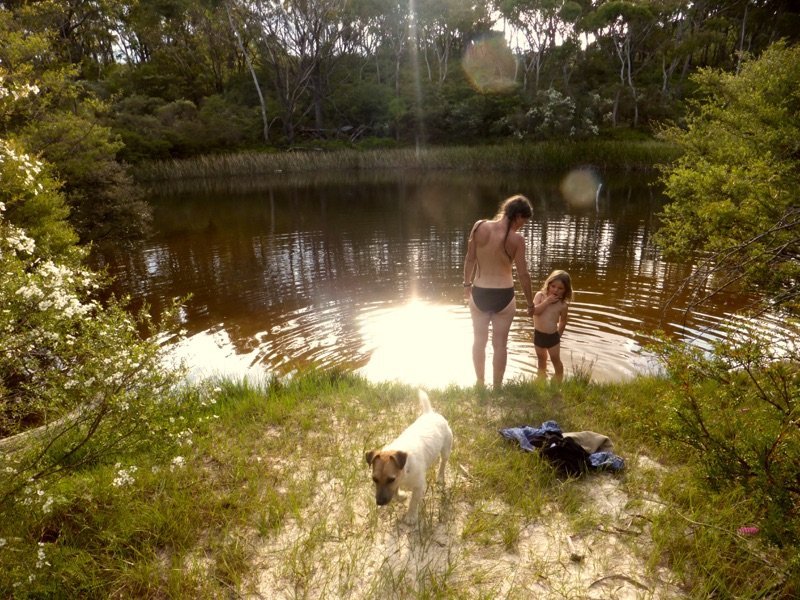 This afternoon we speak at Gleebooks in Blackheath and then more rest and riding and visiting old and new friends until the new year and we point our two-wheeled caravans south and coastal. We wish you much rest in the coming weeks, Dear Reader, whether you’re a hillbilly, city-dweller, coast rider or other.

We stopped in Calliope to look at a local bat population when Nicky Moffat, a young Gladstone Observer journalist, pulled over and asked what we were up to. This is her/our story: 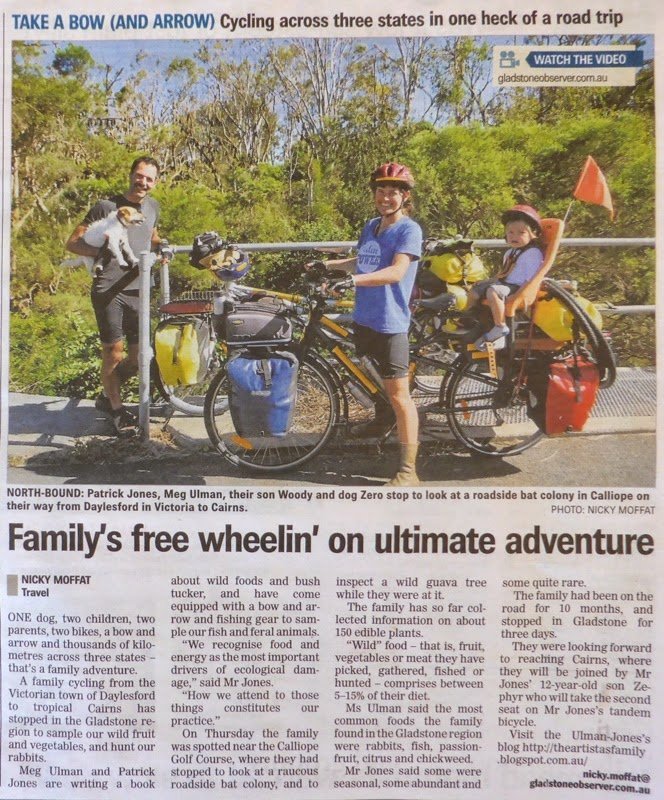 A little while ago Greg Foyster wrote a story on our food-cycling expedition and published it in Slow Magazine. No online version is available, but the magazine can be found fairly easily in Australian newsagencies.
And back a few months NSW’s Youth Action invited Zeph to tell our story from his perspective in their online rag unleash magazine. What resulted is Zeph’s first published article. Go Zeph! 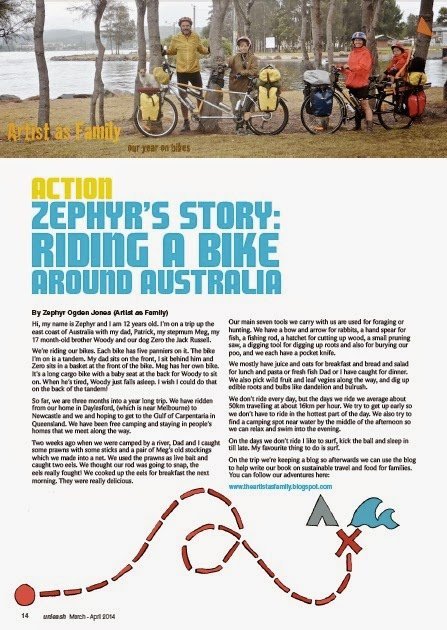 Read the whole unleash issue. Zeph’s article can be found on page 14 of the PDF.