Subscribe
Having set up the tents and locked up the bikes we have walked into town to see what purchasable foods are on offer. Towns like Wallacia, we’re discovering, generally sell all kinds of the wrong sort of things. It is another hot day and the traffic tries to outcompete the male cicadas, whose shrill cacophony reaches fever pitch in the heat of the day. We walk back to our river hideaway with unloved bread, oats, juice and some tinned corn to help tempt fish onto the end of our line. We dwell on the magic of free camping, little or no amenities, just tree shade and river water and a nearby tap for drinking. We swim in the lovely cool water and some who come down to fish tell us they are horrified we are swimming in that dirty muck. 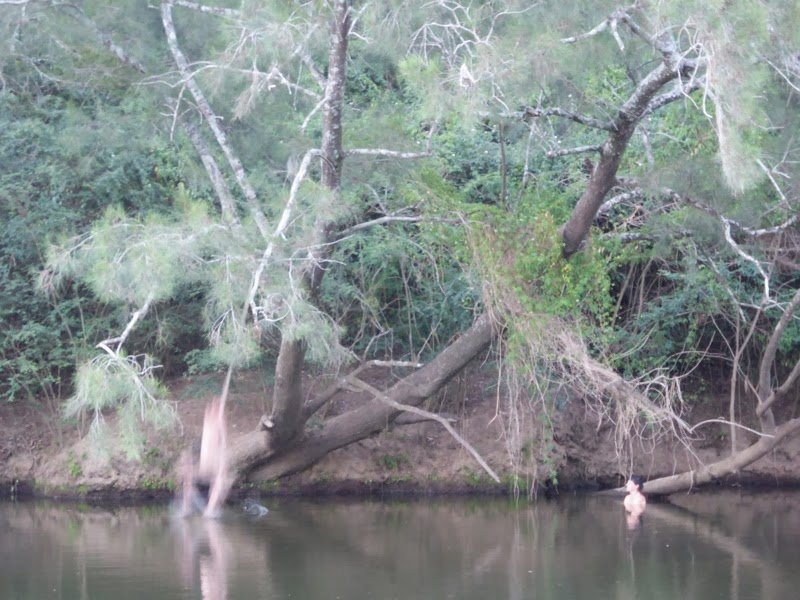 As we travel from state to state we’re finding many Australians are frightened by unsterilised environments and approach such autonomous places with contempt and dread. If we reply to such a phobia at all it is with something along the lines of: fish guts and duck poo are prefered friends over a cocktail of municiple-sanctioned corporate chemicals, or maybe something a little less wordy. We rarely if ever get sick. In fact it seems that the rougher we live the healthier we feel, provided we are eating well. Up in town we saw visions and heard stories of unwellness and hospitalisation, my father’s gone back in for treatment, the cancer has come back, said one obese woman. What sort of society allows foods that make people so unwell? While we’ll occasionally indulge in hot chips and industrial bread if there is nothing else, there is no better antidote to such impoverishment than the autonomous foods we are finding along the way. Foods such as blackberries (Rubus), 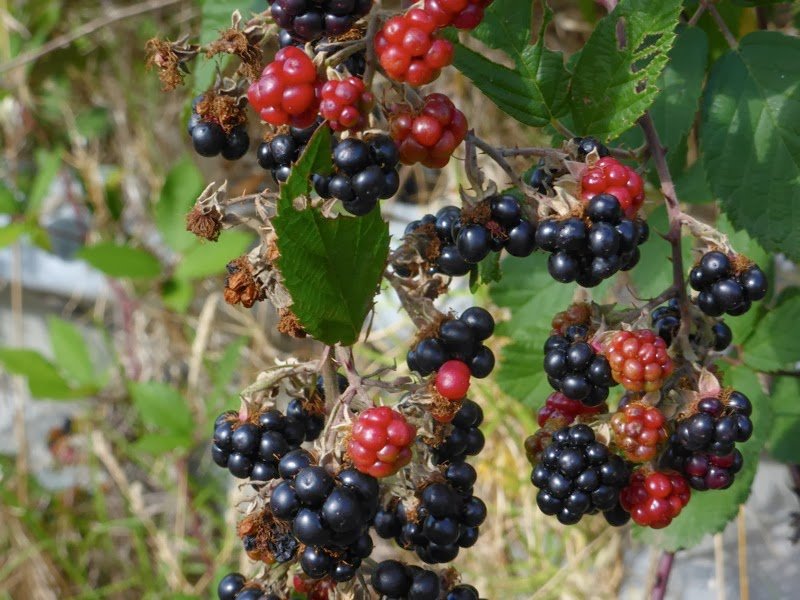 which, like plums, apples, spinach and grapes don’t need ad men to persuade us to eat them and are unparalelled sources of bioflavonoids and rich in Vitamin C. Like raspberry leaves, blackberry leaves make a great bush tea and are high in iron, magnesium, potassium and B-vitamins. Of course, we have to be careful with these generous autonomous foods because they too are often treated by councils on ideological grounds, which big chemical companies profit from. We always check the leaves and surrounding vegetation first to ensure they haven’t been sprayed. Straight off the plant there is nothing quite like this free, sweet medicinal treat. Well, perhaps except for this gorgeous plant. 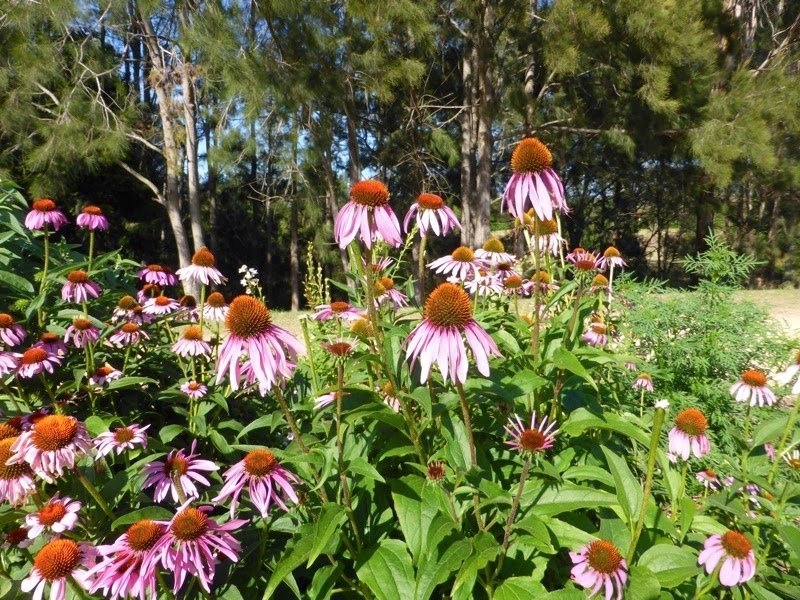 Echinacea (Asteraceae), according to Medical News Today, is used to treat acid indigestion, chronic fatigue syndrome, diphtheria, dizziness, genital herpes, gum disease, malaria, migraines, pain, snake bites, rheumatism, septicemia and bloodstream infections, streptococcus infections, syphilis, the flu, tonsillitis, typhoid, urinary tract infections and vaginal yeast infections. We simply dry the flower heads and make a restorative tea with them. Although various university conducted studies have found varying results regarding the benefits of Echinacea, most likely none of them observe what other foods are being used in combination. If you try to throw in a delicate plant medicine on top of a diet of industrialised food the results will most likely be poor. Similarly, finding the right place to camp means getting proper rest from the intensity of bike touring, which is another type of medicine based on our wits not our wallets. On leaving Moss Vale, following the awesome bike track along the Wingecarribee River to Burradoo where the autonomous roadside apples were almost ripe to pluck, 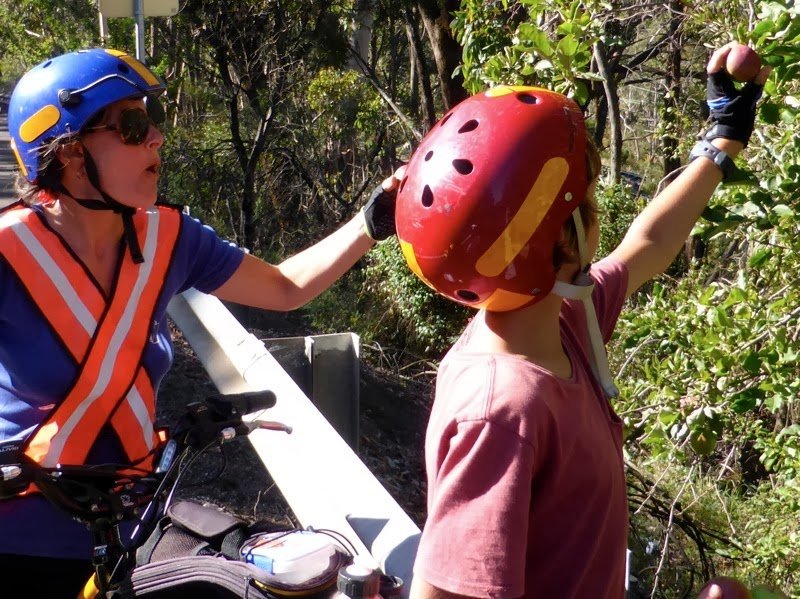 we joined a continuous stream of bike-unfriendly traffic from Bowral to Mittagong before we were able to relax in apple orchard country at Yerrinbool and join the Old Hume Highway. This was the first bike touring leg of our trip that included Zeph, who came to join us in Moss Vale at Xmas. So with our full tribe of five beings on two bikes, we set off for Thirlmere Lakes National Park, 52 km away. 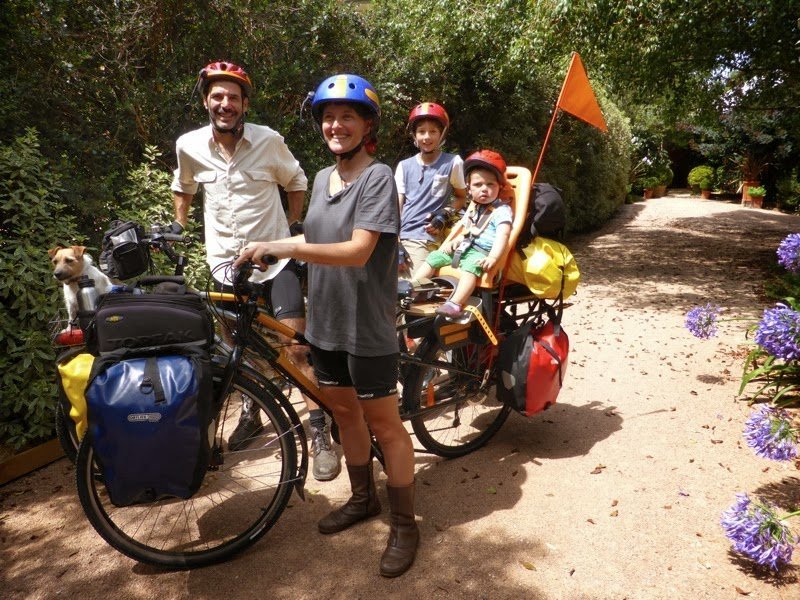 In order to have the freedom to live well and experience the profound fullness of this country we are having to write our own laws, which we believe are closer to Aboriginal sensibilities than European legalities. There are notices and rules everywhere, no doubt made for a growing number of dickheads that refuse to respect the land and its diverse critters and ecologies. Thirlmere Lakes does not accept dogs, camping, people after dark and in some places even the innocent bicycle is banned. With only our bikes to hide from rangers in the bracken understory we set up camp as the mozzies descended. 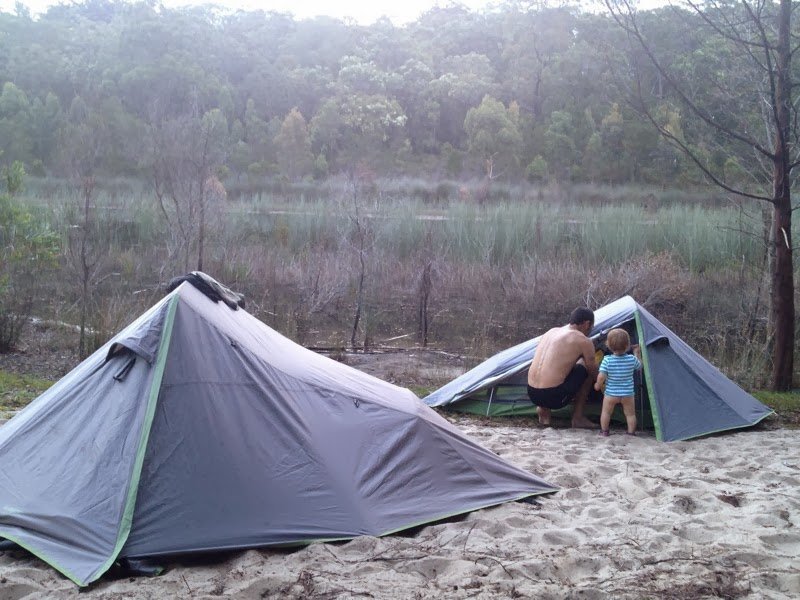 While in the park we kept Zero on a lead, not because his poo is polluting (he doesn’t eat canned or commercial dog biscuits and we bury all his organic wastes, and ours for that matter), but because there are signs around the park telling us 1080 poison bait has been put about. Zero may chase away but never catches birds such as this swamp hen perching out of harm’s way, 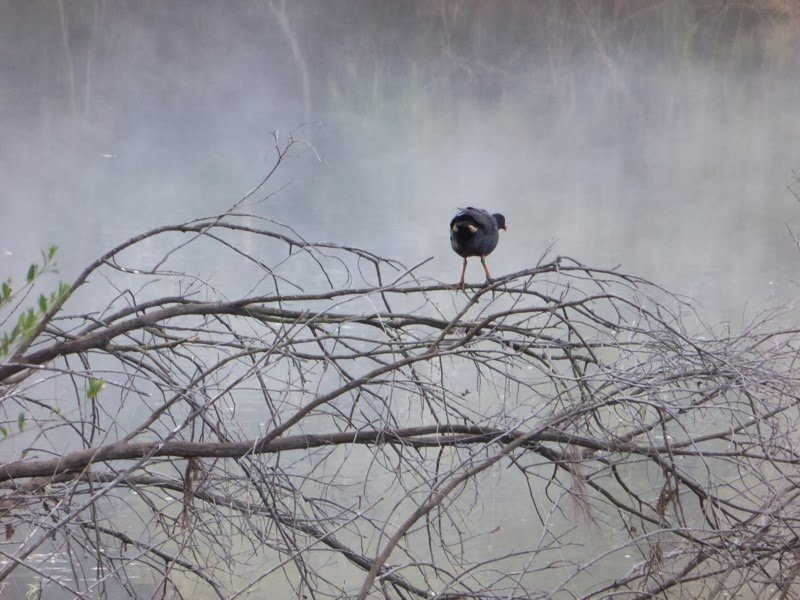 Rabbits are Zero’s preferred game, although he’s not much good at hunting them. So, in such a location, we devise that his potential to negatively impact the ecology is extremely low. Three thoughts emerged while we were at Thirlmere Lakes. Firstly, there should be exemptions for walkers and cyclists who wish to camp in all National Parks. There must be rewards for those who travel lightly in this day and age. Secondly, the use of 1080 is the very opposite of an environmental solution because the entire food chain is affected, not just the feral predators at the top. Once again governments are giving damaging chemical companies power by buying these non-solutions. Thirdly, it is not littering, we reflected as we picked up other peoples’ rubbish in the park or came across dumped waste, 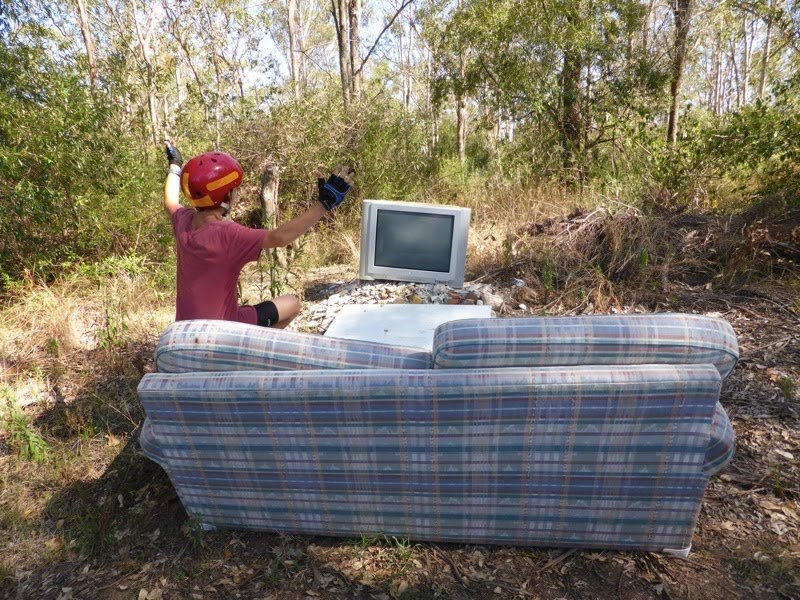 that is the problem. All species litter. It is only now what humans leave behind that is damaging. To mitigate toxicity in our environments, business should be taxed heavily on all products they produce deemed to cause a negative effect by what is left of independent science. These would include such things as fast food and supermarket packaging, pesticides, plastics, petroleum products and poisonous baits, etc. When we emerged from our lake hideaway in the morning we were greeted by a happy group who go by the name of the Picton Puffers, 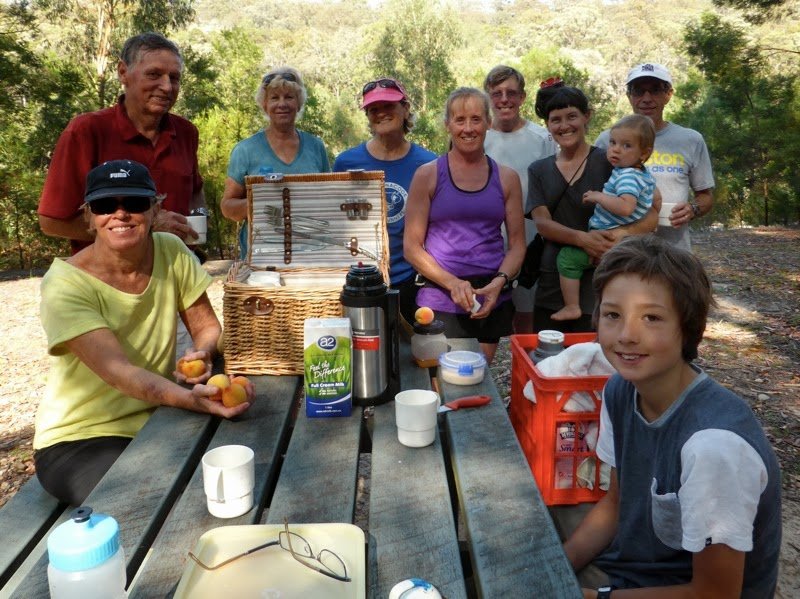 who offered us hot drinks, apple strudel and home-grown peaches. One enlightened soul from this gang of walkers and runners sang the praises of Sweden, who have laws that state that land owners must give one night’s access of a patch of ground on which travellers can camp. After a little research we discovered that this universal ethic is called Freedom to roam, and in Sweden is specifically called allemansrätten (the everyman’s right). Despite our increasingly privatised country, Australia is large enough geographically and still small enough in population to devise and implement our own rules for respectful, non-damaging and frugal travel. But alas, there are forces about that are against this ancient will-to-roam, as recently articulated by fellow camper, Bill Garner in The Age. We left the Puffers at Thirlemere Lakes, travelled on to Picton and camped beside a small creek that ran beside the town’s botanic gardens. We were told by the friendly council gardeners (who knew we were camping illegally and who encouraged our adventures) that the creek was inhabited by giant eels. 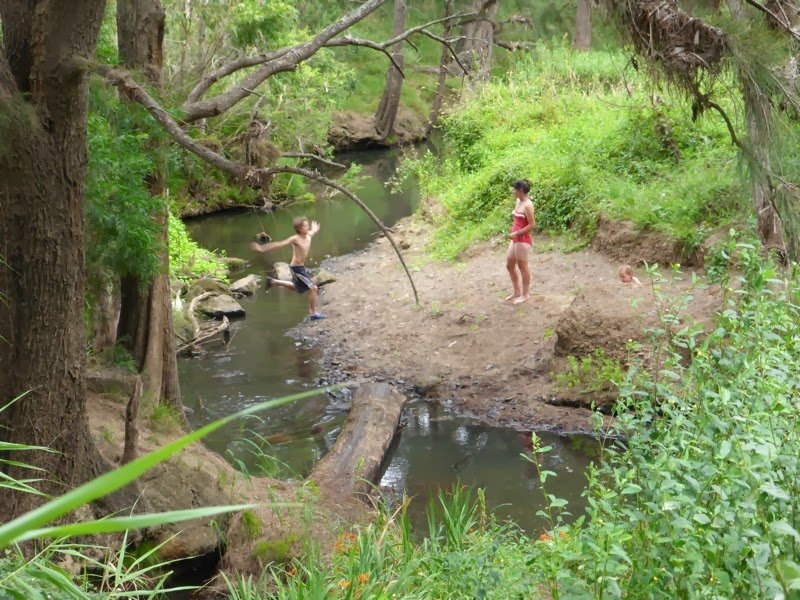 We didn’t come across any eels though there were plenty of ducks, prompting us to explain to the younger amongst us that semi-domesticated birds in a park are not fair game for food. We have never caught eels in Australia, although Meg caught and ate some in New Zealand many moons ago. They are something on our long list of autonomous meats we wish to hunt. 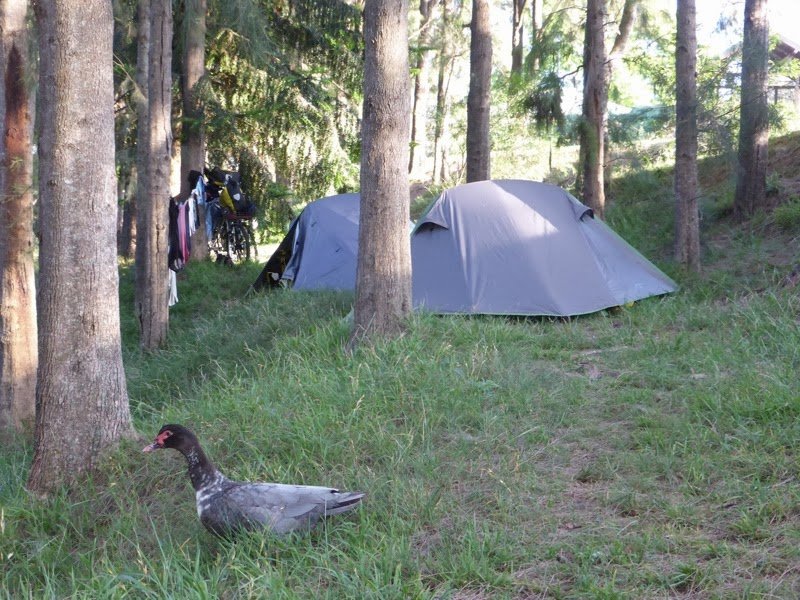 Another free meat that none of us have caught or consumed is carp, which is considered an environmental menace. So when we put up camp near the banks of the Nepean River near Wallacia 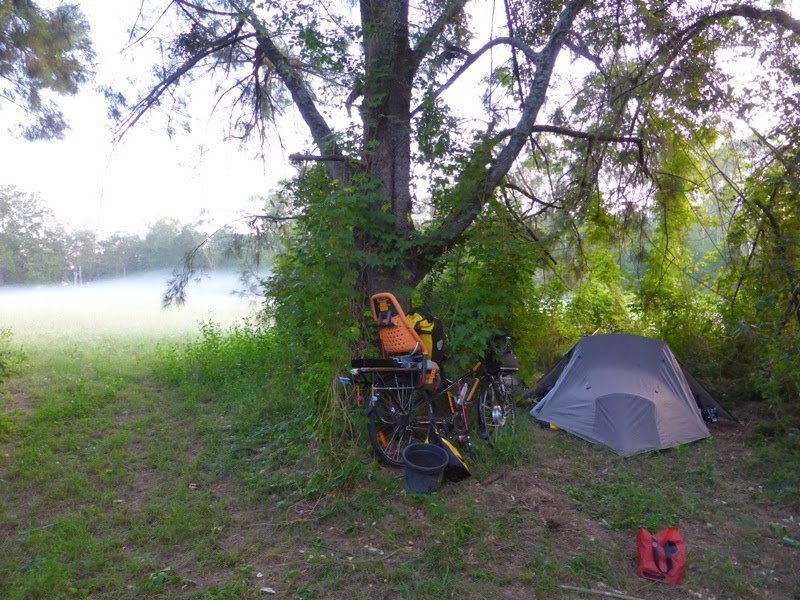 and set about fishing for Bass with surface lures, we very unexpectedly and unconventionally landed a good sized bottom-feeding carp. The young local boy who actually caught the fish was about to throw it back (after having his photo taken holding it) when Zeph asked whether we could have it. We knew carp would be good eating, despite the bad press it has in Australia, and after a little online research found that carp need to be eaten straight away or put on ice because as its body temperature rises it releases histamines that give the meat a muddy flavour. We did neither of these things, instead hanging the meat in night shade while we slept 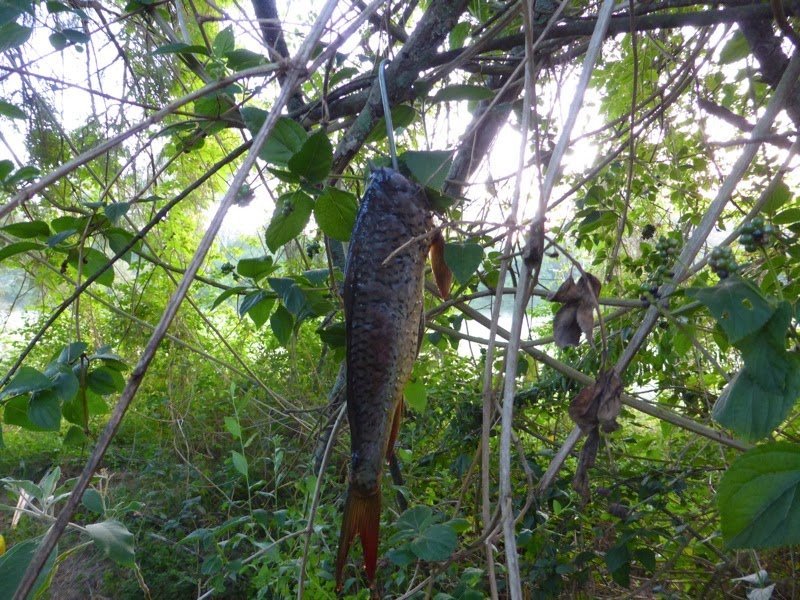 and cooking it for breakfast the following day in olive oil we’d bought in Sutton Forest, organic garden-grown garlic we’d bought in Tumut and roadside toms we bought in Warregamba. 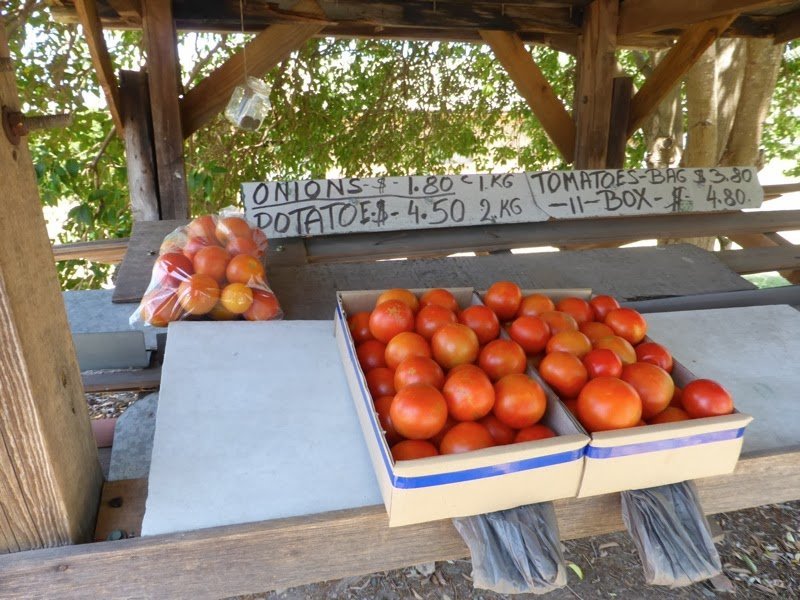 The result was delicious and we honoured this life by devouring every skerick of its wonderfully edible self as participants of the web of ecological life. 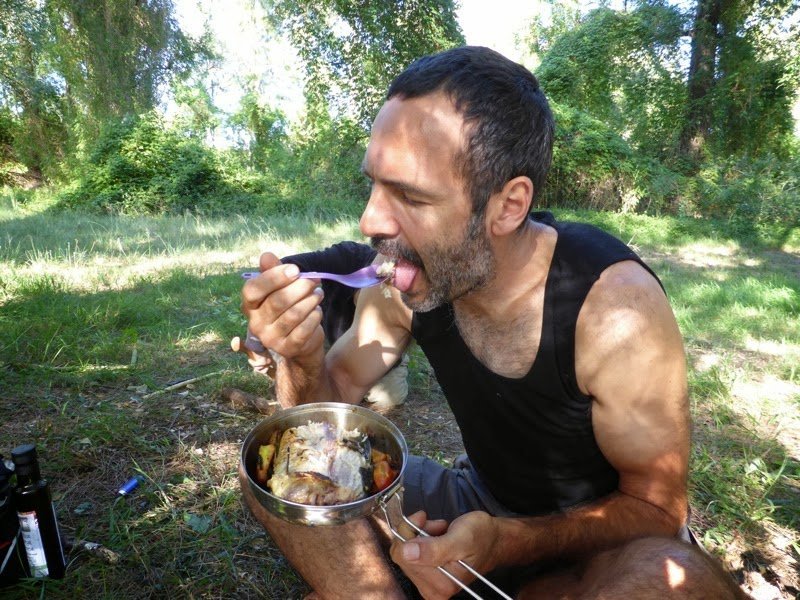 In order to move towards an ecological culture we need to become the biological controls, participatory ecologists (as our sensible friend Russell Edwards would say) and ecological playmakers (as we would say) that industrial culture has all but perverted in its short life. We need to reinstate a non-waste, non polluting sensibility in everything we do. It is not possible to do this if we go along with mainstream modes of living and ideologies, especially concerning travel and food consumption. All the prejudices surrounding the edibility of this now common fish dissolved with each mouthful. No muddiness was detected despite the Nepean being a heavily disturbed river with motor boats and storm water damage. People just aren’t hungry enough, proclaimed Meg. 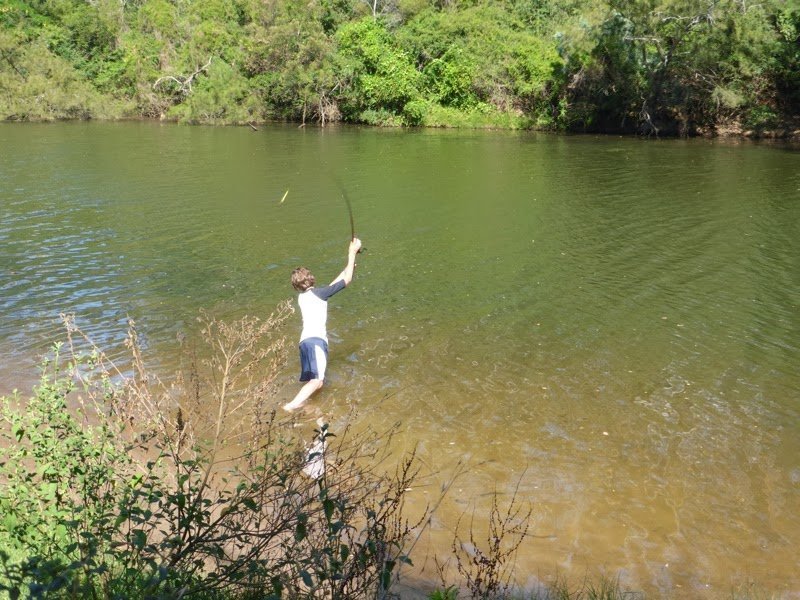 Carp now joins our growing list of desirable autonomous foods that need to be eaten on the long march from economic to ecological rationalism.

After a few days on the Nepean we left our blissful river camp of muddy swimming and fish treats and headed towards Penrith in near heatwave conditions. We decided to stow Zero in a box and jump a train from Penrith up to the Blue Mountains to escape the scorching heat that was daily progressing in the foothills. 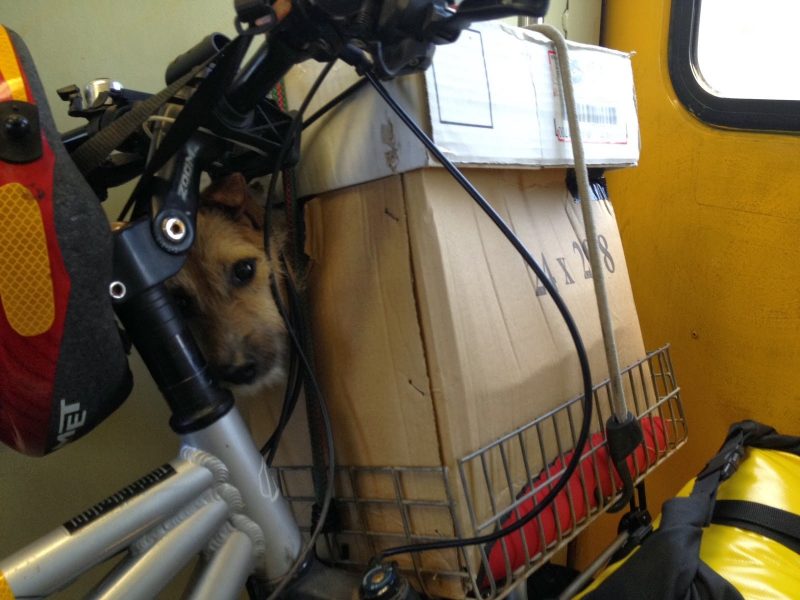 We spent a hot afternoon in Katoomba looking for a place we could secretly settle for a while and nearing dusk we met Shane, an awesome local who completely read our needs. He gave us a tour of some hidden locations, 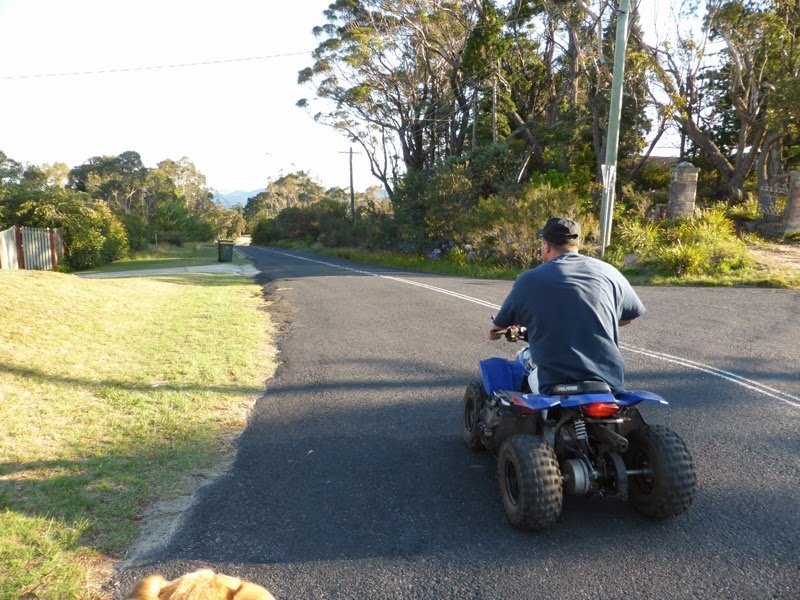 from which we chose our quiet little camp spot, 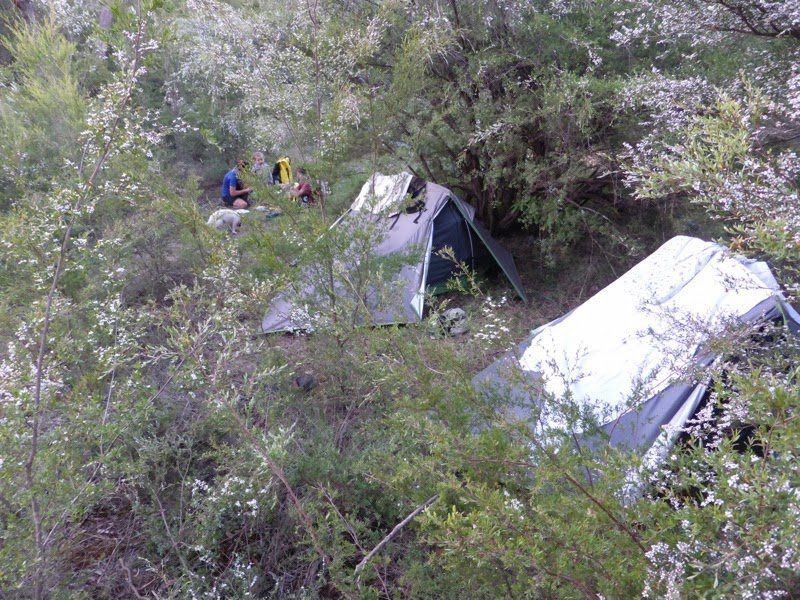 a ten minute walk to the heart of town, and only a two minute amble to this hidden away billabong. 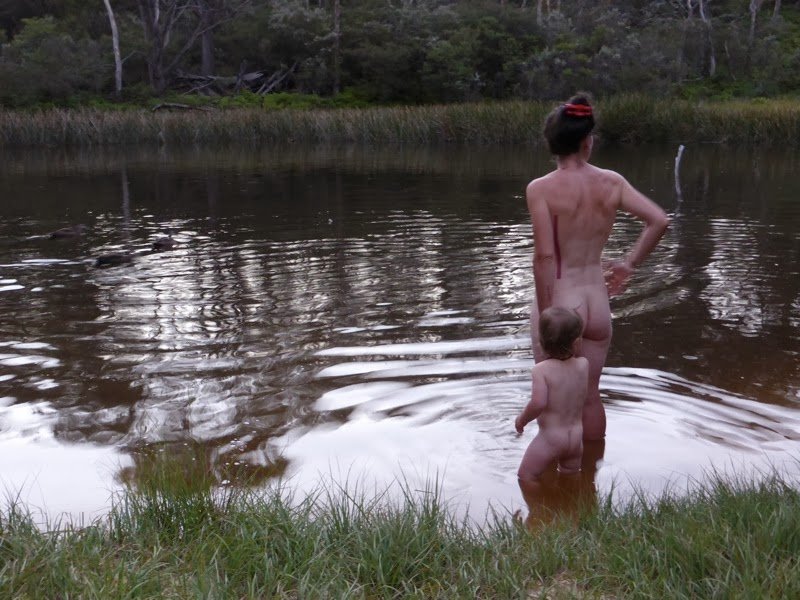 Shane, you are the embodiment of the universal spirit of the freedom to roam. Thank you! We will rest now and wash, 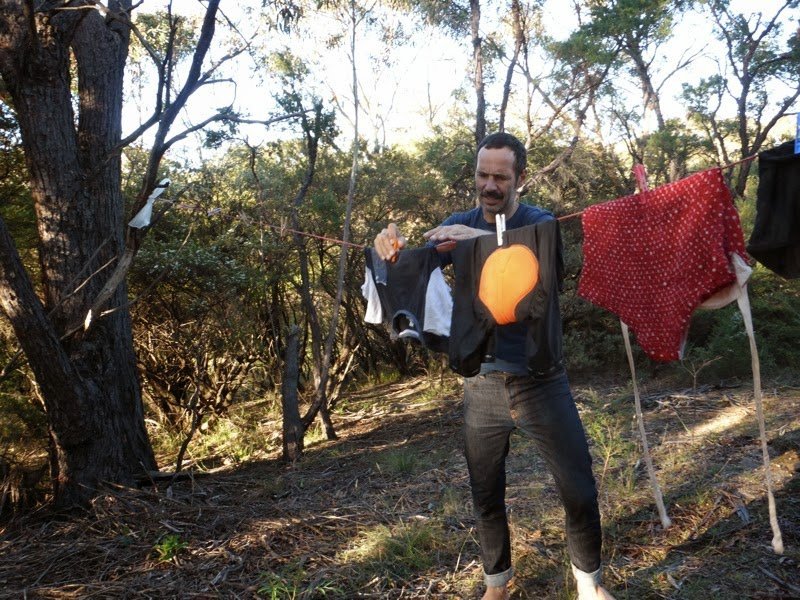 and bring you shortly, dear blog reader, a post or two of our Blue Mountains’ adventure.

Signing off with love and lessons learned for the future,